Would you like to be let in on a culinary secret?  No, it's not how to get a booking at Zingara Cucina (they have a website now - pah!  Sell-outs!) or where you can get the best donuts in Melbourne (in Footscray, of course!!)  It's how to make Chang's Noodle Salad, and gain access to an elite club of "in-the-know" peeps! 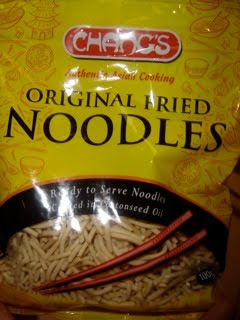 Chang's Noodles are from the supermarket and reside in the same category of "Chinese" food as lemon chicken and sweet & sour pork.  I had a school friend whose mum would make "stir fry" by putting cooked vegetables on top of these noodles and liberally dousing in thick, black soy sauce.  I wish I could say it was so bad it was good, but it wasn't.  It was just bad.

The recipe is found on the back of the packet.  Now, before you think I have lost myself in some sort of Prozac-popping, suburban nightmare of cooking things on the back of packets, give it a shot!  The salad is divine - fresh, crunchy and zinging with flavour.  Basically it's a combo of shredded wong bok (Chinese cabbage), spring onions, toasted almonds and crunchy noodles, with a sweet vinegar, sesame and soy dressing. 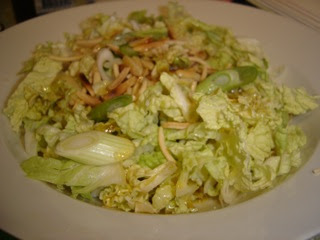 If you take it to a BBQ, everyone will fall on it, demanding the recipe.  It's up to you what you tell them!  (Just don't dress it in advance, or it will go soggy.)  When I have gone to a party and seen it on the buffet table, the host and I will lock eyes, tap the side of our noses, nod sagely and intone to one another: "Chang's".

From your local independent or duopolist supermarket, near the jars of Kan Tong

Posted by Lauren aka Ms Baklover at 8:17 AM