There is a Czech proverb I love, which can be translated as:


As many languages you know, as many times you are a human being.

Earlier this year, I decided to return to an enduring passion of mine - languages.  I grew up bilingual in English and Auslan, speak good French and decent Modern Standard Arabic.  I spent the first half of 2015 revising my French and Arabic, and on 3 June, hopped a plane to Paris! 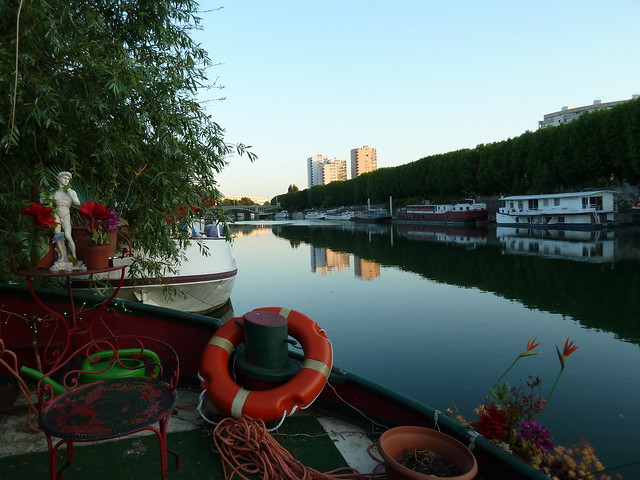 Yes, this is the reason I have been AWOL for the last few months. I stayed in wonderful places throughout France, from this houseboat on the Seine to a country home among the cherry orchards of Ardèche. 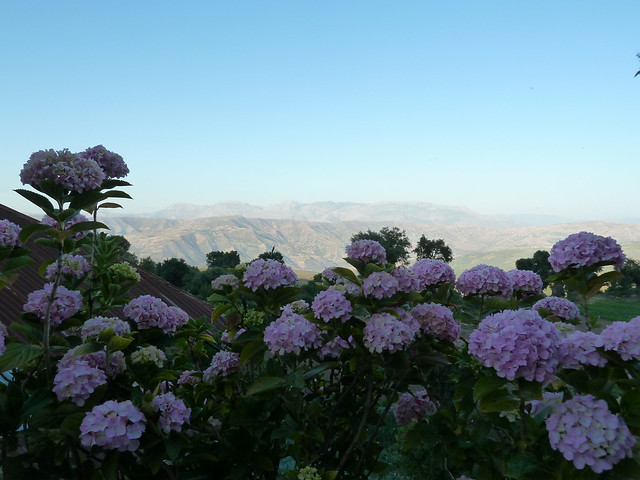 From Marseille I flew to Morocco where I spent three weeks at a language school, studying the Moroccan dialect. 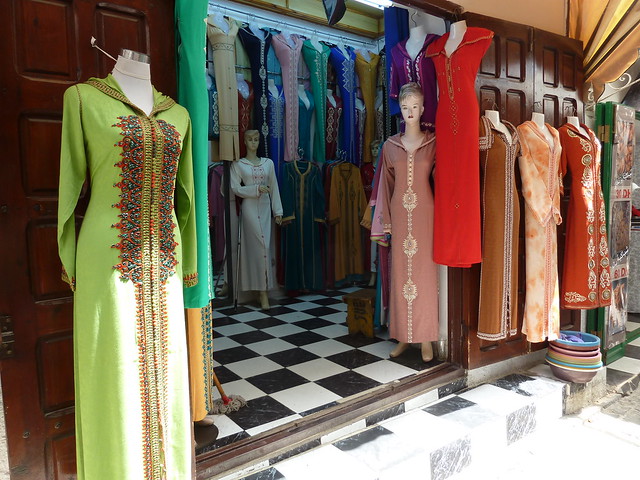 I lived with a local family, shopped in the wonderful old city full of twisty-turny lanes and had numerous days where I spoke absolutely nothing but Arabic. 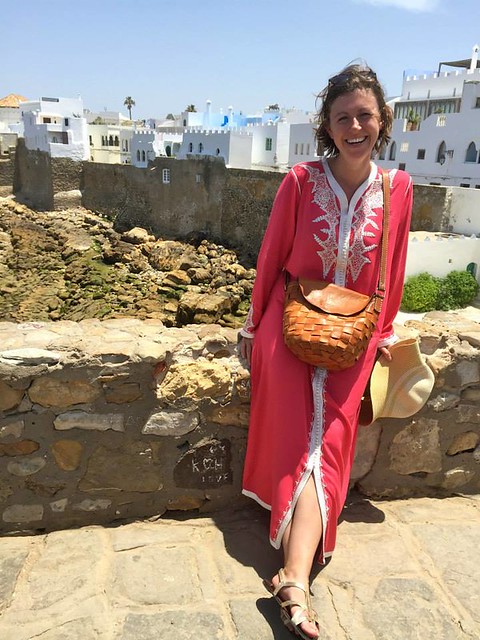 On a linguistic note, it was a very fast switch to go from Modern Standard Arabic to Darija (North African dialect).  If you are studying MSA and despair that everyone thinks you sound like Chaucer - with the right tuition, you can move very fast to a dialect. 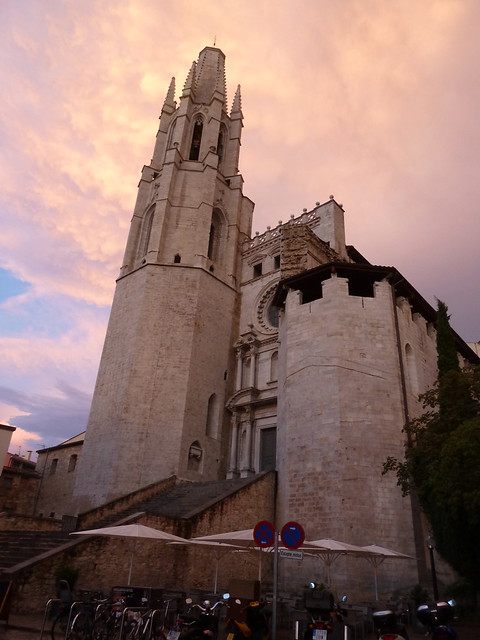 From Morocco I flew to Spain, or more specifically Catalonia.  Catalonia is an autonomous region in northeastern Spain - Barcelona is the capital.  Catalan - not Spanish - is the native language, and what most people speak on a day-to-day level.  It was a fascinating experience to see such a strong and proud minority language at work. 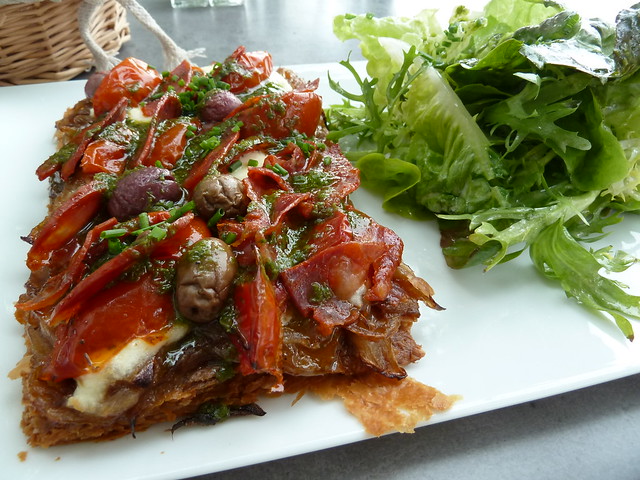 But what about the food, you say?!  Here are just a few tasty highlights.  This pissaladière was possibly the best thing I ate in France.  It's a sort of savoury tart, this one on gorgeous, burnished puff pastry, layered with anchovies, beautiful tomatoes, olives and cheese. 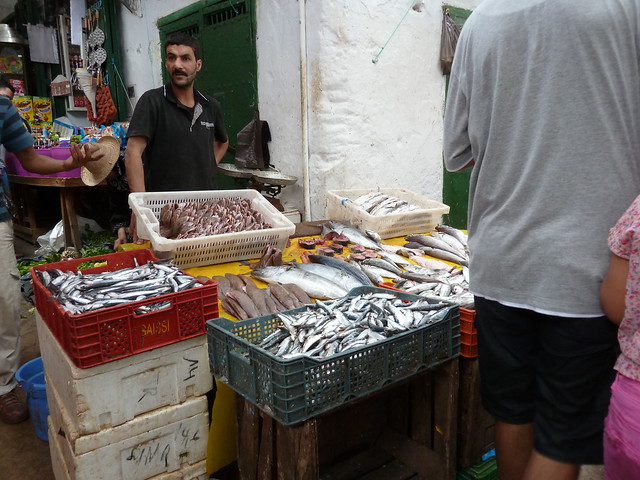 I ate so, so much incredible food in Morocco - of which I have virtually no pictures.  Most of it was eaten as breaking of the fast meals in Ramadan, the Muslim month of fasting.  So a., no pictures because there is a spiritual element, and b., I was honestly so starving by the time it rolled around I just shovelled it in! 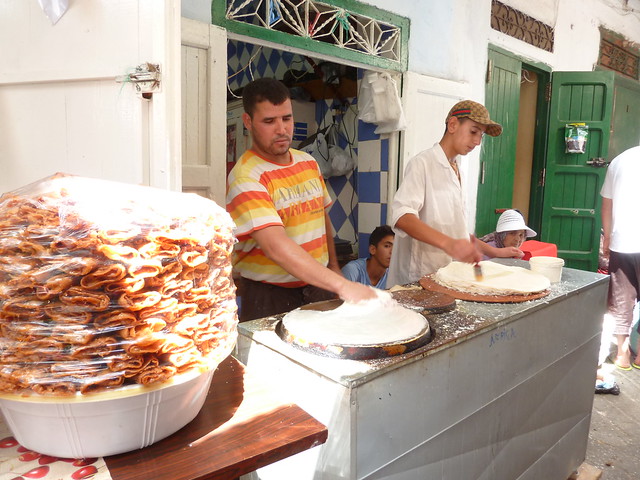 Here is "warqa" pastry being made - sort of like filo or spring roll pastry.  I never did not see the guy on the left working at this stall, no matter what time of day (or night) I went past.  This would be used to make wonderful little pies filled with chicken, green olives and preserved lemon. 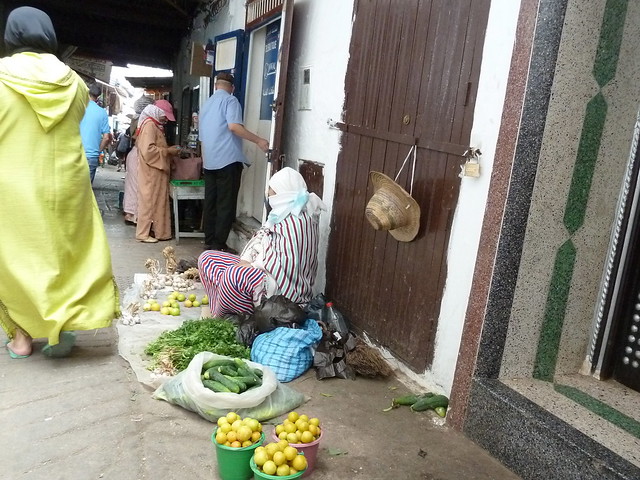 In the town I was living in, women would come down from the mountains and sit in the alleys of the walled city, selling bottles of homemade yoghurt, homegrown garlic, fruit or eggs. 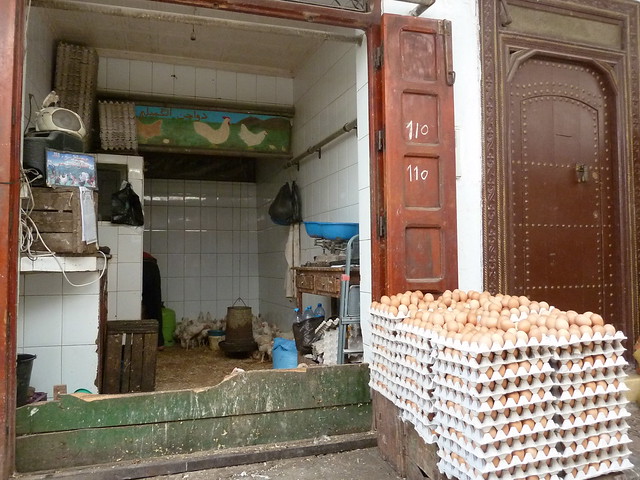 People generally shop daily and everything is just so fresh.  As in - this is the chicken shop!!!  As in, you choose a chicken, and they kill it for you! 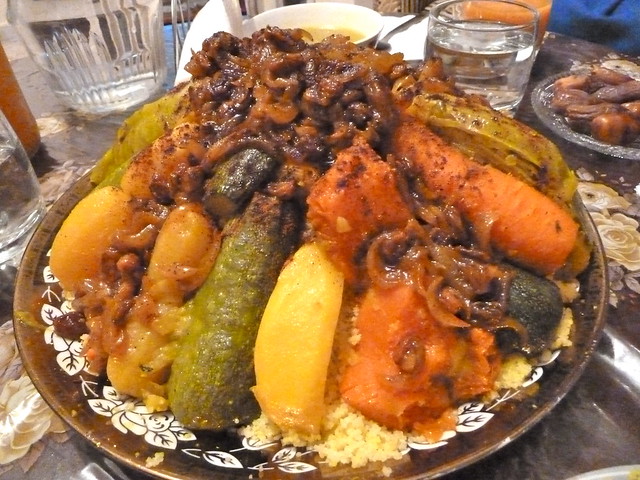 In three weeks in Morocco, I only ate couscous about three times!  It is not something people eat very much at home, or at least not in the region I was in.  On the contrary, there was lots of bread - one variety that was essentially roti, various yeasted loaves, and little breads that looked like English muffins which my host sister would fill with meatballs, cheese, olives and mayo to make delicious Moroccan sliders. 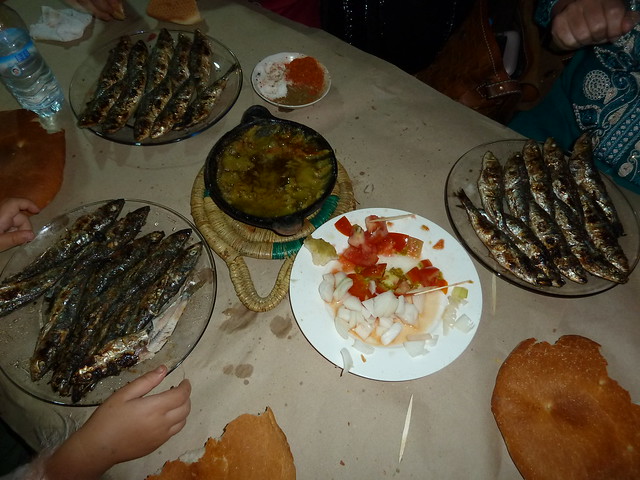 Fresh sardines by the beach with my host family, served with bread, a thick split pea soup/dip, and a plate of chopped onion and tomato doused in vinegar.  About $1.50 and one of the best things I've ever tasted.  I ate a lot of fish - I loved one particular tiny variety that were battered and eaten whole, bones and all.  The weirdest thing I ate was snail soup - the snails, with brown and cream-striped shells, float in a dark, herbal broth.  You pull out their long bodies with safety pins.  They taste like mushrooms! 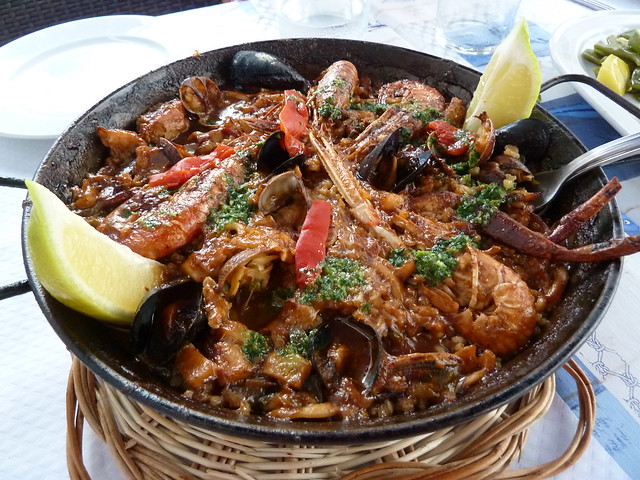 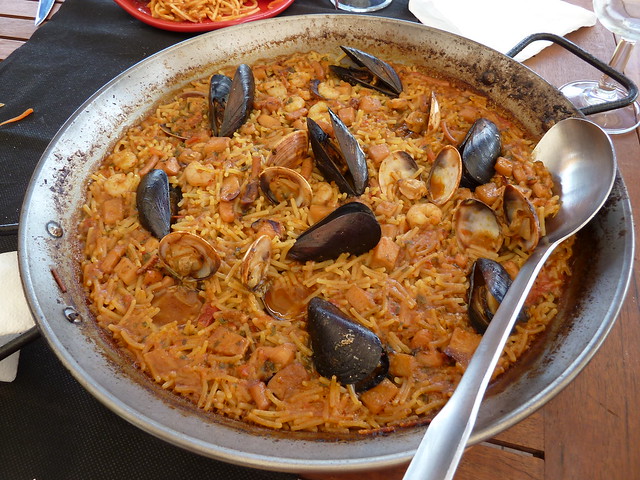 ...and also so amazing was fideuà, which is a Catalonian version of paella, made with short spaghetti. 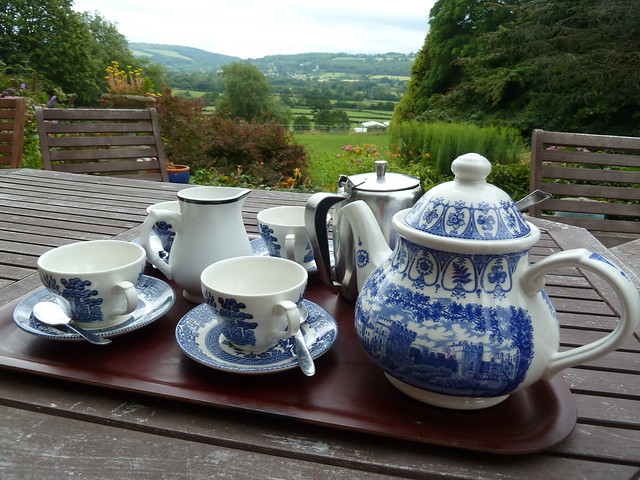 From Spain we travelled to the UK to see family and friends. 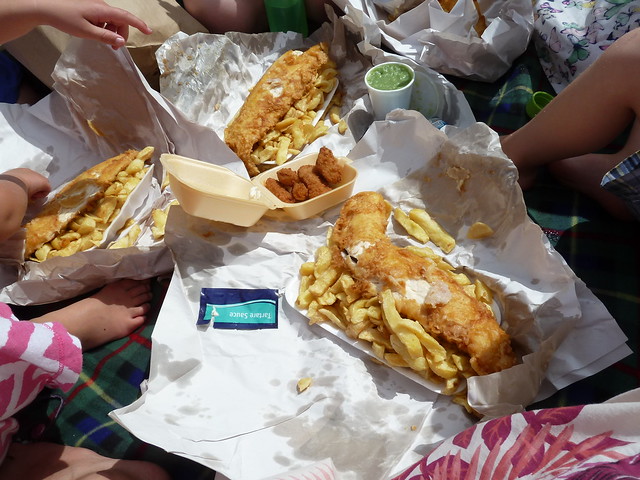 I couldn't get into the warm, flat beer, but my traitorous tastebuds found this traditional English fish and chips so delicious and better than anything I've had in Oz for a long time.  When I got home, I smelled something acrid in my room, and opened my bag to find my Australian passport singed around the edges. 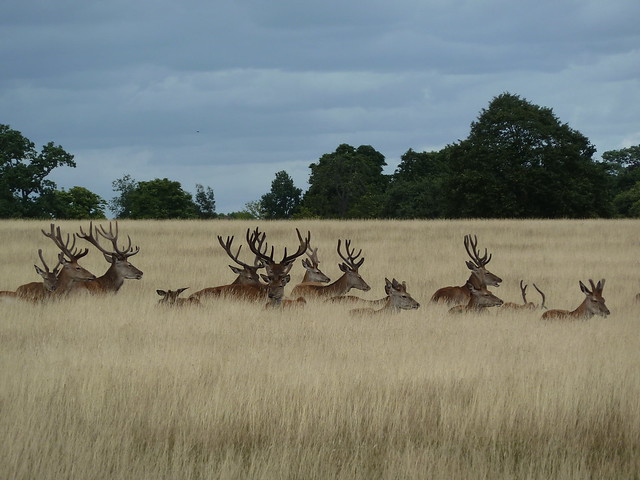 That Czech proverb I mentioned before can actually be translated another way:


For every language you speak, you live a new life.

I have been reflecting a lot about this blog.  I have decided to put it on an indeterminate hiatus.  There is only so much time in both a day and a life, and after many years of happy blogging, I now want to use my time to do other things. 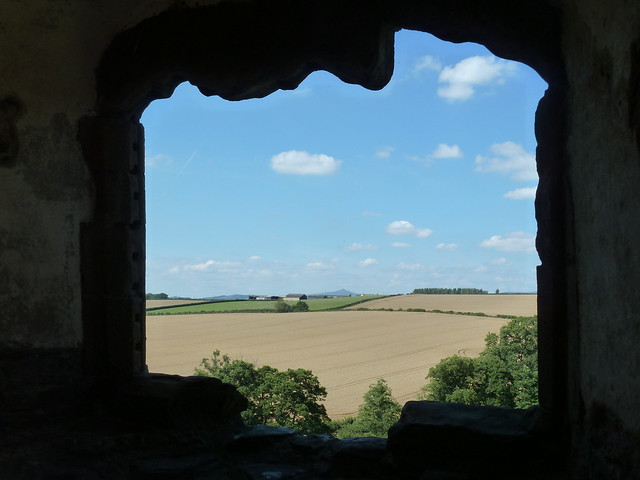 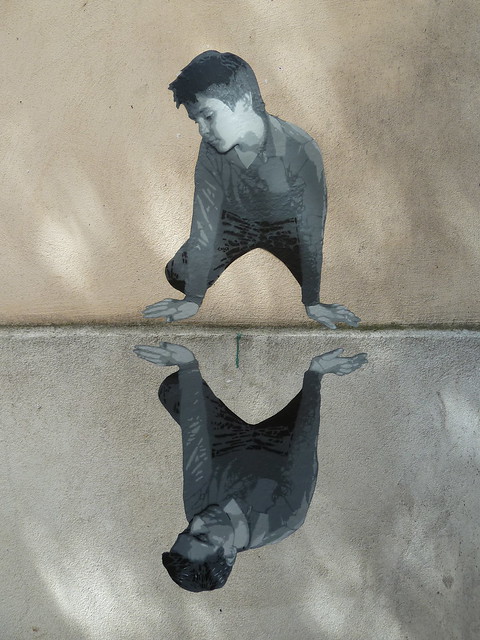 Frankly, though, I never set out to be an unofficial PR agent for the west.  Even if I didn't realise it at the time, this blog started as a way for me to get over the deep feelings of isolation and confusion that I experienced as a new mother.  I felt isolated geographically, and as a younger mother who was still at university and had never had jobs beyond waitressing and office temping, I felt very confused about what had happened to - or what I was doing with - my life.

I used to read a blog occasionally about another younger woman's experience of motherhood.  It was called "Once Edible, Now Consumed".  I identified very much with the feeling of being consumed - both in the sense of being swamped by the demands of mothering, but also with the sense of lost potential, that my life had taken a turn that did not fit with "the plan".

This blog was a big part in turning that feeling around.  Some incredible experiences have blossomed from it, from becoming a writer for The Age, Time Out and Broadsheet despite having no writing qualifications; running really fun and well-researched food tours for the CAE and then as part of my own business; running delicious dumpling-making workshops; and coordinating the truly epic 2014 Rickshaw Run for the Food & Wine Festival.  The exhilarating afternoon after the Rickshaw Run finished and the morning my first cover story was published were truly some of the best moments of my life.

Thank you for coming with me on this wonderful journey.  Keep eating and loving the western suburbs.  And may the (pork) floss be with you!