Authenticity is a concept as slippery as one of Marco Polo's noodles.  Many great dishes start out as haphazard "fusion foods" that, accidentally or otherwise, strike a new and harmonious chord.  That most classic of Thai foods (or at least as seen by Westerners), Pad Thai, is merely a Thai take on Chinese fried noodles.  Pho, arguably the pinnacle of Vietnamese soups, is actually a fairly recent invention, a happy menage-a-trois between Chinese noodles, a French-style beef broth, and plenty of fresh Vietnamese herbs.  I am particularly fond of Indian Chinese food or "Desi Chinese", an Indian take on perceived Chinese classics.  Gobi Manchurian is one of my favourite dishes at the moment - think battered cauliflower, a la sweet & sour pork, but tossed in a dry red sauce of chilli, cumin seeds, soy sauce and curry leaves.


But as well as perfect harmonies, there are a few clangers out there, like Phil's recently discovered Hawaiian spam sushi.  Sometimes the fusion isn't really conscious but just comes from making do with local ingredients or cooking things in a local style.  This can of course produce some fantastic results, like banh mi, but it doesn't always work.  I have cooked some shocking things from cookbooks over the years which were lazily made "Asian" by dousing in sweet chilli sauce.  Such ignorance is reflected in Rachel Ray's (a popular cooking show host in the US) "Phunky Pho", a "Thai-inspired soup... loaded with exotic flavors!"  As someone in the comments said - "Phucked-Up". 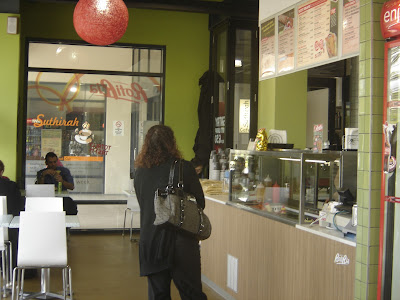 I had driven past Roti Ria in Sunshine to and from my new favourite place, Sunshine Plaza (Aldi, Best & Less, the Reject Shop and Not Quite Right all in a row - go western suburbs!!)  Unreal, I thought, a Malaysian place just down the street!  One lunchtime I hastily scuttled over there and waltzed expectantly up to the counter.  I expected a steaming bain marie of coconutty delights, perhaps the clang of wok sang on wok out the back as a char kway teow came to life, but I was greeted instead by shredded iceberg and cubed tomato. 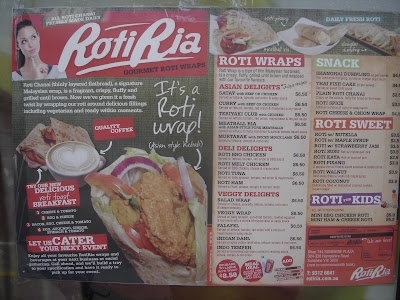 Roti Ria is a regular sandwich bar that uses roti chanai or Malaysian bread as a wrap or as they put it, "Asian style kebab".  As well as sandwich bar standbys such as tuna and falafel, it offers fillings such as beef or chicken satay, murtabak (spiced ground lamb) and vegetarian tempeh (compressed soybean cake).  Sort of a Malaysian take on Subway, perhaps?  Incidentally, roti itself is a kind of fusion food, having been brought to Malaysia by Indian migrant workers, hence the fact that 'roti' is available in Indian restaurants, albeit totally different to Malaysian roti.
Well, I was disappointed.  I wanted my authentic roti, sambal and curry sauce on a steel plate, preferably with a Milo dinosaur on the side.  The service was delightful but it was with a heavy heart I ordered a beef satay wrap. 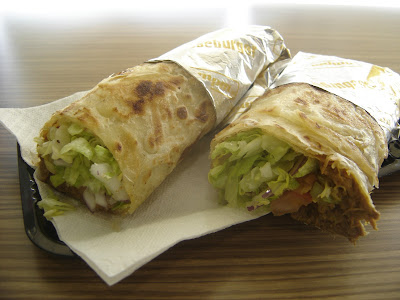 Beef satay roti wrap, $6.50﻿
My "Asian style kebab" arrived on a disposable plastic plate (come on!!  That is just lazy.  Points off.)  The roti itself was nice.  They are pre-made and warmed through on a flat plate.  The satay beef was also nice - very mild, very peanutty, and the beef my favourite way - slow-cooked for so long that it was so tender you could shred it with a fork.  But I just couldn't get over the shredded iceberg, bits of tomato, and overpowering onion rings.  I kept having flashbacks to my teenage years eating gut-mangling souvlakis from Hollywood Palace in Richmond, which came with the exact same toppings.  Maybe if the filling was a posh baby lettuce mix I could have dug Roti Ria, but this time I just wanted "authentic".  It might be a slippery concept, but sometimes you just dig your heels in and refuse to slide any further.