When faced with a difficult problem, we tend to branch out, meandering down different avenues of thought, doubling back on ourselves, searching for the answer.  The walking metaphor fits my ongoing, seemingly intractable problem - my ongoing yen for good coffee within walking distance of my house.

I am very, very fussy about coffee.  My parents cottoned on to espresso early, and I remember many Sundays as a child slurping a lemon granita at Pelligrini's, belly full of yum cha.  When we were out with my mum, we would enter what seemed like cafe after cafe, as my mother searched for "proper coffee."  You see, in the 80s, espresso machines were nowhere near as common as they are today.  She would peer around the counter and more often that not, shuffle us three kids out, saying loudly, "No, wrong machine."  I was permanently mortified - why couldn't my mum & dad just drink instant like all the rest of my friends' parents?

My sister and brother must have been indelibly scarred from this experience, as both cannot stand coffee.  I, on the other hand, am probably the fussiest coffee drinker I know.  I find myself doing the same thing as my mother now.  If I can smell burned milk or that dirty, stagnant coffee ground smell, I give it a wide berth.  If the milk is frothed by leaving the jug wedged unattended on the grate, roiling stormily, I will just have an orange juice.

But as I cannot find the answer to my question - somewhere within walking distance that makes a fantastic latte - perhaps it's time to question whether the question itself is wrong.  Read on. 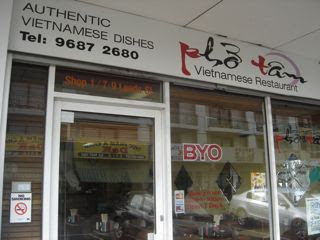 Pho Tam is tucked away on the edge of the Footscray CBD, at the corner of Leeds & Ryan Streets.  Its corner location means two windows face the street, and it's so enjoyable to watch the people going about their business, shopping at the grocer and the live fish shop opposite. 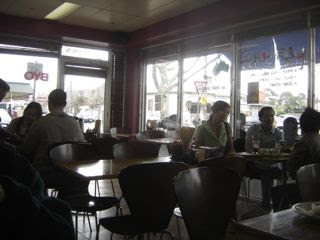 A new friend and I met here for lunch, and chatted until the busy restaurant emptied and only we were left.  We started with rice paper rolls or goi cuon filled with bi, shredded pork skin. 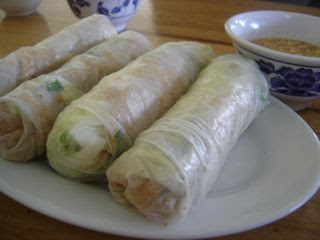 Goi cuon bi, $6
Although the server kindly brought us our own individual bowls of dipping sauce (a seasoned fish sauce sprinkled with peanuts, rather than the thick peanut or hoi sin dipping sauces usually served with rice paper rolls), unfortunately the rolls were not that great.  They had been premade and sat for too long in the fridge, so that they were cold and the skin had hardened.  The bi had very little flavour and was too chewy. 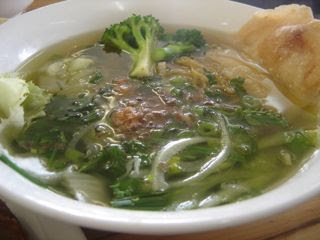 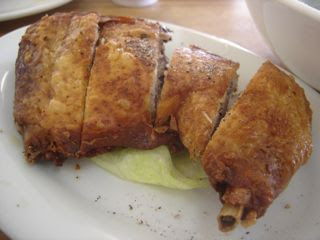 Hu tieu mi ga don, $9
I chose hu tieu mi ga don, or egg noodle soup with fried chicken.  Sadly the chicken was very much reheated and had become somewhat dry and grey.  The soup, however, was very good, with a zesty (MSG-enhanced) broth, al dente egg noodles, and topped with excellent vegies such as garlic chives, lettuce, broccoli, and fried shallots.  It was accompanied by a large crispy cracker. 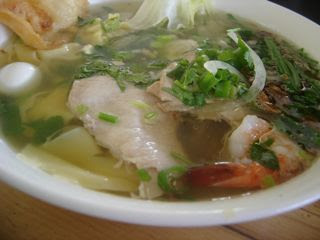 Won ton (hoanh toanh) soup with prawn & pork, $9
My friend chose the won ton noodle soup with prawn and pork.  It was recommended that she have mixed rice and egg noodles.  A few won tons nestled under slices of pork, a prawn, vegies, a cracker, and a quail's egg.

The meal was all right, but nothing too phenomenal.  Phu Vinh nearby do similar excellent egg and rice noodle soups.  Pho Tam have a secret weapon, though, which I will get to.  I returned recently to see if I was missing something with the food. 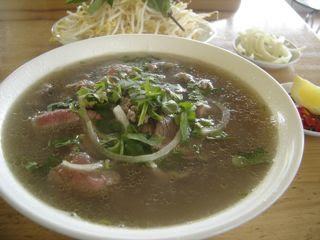 Pho bo tai, $8
There's probably a reason they are called Pho Tam rather than Hu Tieu Mi (rice/egg noodle) Tam - the sliced beef pho was phenomenal!  A medium-sized bowl arrived, wafer-thin meat cooking quickly in the hot broth.  It was accompanied by the classic bean sprouts and Thai basil for tossing in, as well as raw onion slices, lemon, and chilli.  One slurp and I was in heaven.  The broth is so flavoursome, with much less MSG than the chicken version I had sampled the previous visit.  The aromatics in the pho broth really stand out, particularly star anise.  The actual meat itself may have had a little less flavour than that at Hung Vuong, for example, but a quick dip in a dish of chilli sauce rectified that.
I am so glad to have found their specialty.  They are very much a Vietnamese restaurant - no huge menu of Chinese-style meats with black bean, satay, Mongolian etc.  The menu is very accessible, though, with lots of pictures and detailed explanations of all the ingredients in a dish. 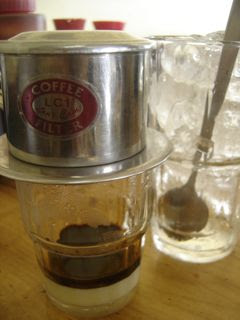 But the real thing that keeps me going back is their iced coffee.  Most restaurants pre-brew their coffee and mix it with condensed milk behind the counter before presenting you with a glass.  Pho Tam, on the other hand, give you a glass of ice and another with a small layer of condensed milk.  Perched on top is a tiny coffee filter contraption shaped like a coffee cup itself.  The hot coffee slowly drips through holes in the bottom.  When it is fully drained, you whip up the coffee and condensed milk before pouring it over the ice.  As the ice melts, it waters down the condensed milk and coffee slightly, creating a long, cold drink.  Absolute heaven. 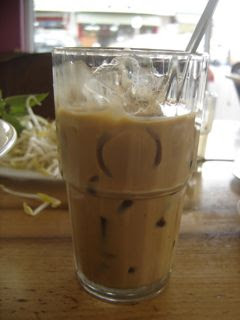 So all this time, great coffee has been right under my nose - just not hot Italian espresso coffee.  Come summer, you will find me in here, coffee at my elbow, accompanying meal or not.  Who knows, perhaps I'll see another mother, kids in tow, peer through the window at the silver filter contraption before exclaiming "right machine!" and settling down for a well-earned glass herself.