On a recent post, a reader left a link to a recent article in the Herald Sun which highlighted the shocking underpayment of a chef at Camy, much beloved for its notoriously abrupt service and dinginess but above all unbelievably cheap dumplings.  We are aware of the need to seek out fair trade goods produced overseas but it is horrible to think that within Australia, workers are being exploited on the other side of the kitchen wall as we chow down on cheap food obliviously.

What is the answer?  A boycott of Camy seems called for but what of the article's mention that "the case is being watched anxiously all over Chinatown with employees of several other eateries poised to take action over underpayments"?  Who is underpaying staff, then?  We really have no way of knowing.  One way to at least make an informed guess might be higher prices, as opined by the reader, or perhaps a more professional and streamlined fit-out. 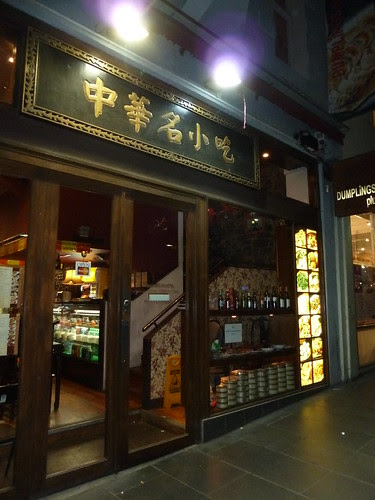 Dumplings Plus is far from a dingy dumpling den.  It's on Swanston Street at the site of a long-closed Mary Martin bookshop and after that I believe another Chinese restaurant. 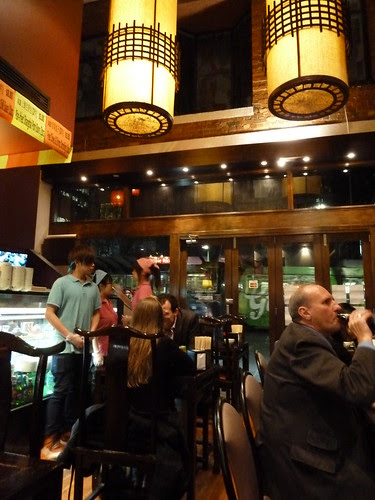 It's kind of lavish but understated inside with bluestone walls overlaid with minimalist but imposing latticework and red fabric decorations.  Big toasty gold lanterns like ceremonial drums hang from the ceiling.  All very Forbidden City. 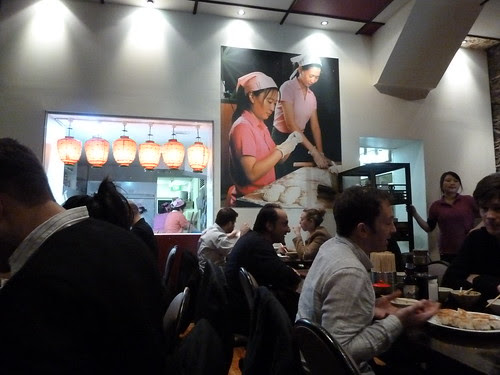 The staff are young, have natty pink uniforms and there is a nicely-dressed maitre d' to seat you.  A window allows you to watch the chefs delicately pleating dumplings (is this now de rigeur for any self-respecting dumpling joint?) 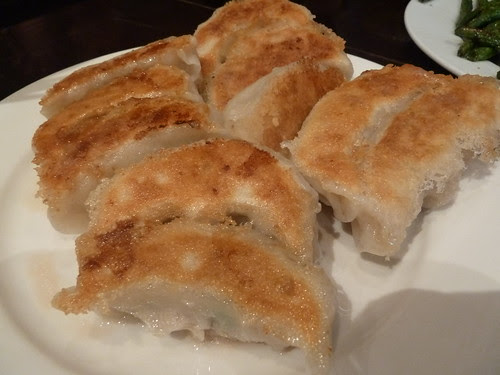 Pan-Fried Pork Dumplings (10 pieces), $8.80
So, compared to Camy (15 dumplings for $7.50), these are "expensive".  Really though, I don't think you can bitch about $8.80.  Compared to China Red (8 dumplings for $10.80), this is cheap.  Does this mean fair wages were paid?  I don't know.  Probably more to the point, how did the (undoubtedly battery) pig live?
I will leave the talk of ethics here as sometimes it all makes you want to lock yourself in a dark room, but all these are really valid things to at least be mindful of.  And besides, you probably want to know about the taste!  In a word - unreal.  Tasty, juicy meat, not-too-thick skins, crusty, crispy fried bottoms.  They were fantastic!  These seemed more similar to Cantonese jiao zi than the rounder Northern style at other places.  My only complaint was they had evidently been put in the pan two by two which meant that some of the skins had ripped where they were joined, meaning that some of the lovely vinegary juice had been lost. 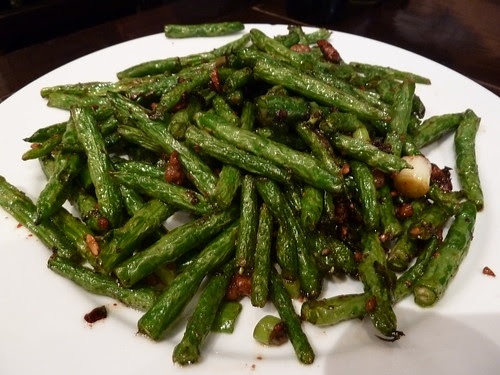 Fried String Beans with Minced Pork, $14.80
One of my all-time faves.  Well-fried green beans with a scattering of pork mince that burst with soy and ginger flavour.  This had a more dark soy than XO sauce flavour but it was delicious, albeit pretty salty.  I would be happy with just this and rice. 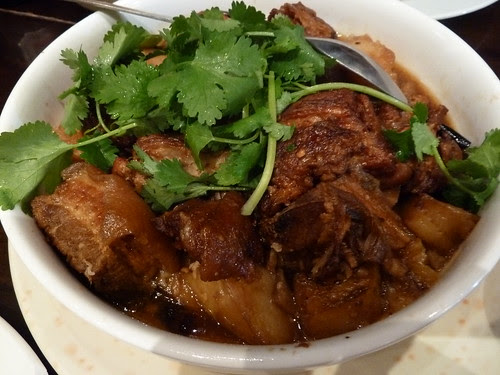 Shanghai Style Stewed Pork Belly, $17.80
This was a bit of a clanger, unfortunately.  The picture made it look like dong po pork, Hu Tong's version being a small ruby-red square of heavenly pork belly, cooked to melty perfection.  This seemed really homestyle with chunks of braised belly and potato in a basic sauce.  The pork was so strong though and tasted almost muddy.  It was a bit like a Chinese version of bangers and mash - boring but OK if that's what you are after. 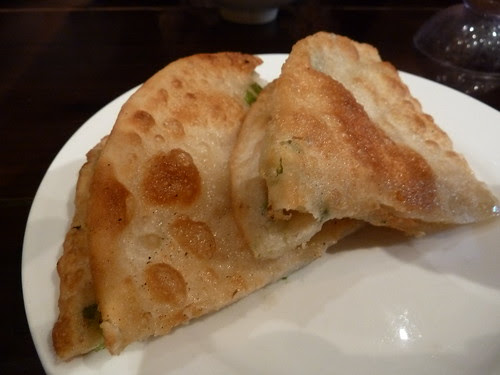 Grilled Pancake with Green Onion, $4.20
These are always good - fried dough, what could go wrong?
Given that Hu Tong is impossible to get into without a booking, Dumplings Plus is a winner in my book for walk-in, tasty and - yes - cheap dumplings.  Their xiao long bao and prawn & pork wontons in soup also come recommended (I had bad XLB recently and have had to take a break from them).  I will watch the outcome of the Camy case with interest and if that means I end up paying a few dollars more for my dumplings in the interest of fair wages, that is absolutely fine with me.