This is a sponsored post for Australian Mushroom Growers' "Mushroom Mania" campaign.  The Mushroom Mania campaign is on for all of July 2012 and over 2,000 restaurants are participating by putting delicious mushrooms on the menu.  Please see end of post for full disclosure.

Once upon a time both the church and the corner pub were local meeting places where people could bump into each other.  This sounds throwaway, but that casual running into people and just knowing people's faces is an incredibly important part of feeling like you belong to a community.  Now, just as many churches are being decommissioned, we see many corner pubs closing and being turned into apartments (think The Albert and The Buckingham in Footscray). 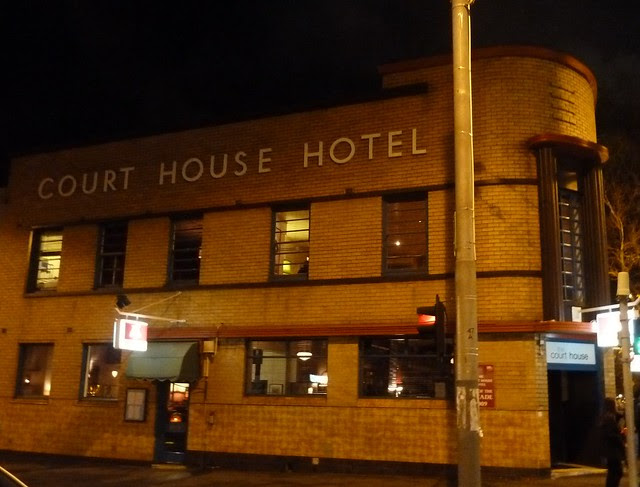 It is possible to reverse this trend and the Courthouse in North Melbourne shows it how it's done, creating a modern yet still genuine pub, a new community hub that feels quite timeless. 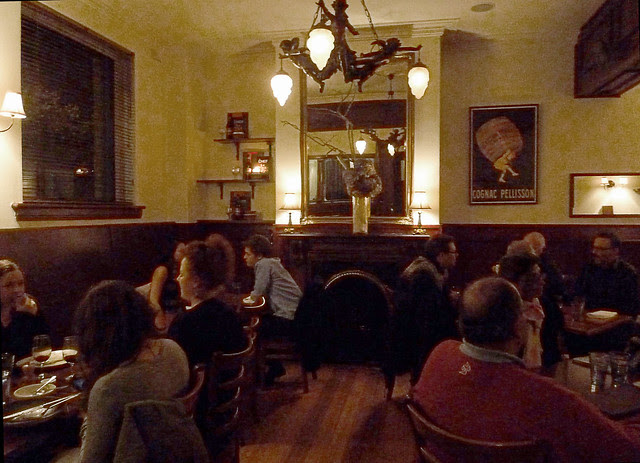 Running in its present form since about 2002, the Courthouse is a great multitasker, marrying a classy Euro-feel bistro with a front bar that takes craft beer seriously.  I love the intimate dining room with its Art Deco (I think?) light fittings, fireplace and dark wood panelling that feels straight out of Paris... 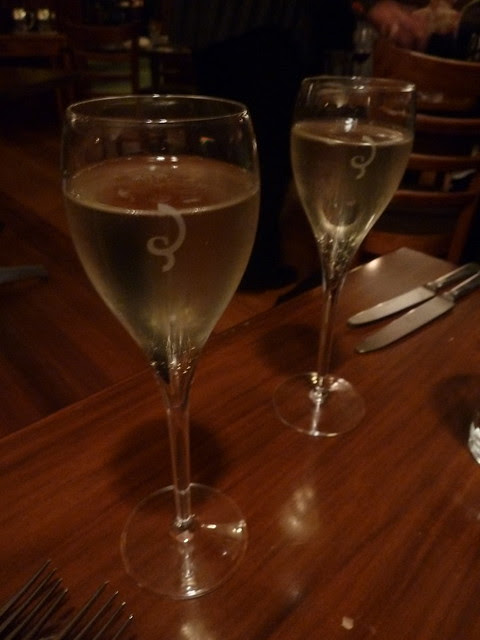 ...hence French bubbles are a necessity!  The wine list by the glass is small but confident - two sparkling (one dear, one not) plus about ten reds and whites that eschew stock shiraz and semillon for more interesting European varietals. 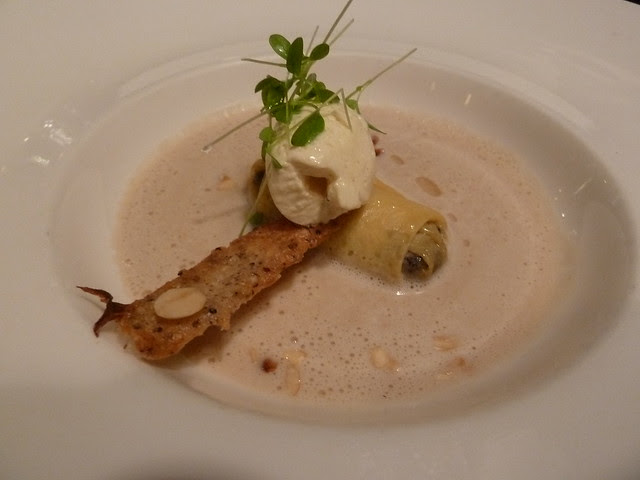 The Courthouse are big on making everything, I believe right down to their bread, and this dish, although small, had so many delicately formed components.  Frothy chestnut soup surrounded a delicate parcel of earthy braised wild mushrooms.  The silky, dark mushies had the intriguing tingle of fennel seed, which provided a counterpoint to the rest of the dish's richness. 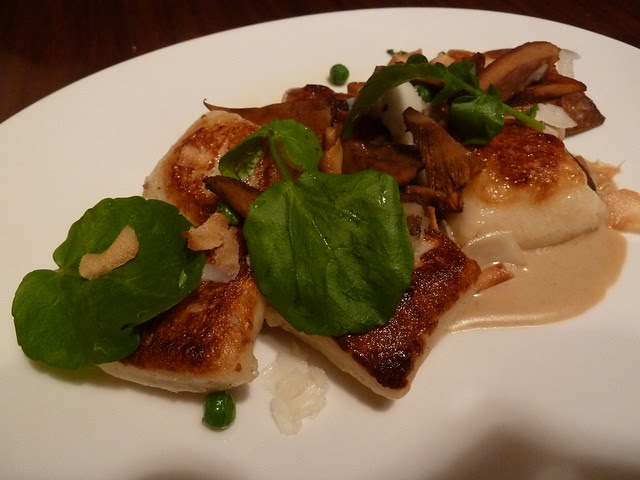 This dish had a family tree of mushroom varieties, if you like, from good-natured, populous wild and cultivated varieties, to the regal, more often dried porcini, to the big chief of the mushroom world - the truffle, here gently infusing hard pecorino cheese.  The pan-fried mushies tumbling over the gnocchi were gorgeous, from juicy little buttons to slices of wild varieties that had such an interesting texture with an almost meaty grain.  I found the gnocchi surprising at first, as they were more like large potato dumplings - I know, that's what gnocchi are! - but once I got over the expectation of cloud-like little balls and enjoyed the contrast between creamy interior and crispy edges, it was delicious. 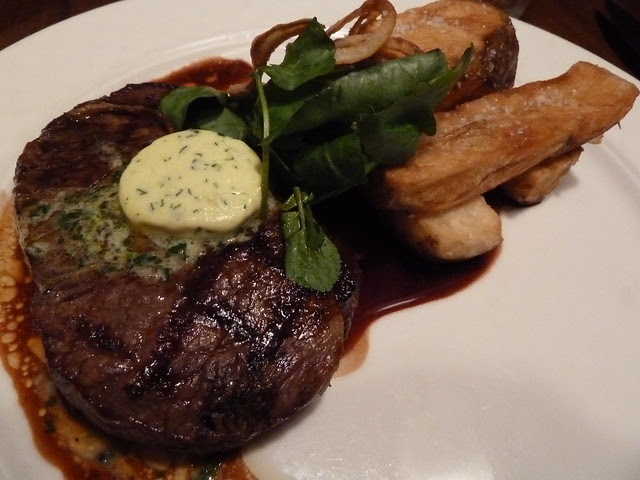 Come to Mama!  Gorgeous juicy steak, its juices muddling with the fabulous seasoned butter and facilitating much happy swiping of chips.  Ideally I think this dish needs to be augmented with a side, but we were still content at meal's end. 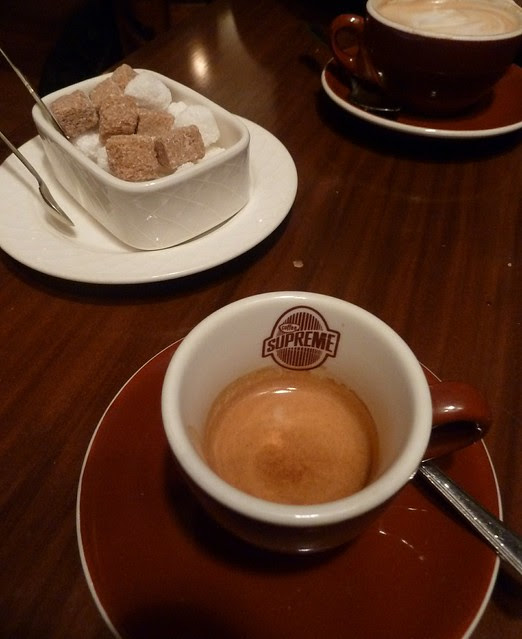 Good coffee topped it off.  The service at the Courthouse is really good too, attentive and genuine.

This is a great local secret, for me best saved for special occasion dining, but I'd happily have a Temptress every week in the front bar.

Disclosure:  This post is the first in a series of three for Australian Mushroom Growers' "Mushroom Mania" campaign.  I had free choice of any three participating Victorian restaurants and was required to choose at least one dish in which mushrooms were the "hero" ingredient.  I am being paid a flat sum for my writing which does not include meal expenses.  The restaurants were not aware of exactly who was visiting and when but may have been aware that they would be reviewed at some stage over the course of the campaign period.  Australian Mushroom Growers and The Courthouse have not sought nor been given any editorial control of this post.

Posted by Lauren aka Ms Baklover at 8:44 AM