Disclaimer:  I attended Shimbashi Soba as a guest of the proprietor.  Please see end of post for full disclosure.

What are your recipe deal breakers?  Will you stuff, bone and truss, or are you a chicken shop boy/girl?  (I confess I'm the latter.)  Do the terms "soft crack" and "hard ball" freak you out?  (They're used in confectionary making, you dirty person, you.)  I know for me, a terrible afternoon with a bowl of dough, a slow-press juicer, a vapid instruction manual and a clothes horse festooned with claggy strips of home-made fettuccine meant that I will never, ever attempt to make my own pasta again.  Same goes for noodles.  And anyway, why bother, especially when we have so many wonderful specialty noodle shops to choose from? 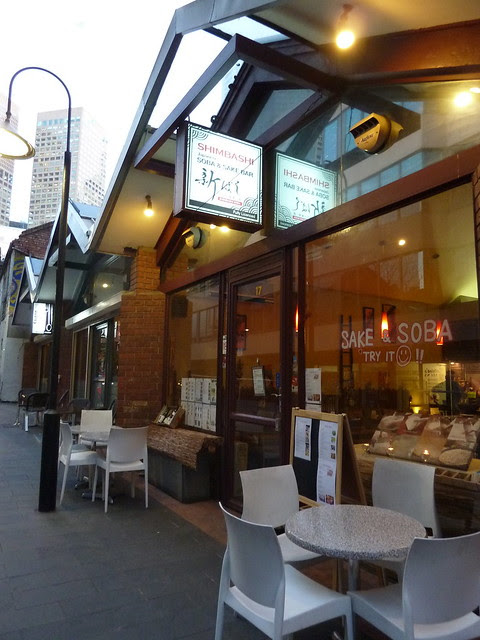 Shimbashi Soba has recently opened in Liverpool Street, Melbourne and specialises in making soba noodles from scratch...and I mean scratch. 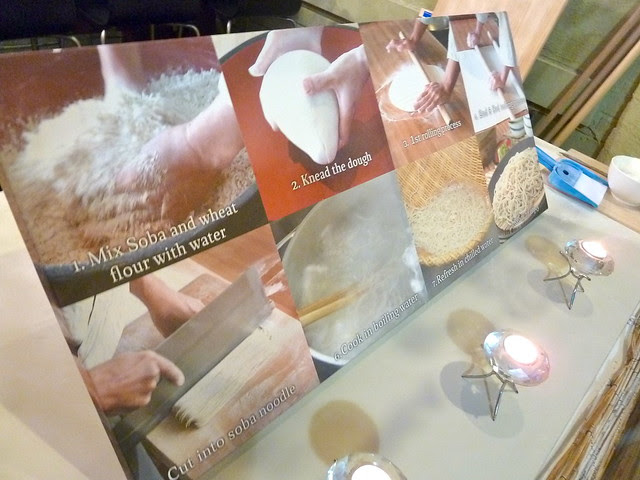 The noodles begin life as Tasmanian buckwheat kernels (grown chemical free) which are ground in house daily on a slowly turning millstone.  The freshly milled flour is then mixed with a small amount of wheat flour before being kneaded, rolled and chopped just hours before service.  With the exception of the miling, the production is totally non-mechanised, with Chef Taka Kumayama rolling, folding and - with eerie precision - cutting the buckwheat noodles into uniform lengths with an imposing steel blade.  You can catch him in action in the window of Shimbashi between about 10 and 11am, and again in the afternoon if there's a soba rush at lunch.  (Check out this pictorial of a soba noodle workshop in Tokyo.) 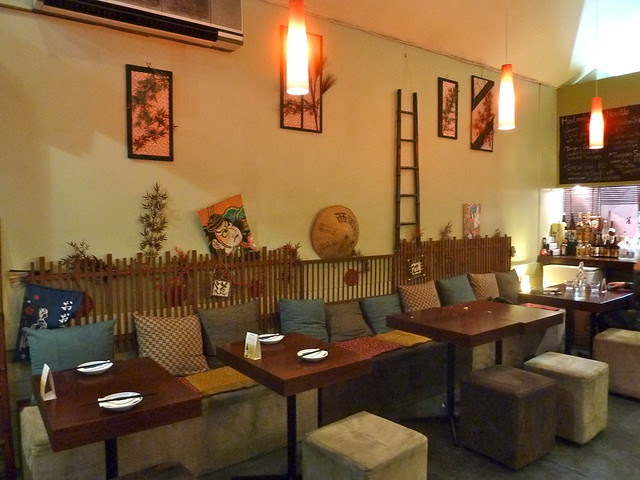 I've tried to make soba from packaged, dried noodles in the past but it's never been very nice, the dried noodles turning soft and claggy very fast.  It was the chance to try hand-made soba that piqued my interest when contacted by Chef Taka's lovely friend and ex-colleague Harumi, who is helping with the PR for his new Melbourne venture. 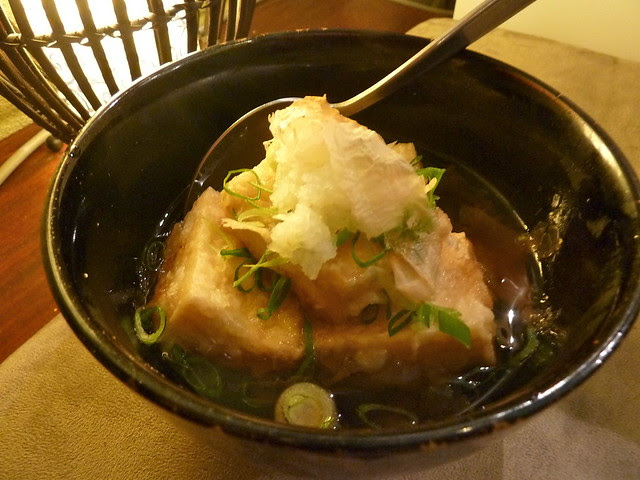 I love going somewhere and just saying, "Feed me food".  The Japanese have a word for it - omakase, which means you're in the chef's hands.   We couldn't resist making some suggestions as well, though!  This agedashi tofu was good - it's a deliberately benign dish, the neutral, slightly savoury tofu in harmony with mild dashi-based dressing.  Loved the touch of very authentic grated daikon on top.  More bonito flakes though please! 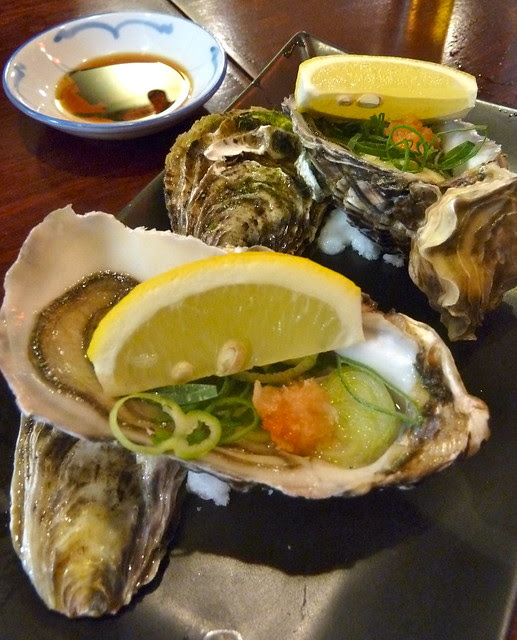 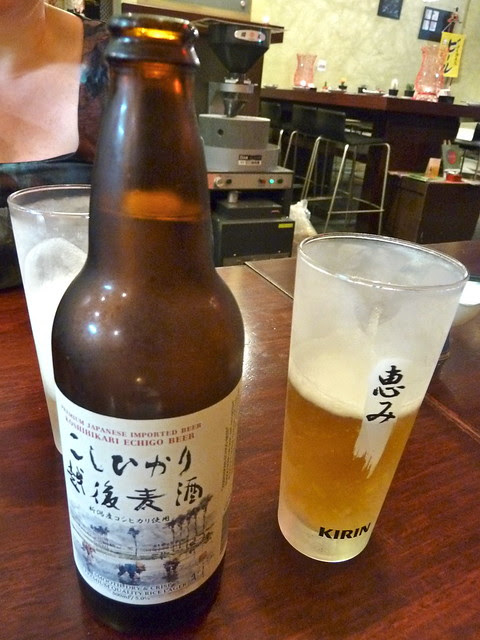 Shimbashi have an impressive Japanese drinks menu with interesting sake and plum wines.  This beer, made with short-grain sushi rice, was utterly crisp and delicious. 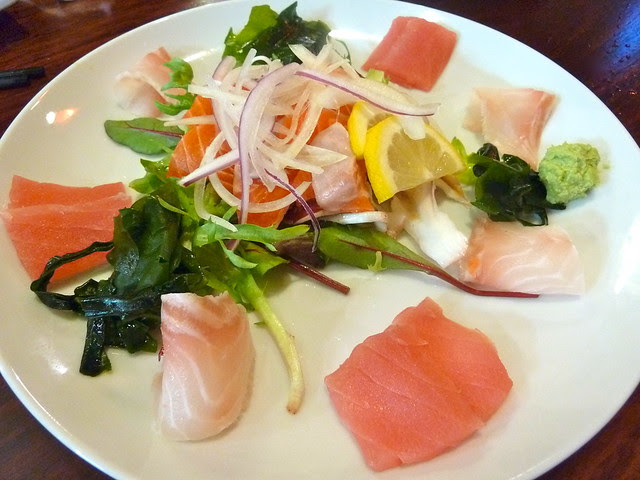 Anyone who eats with a food blogger knows their meal is not their own for at least 30 seconds after arriving on the table.  I'm not as "bad" as some - one friend has been known to commander your lunch, carrying it off to a sunlit windowsill for a photoshoot before you're "allowed" to tuck in!  It's telling then that I was so excited when this arrived, for the first time ever I had to be reminded to take a photo. This sashimi was divine.  Getting away from the salmon/tuna/something white tired triumvirate, we had Tasmanian ocean trout, sand marlin and classic, rosy tuna.  This combo changes daily according to what the chef finds at the Vic Market.  Sublime. 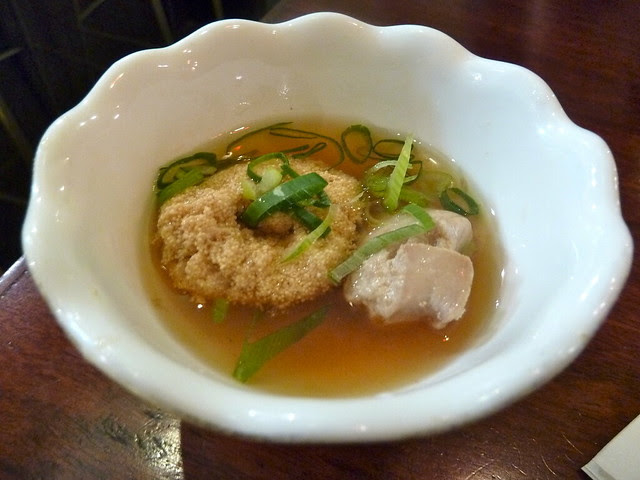 "Ooh, lovely!" we exclaimed on being presented with this little dish.  We should have stopped right there and tucked in, but I had to ask, "What is it?"  Turns out it is fish eggs and milt or fish sperm sacs!!!  Apparently Chef Taka found a lovely pair of striped jack, a kind of mackerel, at the market that morning, from whence these delicacies came.  So we stared.  We spun the bowl.  "I don't think I can do it," said my friend.  But we did, and boy was it good.  The eggs (on the left) had a grainy texture and a not unpleasant fishy taste (like tuna), but the fishy boy parts (shirako) on the right were delicious - smooth and buttery, not unlike pate or brains.  Definitely the strangest thing I've eaten all year, and probably the most surprisingly delicious! 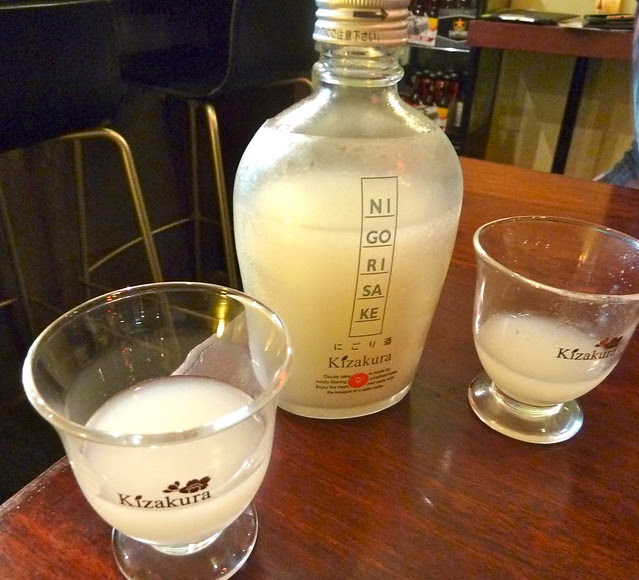 This is a new discovery for me (thanks K!) and I LOVE it.  It's called nigorisake and it's sake (or rice wine) that is unfiltered, leaving it with a creamy, viscous texture not unlike drinking yoghurt.  It's served chilled and is delicious, both sweet and tart at the same time.  If you want some street cred, try ordering this next time you go Japanese - it's relatively unknown and boy, is it YUMMY. 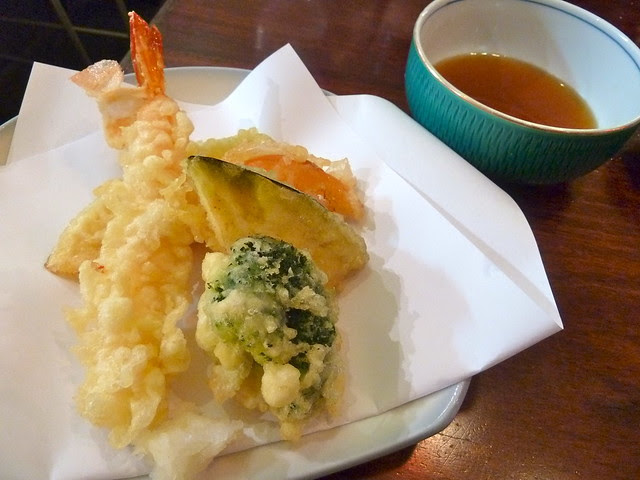 Delicious tempura, featuring Aussie prawns from the Vic Market, eggplant, broccoli and other vegies.  It was served on paper as is traditional, to demonstrate the chef's skill in making it non-oily. 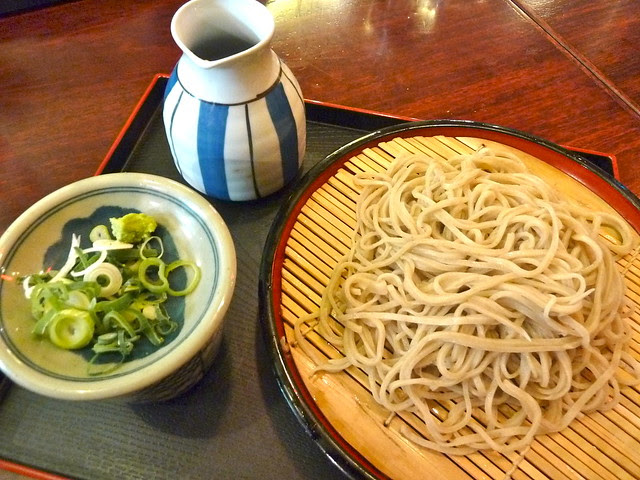 The grand finale!  Soba can be served hot or cold but this is the most traditional way.  The noodles are served chilled on a traditional mat (once upon a time, soba noodles were steamed on a mat like this).  Under the bowl of spring onion is a small cup.  A thin, soy-based, ever so slightly bittersweet dressing (tsuyu) is poured from the small jug into the cup, and each chopstickful of noodles is swizzled briefly before being guzzled up.  The idea is to "haul in" the noodles quickly without having to bite them off.  Slurping is not considered impolite and heightens the sensation of silky soba entering your mouth.  The noodles have such a distinct, earthy flavour - delicious.  I love the ritualistic way of serving and eating too. 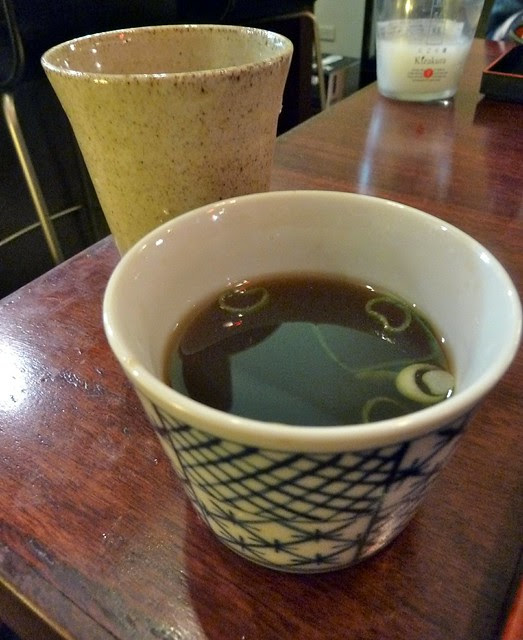 Soba have vast health benefits including being very high in protein and various polyphenols and bioflavenoids.  The broth soba are cooked in is very nutritous and it is traditional to mix a little with the leftover dipping sauce for a final drink.  This was delicious, balanced and soothing. 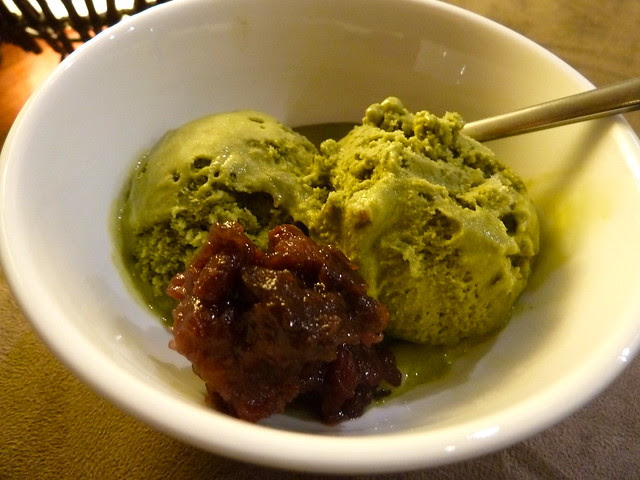 LOVED this - house-made green tea ice cream, ever so slightly bitter and with an intriguing graininess (from the finely milled matcha or green tea).  It married perfectly with soft, sweetened adzuki or red beans.  YUM. 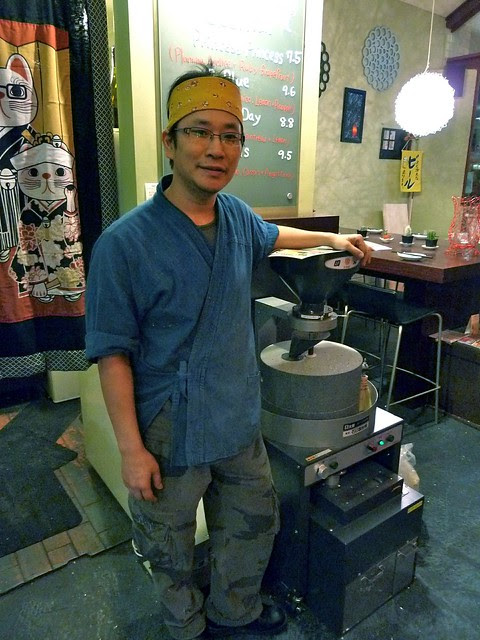 Here's Chef Taka Kumayama with his stone-based buckwheat flour mill.  The Shimbashi "brand" has a history that warrants explanation.  A chef named Yoshinori Shibazaki opened the first soba bar in Sydney in 1994, committing to making soba traditionally and later, grinding his own flour.  Success led to a partnership with a Singapore company, R E & S Enterprises, and Shimbashi Singapore was opened in 2003.  Chef Taka (above) had been making soba in Sydney for "Soba Master Shibazaki", as he is known, and he was then sent to oversee operations in Singapore.  Mr Shibazaki has now moved back to Japan, having sold his Sydney business and later opening and also selling another soba bar on the Gold Coast.  Chef Taka has now migrated to Melbourne, owns this restaurant independently and, due to his longstanding association with Mr Shibazaki, has been given his blessing to continue using the same traditional methods and recipe as the original Shimbashi restaurant in Sydney. 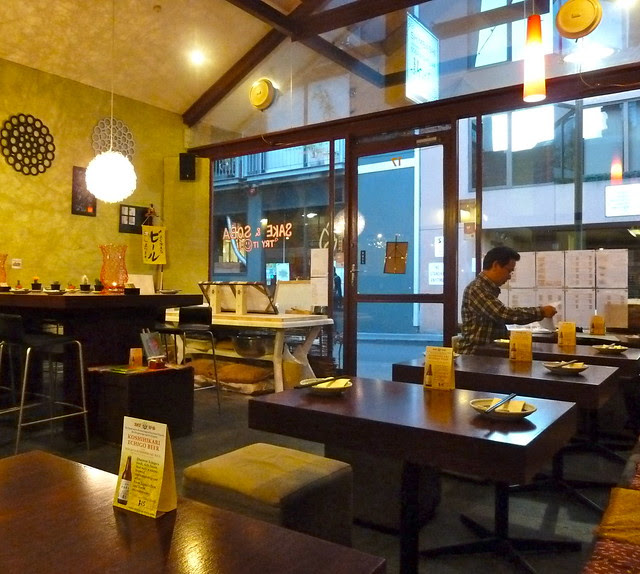 So come for the soba and stay for the unique sake and well-made Japanese fare.  I know there are plenty of good Japanese places in town, but the soba really makes Shimbashi stand out.  The interior, while unpolished to a degree, is quaintly charming in its homeliness.  Chilled soba, sashimi and sake in the peaceful laneway on a hot summer evening sounds like a definite plan.

Chef Taka is very focussed on good ingredients and it shows - his signature dish, warm soba noodle soup and duck is coming soon.  Speaking of recipe dealbreakers, anything involving duck is another one of mine, so duck and hand-made noodles sounds like a most delicious plan!

Disclosure:  I attended Shimbashi as a guest of Chef Kumayama, which means a guest and I did not pay for our meal or drinks.  We left it up to the chef to design our meal but we selected our own drinks.  This offer was not conditional on subsequently writing a post.  Shimbashi has not sought nor been given any editorial control of this post.

Posted by Lauren aka Ms Baklover at 7:30 AM