This is a commissioned post by the Australian Mushroom Growers' Association for "Mushroom Mania".  The Mushroom Mania campaign is on for all of July 2013 and highlights the amazing mushroom dishes on offer at cafes, bistros, clubs, pubs and restaurants across Australia.  Check out their competition where you can win one of 40 $100 restaurant vouchers!  Full disclosure at end of post.

Imagine you've just landed in Melbourne and, wide-eyed, take the Skybus to the CBD.  Hearing of this city's marvellous food, you decide that what there is a lot of must be the city's most iconic food - and so your first meal in Melbourne is a Pie Face pie.  (What in the world do they use to draw those faces on - it grosses me out thinking about it!)  Luckily, if you applied the same logic when arriving in Palermo, I have it on authority your first meal would be a heaping plate of rosticceria - and your face would be a very happy one. 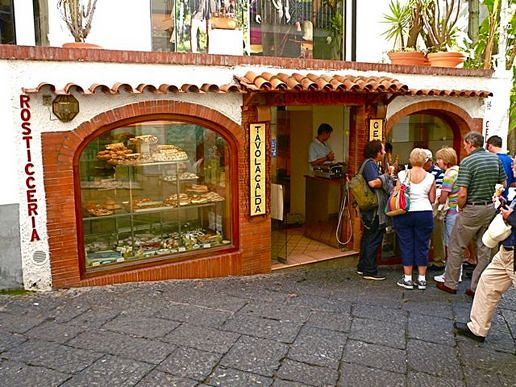 Rosticceria in Capri
Photo by Helen, available under a Creative Commons-ShareAlike licence

Rosticceria are carb-based snacks that are a Sicilian obsession.  Rosticceria (also the name of the shop) exist throughout Italy, differing between regions, but are basically always some form of "slow food takeaway" where food is precooked and ready to eat immediately.  In Naples there might be hot stuffed zucchini, in Venice creamy salted cod - but in Sicily it is all about the dough. 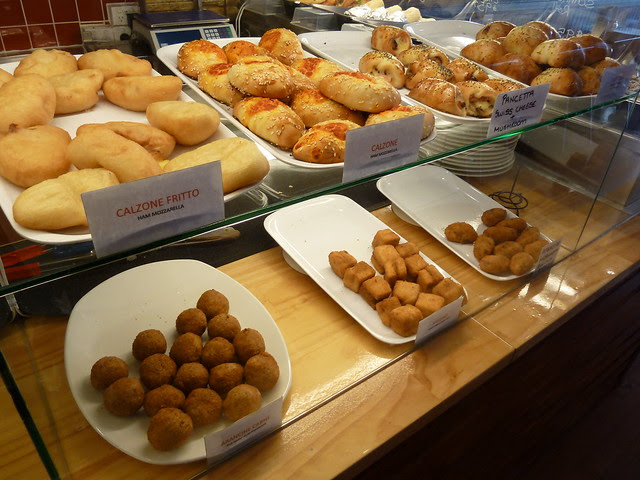 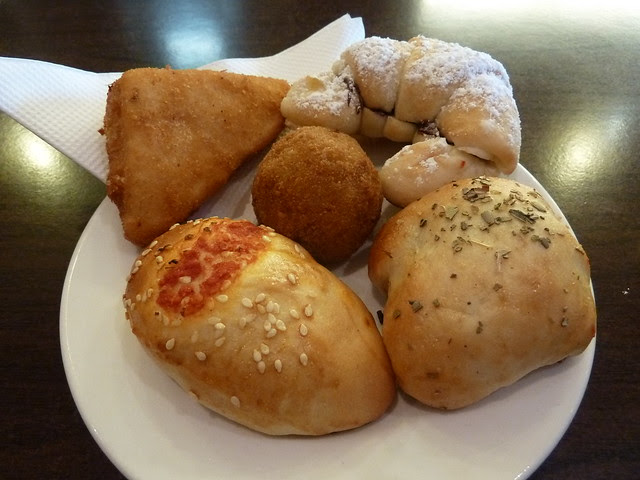 They are sold by weight ($30/kg, working out to about $1.50 each) and they are completely delicious!  In Sicily they might be eaten as a quick breakfast, or just a snack at any time of day.  At L'Angolo you can get two with a coffee for $5, or just get them to load up a plate with as many as you'd like. 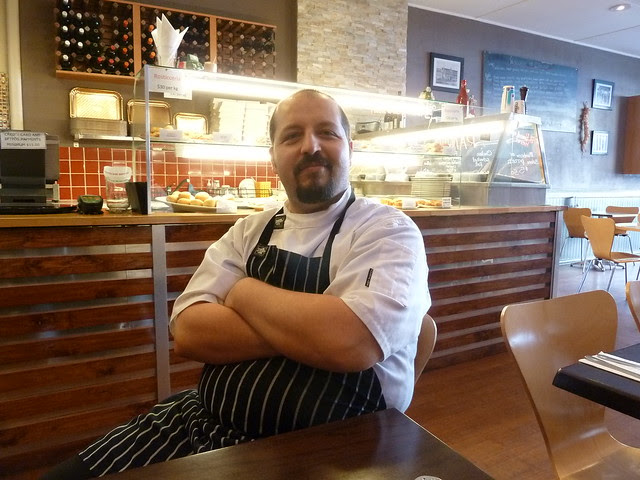 Here's Dario, the chef and owner behind L'Angolo Italiano.  His father owned a rosticceria in Palermo and he has continued the family tradition here in Melbourne.  See how rosticceria are made with "Cooking with Dario" !


I had previously written about L'Angolo Italiano for Time Out, and thought Dario's rosticceria would be perfect for this year's Mushroom Mania campaign, put on by the Australian Mushroom Growers' Association.  Dario's other passion is homemade pasta, so I got in touch to see if Dario could whip up a mushroom special for me. 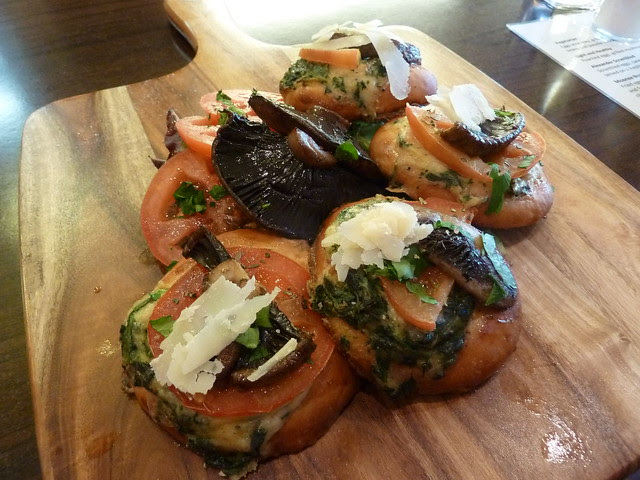 These pizzette or mini pizzas were loaded with creamy spinach, tomatoes and gorgeous, glossy field mushrooms.  Mushrooms, Parmesan cheese and tomatoes are just some of the sources of naturally-occurring glutamates, compounds that act like natural flavour enhancers. 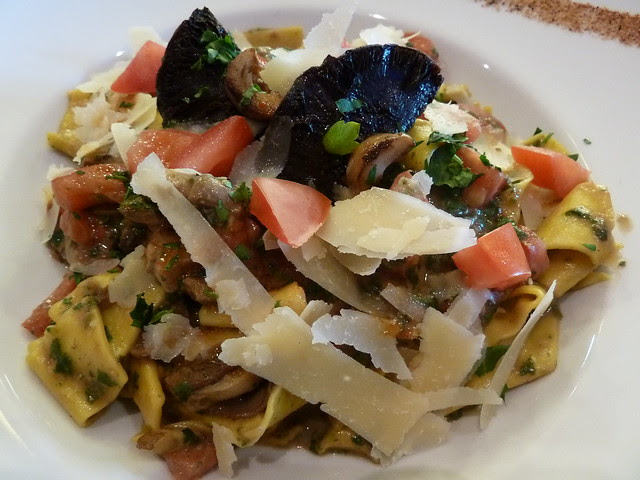 Dario is a classically-trained Italian chef (one of his past jobs was as personal chef to the Italian ambassador in Budapest) and dough really is his passion.  Hot tip:  The printed menu at L'Angolo Italiano has a lot of "cafe classics" to appeal to the locals (think carbonara or big breakfasts).  Bypass it and look to the specials board, where Dario will always have a home-made pasta on offer - think squid ink linguini or classic Sicilian pasta with sardines.  This saffron pappardelle was deliciously al dente, the pleasantly thick pieces all tangled up with sliced button mushrooms.  I love that you can now get Swiss Brown button mushies in shops now - they have a richer flavour than their mild white button cousins that I grew up on. 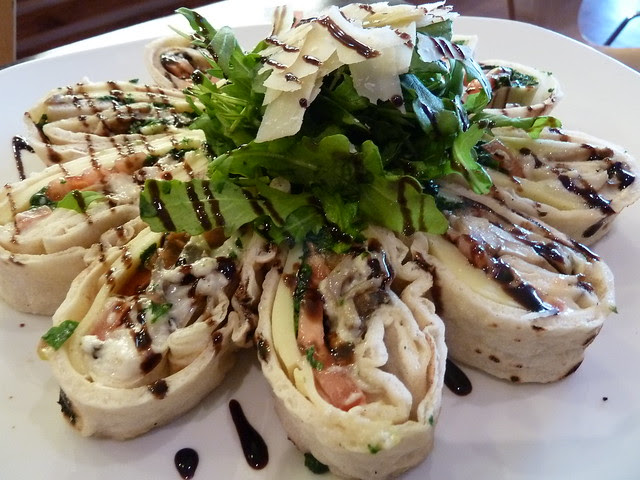 Surprise extra dish!  Dario makes the piadina (wraps, essentially) in house daily.  Apparently they are a regular bread dough cooked in a pan like chapati - totally trying this at home.  They would normally be made up ready to go in the window but he zhooshed this one up.  The filling of mushrooms, tomatoes, cheese and sauteed spinach was nice but really I just wanted to eat the soft piadina by itself, it was so good. 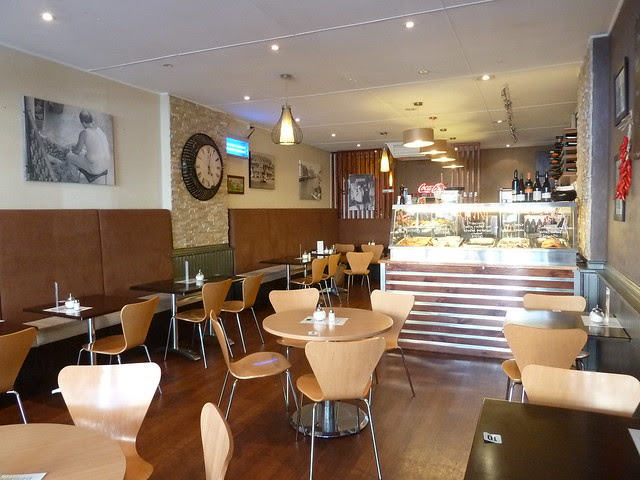 Moonee Ponds has been a tough nut to crack for Dario and Lidia.  It's tricky as they feel they have to offer "Aussie" stuff like wedges but in my opinion that dilutes the Sicilian fare that is their strength.  Anyway, make the trip and try the rosticceria - it's fantastic.  Plus, did you know the tram from Footscray goes almost to their door?

Disclosure:  This post is the first in a series of two for Australian Mushroom Growers' "Mushroom Mania" campaign.  I had free choice of any Victorian restaurant and was required to choose at least one dish in which mushrooms were the "hero" ingredient.  I am being paid a flat sum for my writing which does not include meal expenses.  Reviews could be completed anonymously or with prior notice; I had previously completed an anonymous review of L'Angolo Italiano for another publication and chose to let Dario and Lidia know I was coming in this time.  Dario wouldn't let me pay for my meal but I insisted on leaving some money!  Australian Mushroom Growers and L'Angolo Italiano have not sought nor been given any editorial control of this post.