I have been doing some reading on Vietnamese pork rolls or Banh Mi. During the French colonial period, fancy delis in Vietnam offered "French sandwiches" to the colonials. Over time, they were popularised throughout all levels of society, from the aforementioned fancy delis to mobile sandwich shops (a box on a tricycle), the peddlers (pedallers?) of which stuffed their rolls with plenty of cheaper and more Vietnamese ingredients such as herbs, pickled vegetables, cucumber and chilli. My source claims that the rolls were a status symbol, reminiscent as they were of the French. I wonder if people just realised that they tasted bloody good. 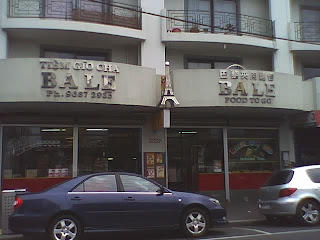 Ba Le is no exception. Today we had two rolls, a BBQ pork and a chicken & onion. The emphasis seems to be firmly on the meat rather than the salad, which was muffled by the fantastic flavours of the pork and chicken. The pork was warm, juicy, infused with hoi sin, while the chicken and onion was soy-based, lighter, very tasty. The other side of the store sells various types of cha lua/gio lua or Vietnamese pork loaf, plus sliced-to-order hams and pressed meats which you could buy to make your own banh mi at home. But really, why would you bother?

Posted by Lauren aka Ms Baklover at 5:40 PM