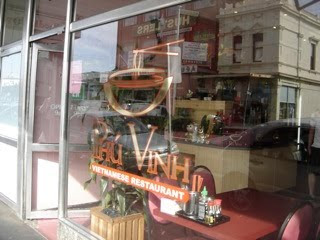 Phu Vinh is tucked under the eaves of Footscray Market, on Hopkins St.  It had never caught my eye. However, after reading rave reviews from penny aka jeroxie and Food Floozy, the sparkle on its gold noodle bowl caught my eye one market trip and we had to stop in. 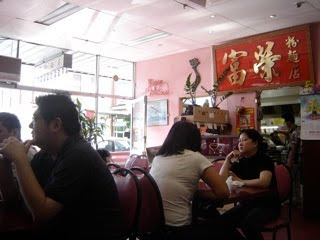 I always love it when the menu is small, maybe 12 things at most, rather than a colossus of "Chicken with Black Bean/Satay/Mongolian/Garlic", repeated ad nauseam for all manner of meats.  It makes me think that the establishment has carefully selected a few dishes which it knows it does well.  Phu Vinh has a simple menu, just 2 pages, and a few of its dishes are displayed in bright, colourful pictures on the walls.  All the signs were there for a great little find. 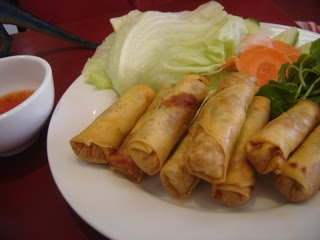 Spring rolls, $9
Some spring rolls to start.  At first glance, these did look fairly big for Vietnamese spring rolls, which are normally quite thin (and therefore, extra crispy) when compared to their Chinese counterparts.  I was quite miffed to find only four or so small leaves of iceberg lettuce, rather than the quarter-head many restaurants are generous enough to provide you with.  Only European mint was offered, but I put this aside as me being a bit of a know-it-all, so enamored am I with my latest discovery (mixed bunch of three types of mint for 80 cents!)  Shrugging, I dipped my skimpily-clad spring roll into the nuoc mam cham.
Quelle horreur!  It was sweet chilli sauce!!!  What an insult!  The spring rolls were yucky too, mealy and unflavoursome.  Phu Vinh was starting to look very tarnished. 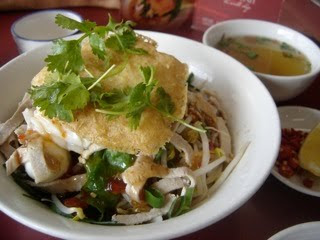 Dry rice noodle with separate soup (#4), $9
Next was this dish of rice noodles topped with shredded pork, calamari, prawn, quail's egg, vegies, and a large cracker.  A tasty chicken broth was served separately.  The rice noodles were thick, yet almost translucent, with a wonderfully toothsome texture.  They could almost have restored Phu Vinh's lustre if not for... more sweet chilli sauce!  It killed the dish for me.  However, if you are a sweet chilli fiend, you are probably thinking by now, "What's she on about?  That Phu Vinh has the Midas touch!" 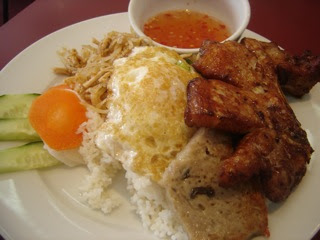 Special Broken Rice, $9
Where has com tam been my whole life?  Phu Vinh's version was not so memorable, though.  The bi (shredded pork skin) was a little too chewy.  Although the pork chop and banh trung (steamed meatloaf) were tasty, I found them overly sweet.  This did come with nuoc mam cham.  Perhaps the bottle of sweet chilli had run out. 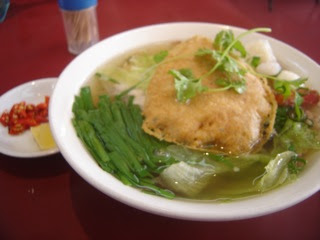 Pork and prawn soup with rice noodle (#1), $9
One sip of this clear, hot broth though, and Phu Vinh was starting to shine again.  A slurpworthy soup, filled with those same fabulous clear rice noodles, and topped with excellent cooked pork, pork mince, quail's egg, and garlic chives.  A forgettable calamari and prawn were promptly forgotten as I returned to polish the whole bowl off.  Delicious. 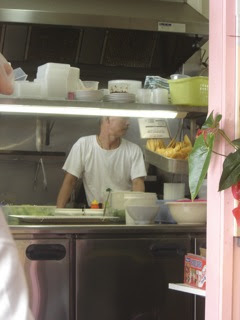 I loved watching the chef in the kitchen - he was so efficient and fastidious.  I don't mean to bag a small, family business, but the spring rolls did suck.  Some of the other dishes were just too sweet for my palate.  The noodles are delicious, though, and I've since tried their egg noodles, which are also great.  A suspicious-looking box did lead me to ask if they do indeed hand-make their noodles, as has been reported, but they told me they do not.  Perhaps they once did.  Go and try the noodle dishes, but leave #4 unless you are a sweet chilli nut.  They are out there - I once worked with a woman who would have toast with peanut butter and... sweet chilli sauce.
Phu Vinh
93 Hopkins St, Footscray (map)
Phone: 9689 8719
Hours: 9.00am - 9.00pm, 7 days