It was a perfect night for a walk, so B and I strolled leisurely through the back streets to dinner at Madhumoti. The decor is basic but sweet - little bunches of plastic flowers on the tables, and Nanna-style plates with water lilies on them. We started with the haleem, which was almost Indian chilli con carne - a slow-cooked, soupy stew of rice, wheat and lentils with chunks of meat. The grains had melded into absolute lusciousness, which was followed up by a massive kick of heat from lots of green chilli. One of my favourite things is slow-cooked cheap cuts, which maintain all the flavour that expensive cuts like fillet lack, but through a long-cooking process become tender you can shred them with a fork. The meat in the haleem was just that. This is definitely on the slow cooker to-do list for me this winter. 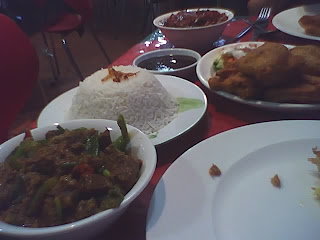 The menu is really exciting, and I am glad Madhumoti relishes in its Bangladeshi heritage, and hasn't given in to the typical, predictable Indian suburban menu of samosas, butter chicken and rogan josh. We had Beef Do-Piaja, which was a lightly-cooked dish of tender beef pieces, thinly sliced capsicum and spring onion, almost like a stir-fry. We also enjoyed Tok-Mishti Begun (sweet & sour eggplant) which was eggplant in a tomato-based sauce, seasoned with kalonji, sugar and tamarind. This was accompanied by what shall henceforth be known as the bread of pure evil - Moghlai Porota, which was bread stuffed with cheese and egg, dipped in batter and deep-fried. Eek!

The thing with Indian, Pakistani and Bangladeshi food is, there is actually no such thing in these cuisines as "curry", in terms of a catch-all phrase for a thick, sauce-based dish. The British popularised the term when they brought Indian food back to Britain, and they in turn had learned it from the Portuguese, who had colonised parts of India in the 16th century. The Portuguese at the time described 'caril' or 'carree' as 'Indian broths' made from butter, spices, nuts and other ingredients. This in term was derived from the south Indian words 'karil' or 'kari', which described spices for seasoning, as well as dishes of sautéed vegetables or meat. Basically, Indians do not lump their dishes together as 'curries', but rather speak of them in terms of the cooking methods used, or the main ingredients. For instance, a true Korma means a braised dish (not necessarily rich & creamy), Bhuna dishes are dry-fried, and Baghar or Tadka dishes feature a flavoured oil, in which garlic and whole spices have been quickly cooked, that is then stirred into the finished dish. (If you are interested in the history of curry, I recommend Lizzie Collingham's Curry: A Biography).

Bringing this back to Madhumoti, each dish had its own unique texture and flavour. This is unlike many Indian restaurants where, although the meats and sauces are different, there is a certain sameness in the textures and flavours, almost as if the same ginger/garlic/spice mix is used as the base for every dish, which then has cream, tomato or spinach added to create the required sauce. We were the last to leave and the chef and waitress were genuinely delighted that we enjoyed the food. I can't say I am hanging for the deep-fried cheesy bread again - not because it wasn't gooood, but because I can't trust myself with the doggy bag. I had eaten the rest of it before breakfast the next day! As I said, pure evil!

Posted by Lauren aka Ms Baklover at 11:52 AM