Where to start when beginning to explore the food out Footscray way?  A great place to start would be the three great soups of the west - cleansing, warming pho from Hung Vuong in Footscray; balanced yet fiery laksa from Laksa King in Flemington; and unctuous, luscious haleem from Madhumoti, also in Footscray.  B and I stumbled upon it, and I had to take Mr Baklover to try it out. 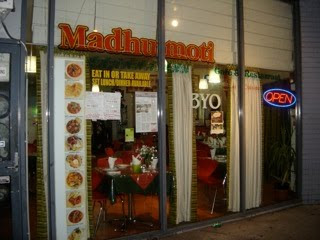 This Bangladeshi restaurant has possibly the sweetest, most heartfelt service in Melbourne.  I love the nanna-style decor with plastic flowers, clear plastic tablecloths and endearingly daggy crockery. 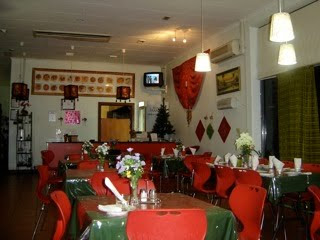 We came for one thing - the haleem.  This is a soupy Bangladeshi dish made from a blend of rice, lentils and wheat, which have collapsed into one another over hours of cooking into a thick, nutty stew.  Its creamy surface conceals pieces of meat, their fibres rendered fork-tender through hours of slow, low heat.  This bowl was fresh with zingy ginger, balanced with earthy spices, with the slow burn of green chillies.  Divine! 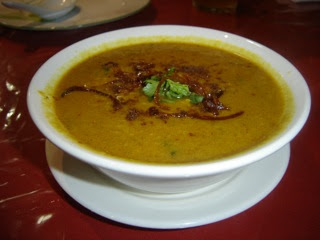 Traditional haleem, $6.50
The house specials are marked in red on the menu, so we chose the Chicken Tikka Butter Masala from among them.  The chicken was very tender, served in a creamy tomato sauce with capsicum and onion, and spiced with fresh curry leaves and - my favourite - dried fenugreek leaves.  Fenugreek as a whole spice is wonderful, with a really "classic" curry aroma, but it can become overpowering if not used judiciously.  The leaves impart the same aromatic quality but in a much gentler form. 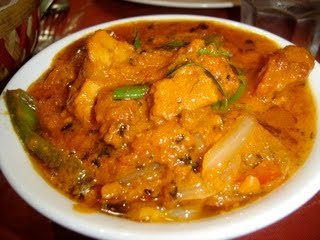 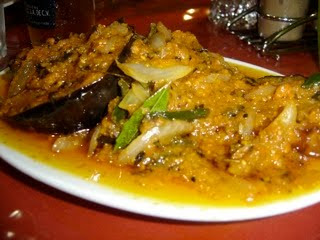 Begun Bhaji, $8.50
We eschewed rice in favour of some simple roti and some indulgent "special paratha". 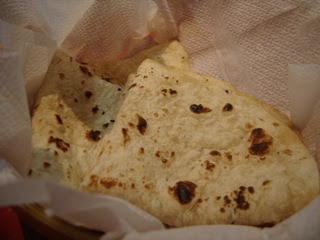 Roti, $2 each
The roti had a fantastic chewy texture, while the special paratha - crispy and flaky, due to its being rolled, spread with ghee or oil then re-rolled (somewhat like puff pastry or croissants) - was suitably indulgent. 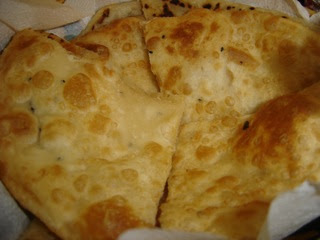 Special paratha, $3 each
However - the food, despite its careful, individual spicing and gentle cooking, was spoiled by tonnes and tonnes of oil.  The eggplant sat in a puddle of the stuff like its own little island, its fresh panch phoron flavours dissipating into the slick.  As we took spoonfuls of chicken, the hollows would be replaced by little oases of oil as shiny rivulets ran in from the sides of the bowl.  Our chins grew unpleasantly greasy and my appetite was dampened.  What a pity.
I will be back, however, if only for the haleem.
Madhumoti (map)
95 Irving St, Footscray
Phone: 9362 7583
Hours: Tues - Thurs, 5.00pm - 10.30pm, Fri 3.00pm - 10.30pm, Sat & Sun 11.30am - 10.30pm
BYO

Posted by Lauren aka Ms Baklover at 8:23 AM