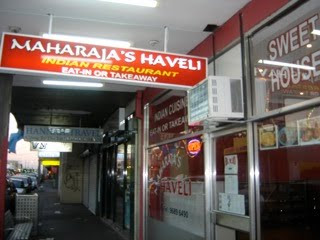 It is so exciting to see Barkly Village evolve organically.  While the Council drags its heels on its street beautification scheme, more and more of the ugly, empty shopfronts are filling up with colourful Indian restaurants, complementing the many existing Indian grocers.  The West Footscray Neighbourhood House is riffing on the theme, hosting the first of its new four-yearly markets, this one based on Holi, the Indian festival of colours.  For Vindaloo Against Violence, we decided to try one of the newcomers to Barkly Village, Maharaja's Haveli. 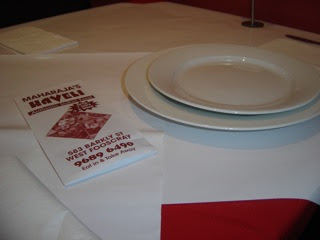 The walls were freshly painted and the menus crisp.  Despite the spartan feel, the couple who run this haveli or mansion are professionals.  You can see it in the little touches, such as the chilled glasses and the ice bucket for our beer, as well as the friendly, efficient service, complemented by their sweet kids who dutifully cleared and set every vacated table. 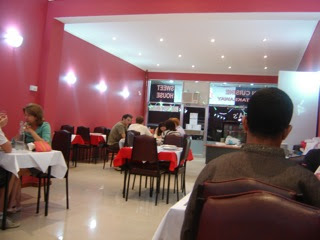 We had to try their samosa chat.  Chat are a family of dishes that are normally sold at street stalls in India - they usually include some sort of fried element such as fried crispy puffs of rice, fried bread or puri, etc, topped with any combination of onion, coriander, tamarind chutney, yoghurt, little crispy noodles and/or chat masala, a spice mix featuring tangy, umami "black salt" and sour amchoor (green mango powder). 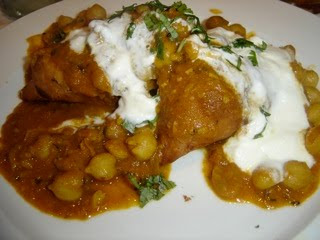 Samosa Chat ($7.00)
North Indian-style samosa chat always comes with a big dollop of chana masala or chickpea curry.  I know this is totally authentic and often really nice, but as a tamarind fiend, I did miss the lashings of tamarind chutney you sometimes get and which was absent from this version.  Still, it had a great slow chilli burn and lots of bright cumin flavours.
The stars of the show were the thalis, a kind of Indian TV dinner if you will - lots of different curries, neatly compartmentalised, with bread and/or rice and even a little pot of sweets. 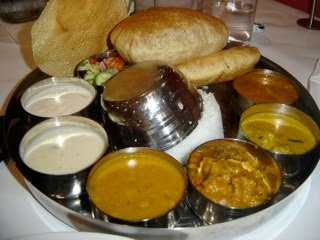 South Indian Thali ($13.90)
These thalis were very good.  I felt like a tween opening her first, pristine eyeshadow palette and not quite knowing where to start, so entrancing were all the different shades.  The South Indian thali was totally vegetarian and came with three curries (sweet, mild vegetable korma; a spicy dal, heady with asafetida and cumin; and malai kofta, cooked home-style without the excessive cheese and cream of some restaurant versions).  The obligatory soupy, South Indian sambhar featured too, infused with the tannic tang of curry leaves.  Sambhar plus puri, the deep-fried puffy breads featured above, was our regular breakfast in Bangalore. 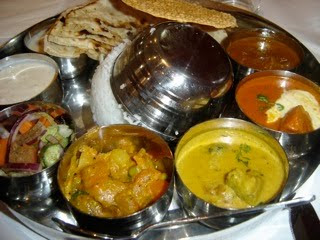 Non-Veg Thali ($16.90)
The Non-Veg Thali was Punjabi-style, with roti instead of puri, plus butter chicken and lamb rogan josh replacing the sambhar and dal.  The roti were brushed with ghee and concealed a smear of delicious pickle on the tray's base.  The stand-out dishes were the vegetable korma, mild and delicate, and the lamb rogan josh, tender and laced with cardamom that complements the meat's sweetness.  This is real Indian food - no "mild, medium or spicy?" here.  The various dishes are spiced according to tradition, in that a korma is entirely without chilli and a vindaloo is violently hot.  The kheer, a luscious rice pudding-style dessert, fragrant with cinnamon, was a delicious, refreshing end to the meal. 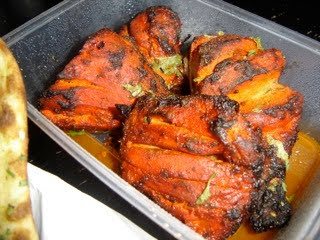 Half tandoori chicken ($8.90)
We paid the babysitter in tandoori chicken and garlic naan.  While we were eating, a few tables of the owner's compatriots were brought sizzling platters of this vibrant, red chicken on a bed of raw onion.  A taste when we got home revealed fantastic smoky flavours and juicy meat, and the complimentary mint chutney was a nice touch. 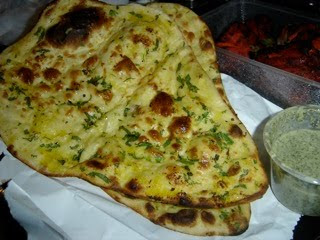 Garlic naan ($3 each)
The one thing I will say is that I may be a salt fiend, but some things were VERY salty (in particular, the dal, rogan josh and tandoori chicken) to the point that it began to spoil the enjoyment of the dish.  We just remedied this with lots of Kingfisher! 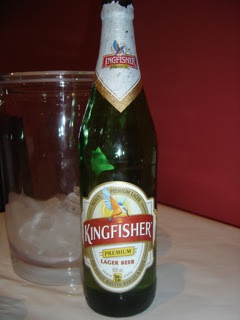 No, it's not a piccolo of beer, it's a longneck against an ice bucket.  Nothing but class for the Baklovers!  At least we weren't necking them down by the Court House Hotel.
And did we "make a difference"?  Apparently, 17,000 people dined out on Wednesday 24 May for Vindaloo Against Violence.  I'm delighted it was covered in the media here but particularly in India.  So many people who feel strongly about an issue are not going to go to a classic, placard-waving protest on the Spring Street steps, because their lives are too busy or because, frankly, that form of protest doesn't seem to make much of a difference.  The media is generally negative in its portrayal of protesters or it doesn't get picked up at all.  (Did you hear about the well-attended SACS Red Rally back in November, unless you were there?  Try searching for it on Google - diddly squat, apart from YouTube and leftie media.)  Vindaloo Against Violence was quirky enough to prick the ears of the 24-hour news cycle, and so we managed to get the message of tolerance out in a fun, positive, and not to mention delicious way!
Maharaja's Haveli, 583 Barkly St, West Footscray Map
Phone: 9689 6490
Hours: 12.00pm - 10.30pm, 7 days
BYO only - no corkage charge

Posted by Lauren aka Ms Baklover at 8:34 AM