What's your fail-safe hangover cure?  Big plate of greasy bacon & eggs?  McDonalds?  A bloody Mary?  For whatever curious reason, the only thing that can make me feel better if I've seriously over-indulged, is yum cha.

We had some American family staying with us recently and they bequeathed us a killer margarita recipe from their student days in New Orleans.  Anything concocted to deal with both frat house initiation rituals and surviving Hurricane Katrina needs to be treated with respect.  Unfortunately, I, Jules, and the long-lost Chan were somewhat reckless with it, around the fire in the backyard.  Side effects included Jules lying in our new redgum sleeper-lined raised vegie bed, imagining she was in her coffin.

Thankfully, Mr Baklover let me sleep all morning, and I atoned for my subsequent mother-guilt by taking the big girls with me to find some yum cha in Footscray.  Unlike the eastern suburbs, our "big barn" yum cha options are pretty much only Gold Leaf in Sunshine and Plume in Maribyrnong.  In my delicate state, I couldn't face the scrum that chokes the entrance to both of these (for good reason - Gold Leaf in particular is great).  I decided to try to find something local.

Our first stop was Dai Duong on the corner of Moore & Hopkins.  I peered into the gloom, through the smoky glass.  A lone table of diners looked up warily from their table in the middle of an empty dance floor, while a mirror ball spun forlornly overhead.  A sign on the door informed us that yum cha service would cease as of the following Monday.  Much as I would like to think this would have meant a grand finale - a swansong of dim sum - I suspected it would more likely mean that the trolleys would be filled with the last odds & ends of the freezer.  With pounding head and hungry girls in tow, I headed back down Hopkins St. 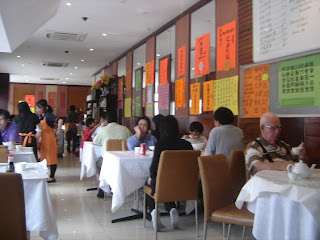 Master Restaurant beckoned - small, reassuringly busy, but plenty of spare tables.  First plate off the cart was har cheong, prawns wrapped in wide rice noodles, with a sweet soy sauce.  This is one of my favourite yum cha items - the rolls can also be filled with BBQ pork, among other things. 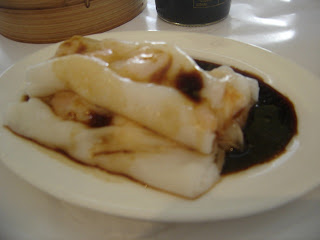 These were OK, a bit mushy - I've had better. 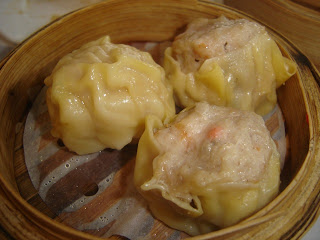 Next, everybody's favourite, siu mai.  These are pork and mushroom dumplings which, instead of being enclosed in dough, are made to look like little cupcakes, if you like, the filling peeking out of the pastry wrapper, studded with a piece of carrot or orange fish roe. 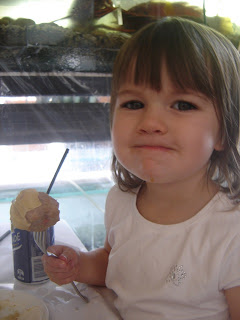 My little dumpling!
By this stage, I had had a whole pot of jasmine tea and was starting to feel much better. 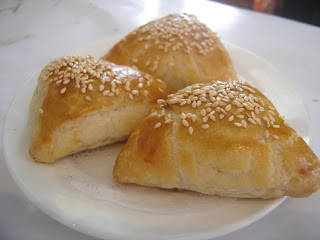 We called for chao shao su, sweet BBQ pork in excellent, flaky pastry (I suspect made with lard).  Delicious! 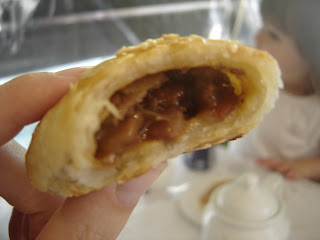 Next, har gow, prawn dumplings encased in delicate rice flour wrappers.  These are one of the hardest yum cha dishes to get right, in my opinion.  So many times you lift the dumpling, only to have its pearlescent exterior tear off and remain stuck to the bamboo steamer - a flabby, gelatinous reminder of what could have been so light and delicate, complementing the juicy prawn filling inside. 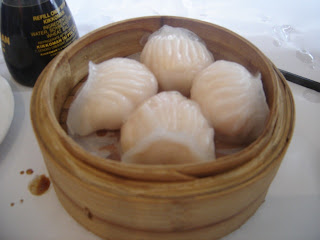 Thankfully, these did not stick to one another or to the basket, and were very good. 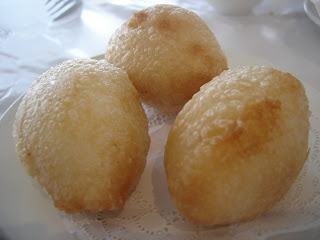 A special order was put in for ham sui gok.  These are footballs of sweet dough, deep fried; their sweet, crispy exterior bitten into to reveal a savoury minced pork filling.  These were excellent! 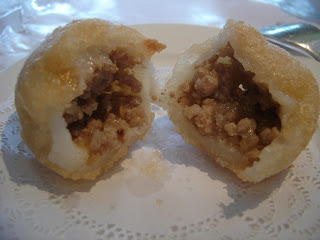 Was it the best yum cha I've ever had?  Not the best, but it really hit the spot.  If you can't face the trek and wait out at Gold Leaf or Plume, do check Master Restaurant out - I think you'll be pleasantly surprised. 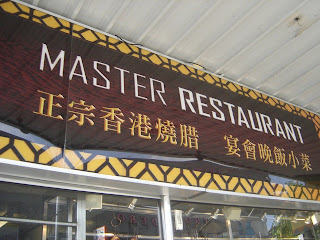 We returned home and I felt like a million dollars... for about an hour.  By the afternoon, Mr Baklover and I were in a terrible state that no amount of black aspirin (Coke) could remedy.  The marvellous Bianca and Den came to our rescue, firing up the barbie, and I can subsequently and happily report that when you're in need of a hangover cure, chili kolbasi from Michael's Deli will really cure what ails you.

Posted by Lauren aka Ms Baklover at 8:22 AM