Maddern Square.  High noon.  The battle of the banh mi is about to take place.  In the red corner, we have Nhu Lan, the people's favourite.  Look at him, resplendent in an orange and white cape and leotard!  The crowd goes wild as he flexes his sticky chicken thighs.  His buns are so crispy!  A hush descends over the crowd - the challenger has arrived.  Ba Le is a fearsome opponent, his chest emblazoned with a silver Eiffel Tower.  Will Nhu Lan be pounded into pâté?  Will barrel-chested Ba Le be brought down by Nhu Lan's bi?  Or will this epic battle degenerate into a salad smackdown? 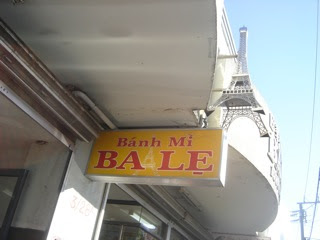 Nhu Lan is arguably the most popular of Footscray's Vietnamese bakeries.  However, Ba Le, tucked up Leeds St, has its loyal and devoted fans.  Like many Footscray shops, it has a split identity.  One third sells different types of Vietnamese ham, the middle portion sells banh mi, and the last section sells bubble tea.  This is a common theme in Footscray.  Take the shop in Barkly St that does money transfers and photos, or the other one that does DVDs and bubble tea.  So what, you say - maybe you want to send your rellies a family photo as well as some cash?  Or grab a taro milk tea while you browse the latest releases?  Well, what say you about the place on Paisley that sells orchids along with bongs? 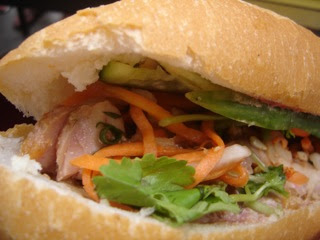 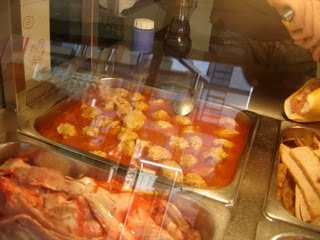 Next, I wanted to try xiu mai.  As Phil of The Last Appetite points out, xiu mai is a sort of Vietnamese interpretation of the Cantonese yum cha favourite, siu mai, in that they are pork dumplings but sans wrapper.  Unfortunately, banh mi xiu mai got a massive FAIL from this fan.  I expected a bouncy texture, like that of siu mai dumplings, but what I got was mincemeat - a banh mi burger.  I am sure this is authentic, but not at all what I felt like. 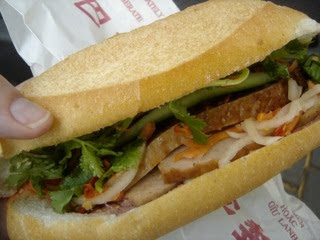 Lastly (no, I did not eat all of these on the same day!!!) what was described as "roast pork" - I thought it was the cha lua (Vietnamese ham or bologna) that the other side of the shop sells, but the server said that it was not.  At any rate, this banh mi was filled with rectangles of a sweet, springy, tasty pork loaf - somewhat like chao tom or "sugarcane prawns", the light, chewy prawn paste molded on sugarcane and then grilled.

The battle is being waged...  Both opponents charge, fists outstretched for a power pâté punch.  Ba Le reels from Nhu Lan's superior strength.  Ba Le recovers and executes a meaty manoeuvre, but Nhu Lan parries his blow.  Ba Le is stunned and fails to avoid Nhu Lan's simple yet killer move, the "cucumber screwdriver".  The match is over!  Nhu Lan reigns supreme!

Ahem... sorry, I got a bit carried away there.  In translation, I really think Ba Le is more about the meat than the salad.  Their rolls are much meatier, which is not to say that Nhu Lan's are not - rather, Nhu Lan's salad is much better.  It is crispier and more flavoursome.  I also am not a fan of Ba Le's pâté; it is an odd pink colour and has a particular taste I am not keen on.  Nevertheless, Ba Le's rolls are a bargain at $3, and I believe you can have any combination of meats for the same price.  One time I was in there, a man was getting a sandwich with a little bit of each filling - a Meatlover's banh mi, if you will.  Now there's a lunch I would be happy to wrestle with.

Posted by Lauren aka Ms Baklover at 8:12 AM