Places and times of transition are imbued with a sense of trepidation and magic.  In literature, misty marshes and bogs often provide the setting for mysterious events, betwixt as they are between land and water.  The blurry light of dusk and dawn are portentous times where possibilities abound.  Clear-cut notions are safe and reassuring, like primary colours.  Meanwhile, a haze of ambiguity hovers around the margins of times, places, and ideas.  Some find this uncertainty ominous and unsettling, while others find it electrifying.

So much of what we eat is neatly packaged, both literally and metaphorically.  The divorce of plastic-wrapped supermarket food from its natural farmyard or forest state has been oft written about.  Many people also expect, even subconsciously, that food stay within certain parameters.  For example, carrots should be orange; tomatoes, red; and bananas curved, not straight.  Eggs should have brown shells, and any speck of blood within should be fastidiously picked out.

Balut, or fertilised duck eggs, are a "transition" food.  They contain a semi-formed duckling nestled within the yolk.  Neither egg in the Western sense, nor entirely duck.  Billy (cloudcontrol) had enticed me to a recent Melbourne food blogger meetup with the prospect of homemade bo kho and just casually dropped in that we would be having a balut starter.  Also known as hot vit lon in Vietnam, these eggs are enjoyed across Asia, but particularly in the Philippines as a snack after a night of drinking.  A sense of foreboding came over me as I gave in and googled "balut" late one night.  When does an egg become a duck?  At what point does eating an egg become eating meat?  Could I really eat such a thing - feathers, beak, gizzards, and all? 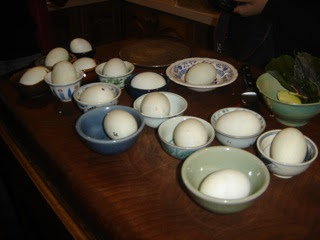 Eggs were purveyed from three corners of Melbourne - Springvale, Footscray, and Richmond.  Buyers were advised to find "middle stage" eggs.  I have seen these large white eggs before in Asian grocers, neatly stacked in trays and stamped with a red Chinese character, but had no idea what was lurking inside, curled and dormant.  Each egg was marked with an S, F, or R to denote its origin, and they were boiled for around 15 minutes.

About fifteen pairs of eyes - some dancing with curiosity, some wide with anticipation, some squeezed half-shut in terror - watched Billy as he brought a silver spoon down on the hollow end of an egg.  A veined membrane was revealed, and he sprinkled it with salt and pepper   Delicately he dipped his spoon in, brought out a creamy, quivering morsel, ate, and declared it good.  The spell was broken.  Round the table, bloggers and their friends tucked in, and the overwhelming mood was one of surprise, that fertilised duck eggs were actually yummy. 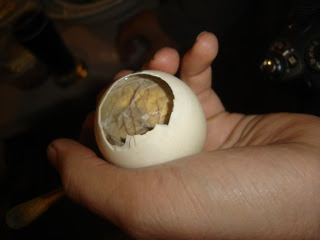 Moi?  Well, on preparing for this event, I talked to my dad, who has eaten balut (along with duck tongues, chicken's feet - I could go on).  He advised me it was just like a hard-boiled egg.  Phew, I thought - until I remembered the only three things in the world I cannot abide are offal, blue cheese, and hard-boiled eggs.  Their farty aroma and rubbery texture makes me retch.  I did have to walk away from the balut feast a few times and take a few gulps of fresh air.  But I did try some, and was amazed to find I liked it.  The yolk is extra creamy - perhaps being fertilised, it has kicked into being a placenta-like powerhouse of nutrients.  But the best was the broth that came off the top of the inner membrane.  Like the most piquant, balanced fish sauce, it was a revelation and absolutely divine.  I challenge anyone to try a spoonful and not agree.

Anh of A Food Lover's Journey, who is originally from Vietnam, talked about how, growing up, "egg" meant balut.  There was an awareness of the life cycle of the chicken or duck.  We have lost that in the West, at least among most city-dwellers.  In many situations where roosters and hens are not kept artificially separated, I imagine that it would be accepted that an egg gathered from the garden may be at any stage from unfertilised to ready-to-hatch.  I respect so much those food traditions that embrace the natural life cycle and habits of a bird, and see balut as a delicious bonus to an otherwise everyday food - the egg. 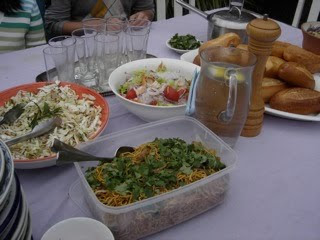 Fabulous things happen when foodies get invited to a pot luck.  Warming bo kho, fabulous fried noodles, crisp Vietnamese coleslaw, tangy Thai salad, and a luscious coconut, banana, and tapioca dessert.  (My canh recipe here.)  It was a perfect autumnal afternoon, and we whiled away the afternoon in Tammi's cosy backyard, in the glow of a warm fire and to the sounds of chickens gently clucking. 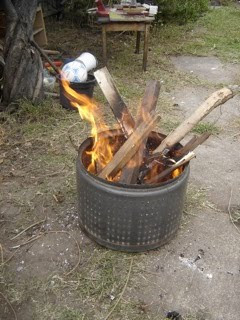 As I drank my wine and chatted with friends, both new and old (hi Daniela!), something was simmering within me.  In the balut battle between Footscray, Richmond and Springvale, Footscray got fried!  Our eggs sucked - they were old and had no tasty broth.  Our pride was poached!  Our coddled cred was crushed!  I vow to avenge my fair suburb in the upcoming blind banh mi battle.  Stay tuned!

Read about #balutfest at Celeste's Berry Travels.  I'll add more links if and when people post about the event :)

Posted by Lauren aka Ms Baklover at 8:29 AM