On the great wagon trail of life, it's easy to get stuck in a rut.  With Vietnamese food, I have a real tendency to get stuck on certain dishes.  For an inordinately long time, I couldn't eat anything but sliced beef pho.  My affection for these seemingly bottomless bowls of broth seemed similarly limitless.  Later I became obsessed with sugarcane prawns or beef & lemongrass rice vermicelli salads.  Like a fly trapped in honey, being in love with a particular dish is a delicious problem to have.  Every so often, though, you have to wrench yourself away from your comfy surroundings and go in search of new territory. 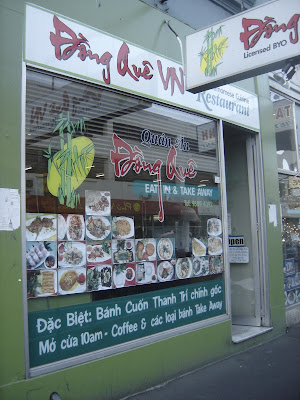 Dong Que is a great little restaurant where I am sure that even the most seasoned Vietnamese food conoisseurs would find something to surprise them.  The walls are covered in enticing pictures of its specialties.  The dishes here have a northern Vietnamese bent, with its offerings of grilled fish with dill (cha ca thang long), steamed rice paper (banh cuon), and snail soup (bun oc). 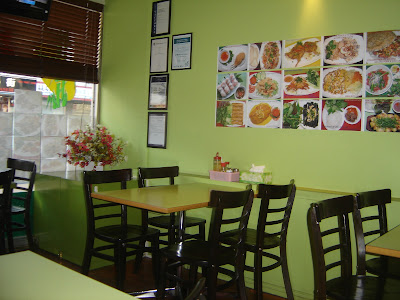 Southern Vietnamese food is known for its lush use of herbs and other greenery, and it is this subset of Vietnamese cuisine that dominates the Vietnamese restaurants here in Australia.  In southern Vietnam, lime and tamarind are used to add a sour flavour, and coconut milk is used for sweet and mild curries.  Northern Vietnamese food is said to be somewhat plainer and more reminiscent of its Chinese heritage.  Soy sauce is used as freely as fish sauce, vinegar may be used to add sourness, while black pepper can add heat rather than chillies.  Long, slow cooking is used to draw out flavour - indeed, pho has its origins in northern Vietnam and did not become popular in the South until the 1950s. 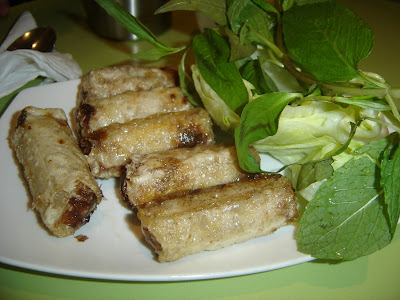 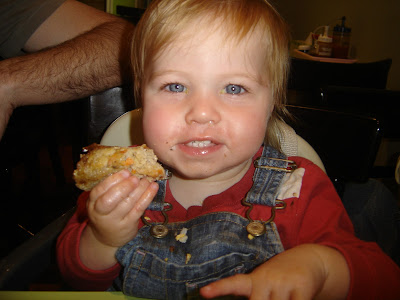 Dong Que's authentic rice paper spring rolls were a lot fatter than ordinary cha gio.  While I find that many cha gio have quite indistinct fillings (it's impossible to tell the difference between the prawn, pork, or prawn and pork), the stubbiness of these specimens meant the quality of the filling was unmissable.  It was the classic blend of minced pork, black fungus, and bean thread noodles, and was very tasty.  The rice paper skin is pleasantly bubbly, but after wrapping in mint and lettuce and dipping in nuoc mam cham (seasoned fish sauce), I think their fatness did let them down somewhat as there wasn't enough crispy crunch.  The ultra-crispy, wheat-wrapped, cigarette-shaped cha gio is better for serious lettuce and dipping action. 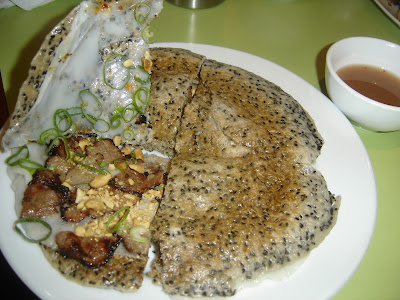 ﻿Banh dap thit nuong (Steamed rice paper with grilled pork and rice cracker), $10
Well, our desire for crunch was well-fulfilled with this fabulous "Vietnamese taco".  Banh cuon or a very similar round rice noodle is topped with smoky grilled pork, peanuts, and spring onion, and sandwiched between seriously crunchy, thick, black sesame rice crackers.  This is served with mam nem, which is related to that most odiously odorous of dipping sauces, the fermented prawn mam tom.  Mam nem is not nearly as strong, tasting like a thicker, richer nuoc mam cham. 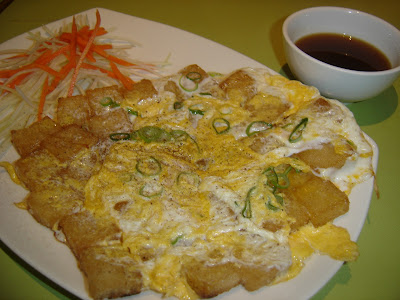 Banh bot chien (Fried mixed flour cake with egg), $9
I first had this on Mei Ling's "Taste of Vietnam" tour, and it was the reason I wanted to go back to Dong Que.  It is so, so yummy - squares of rice flour cake (made very simply by steaming rice flour and water), fried, then bound with lightly beaten egg.  It's served with a sweetened, light soy sauce.  Fantastic, and the kids loved it.  I did realise later than this is just a simple snack, often eaten after school.  Yep, we were the weird Anglos sighing and moaning over the equivalent of a teenager's two-minute noodles!! 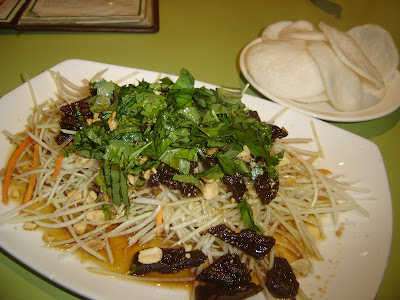 Goi du du bo kho (Dried beef with shredded green papaya coleslaw), $12﻿
This coleslaw was absolutely divine!  Crunchy green papaya, perfectly shredded, mixed with lightly pickled carrot, crunchy roasted peanuts, and topped with beef jerky.  I'm not sure how the jerky was prepared, but it was chewy, rich, and tasty, yet somewhat tenderised by the tangy, light, soy-based dressing.  The prawn crackers are there for piling with salad then eating, somewhat like a Mexican tostada.
I'm curious to try more northern Vietnamese dishes here, particularly to see how their pho differs from say, Hung Vuong Saigon's.  I spied a couple eating bo la lot or beef in betel leaves, which came with rice paper sheets which they dipped in water to soften, before rolling their own DIY rice paper rolls.  They also had a seafood/vegie stirfry on crispy noodles, which they dressed with Chinese black vinegar.  Intriguing!

My only criticism is being forced to watch the racist, consumerist, keep-fear-alive shit that is Channel 7's Today Tonight, and also for my kids to have to be forced to watch it too (they have two huge TVs, one at the front and one at the back of the restaurant).  Now that way of looking at the world is a rut I never want to get into, let alone get stuck in.