I've been searching for Matt Preston's "divine brand" for some time now, and Plume is the next feather in my cap.  My sister and I, raised on Sunday lunches of BBQ pork buns, siu mai, and endless glasses of lemonade, went there on Father's Day for a virtual cheers to our dad, who was overseas at the time. 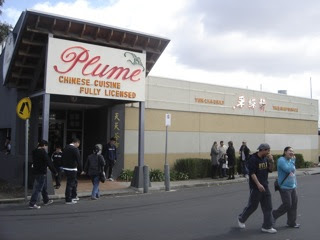 Plume is next to Knifepoint Shopping Centre, which is manic on weekends.  My tip is to park on the upper deck of the carpark opposite and just walk down the stairs nearest the restaurant. 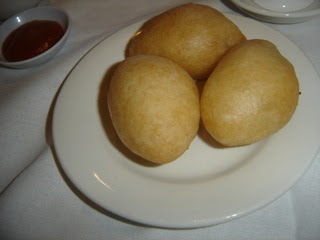 Ham sui gok
These ham sui gok were honestly the best both my sister and I have ever eaten.  These are nicknamed "footballs," and some specimens can be equally as leaden.  Not these - with just the slightest bite, the crispy shell gave way to meltingly soft glutinous rice dough, revealing a warm cavern of delicate pork mince.  WOW! 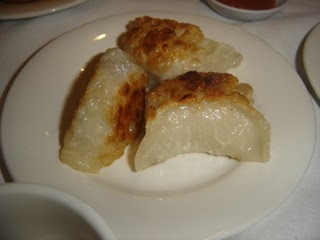 Jiao zi
These panfried dumplings, cousin of Japanese gyoza, were equally excellent.  Sometimes dumplings at yum cha may look different but they all taste of the same filling.  Not here - the cabbage in the filling was very pronounced, and it was finely minced.  Delectable! 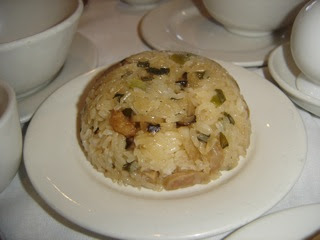 Sticky rice
The sticky rice comes in a clear bowl that is upended.  It is studded with jewels like Chinese sausage and mushroom, and the rice has a "bite" rather than being too soft.  This was very nice. 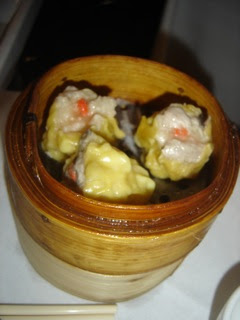 Siu mai
The yum cha classic - a vaguely cylindrical morsel of pork and prawn mixture, tucked into delicate yellow pastry.  These were juicy, porky, really yummy.  One of mine had a whole prawn in it!  Whether this was intentional or not, I don't know. 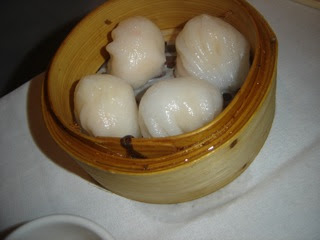 Har gow
These were filled with big chunks of prawn and shredded ginger.  The skin was thicker than most other har gow I have eaten, but the flavour was excellent. 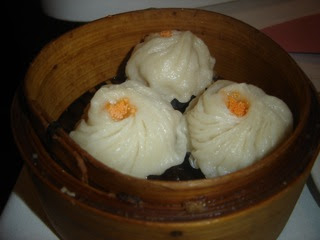 Shanghai dumplings
Every yum cha place tries to do these xiao long bao, the famous, soup-filled dumplings, and none of them get it right.  Here at Plume, they came in a little cupcake cup, I assume to stop the soup leaking out the bottoms if they stuck to their steamer or each other.  However, it was impossible to get them out of the cups without the pastry breaking, and there was only a dribble of soup in each one.  Leave these up to the experts, please! 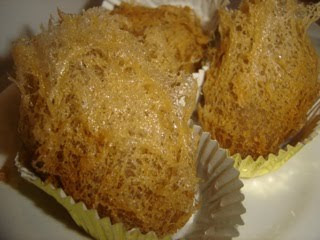 Wu gok
These are the same as ham sui gok, but instead of a glutinous rice dough, it's mashed taro.  You may have seen this vegetable at Little Saigon Market or your local Asian grocer. They look a bit like a deformed coconut, brown, woody, and hairy, and when sliced their flesh is white, shot through with brown squiggles.  This one was for you, Billy!  I am not a fan though, sadly.  Maybe it was bad wu but it was grainy and mushy.  These went to the baby in the highchair (who has thankfully moved on from prawn toast). 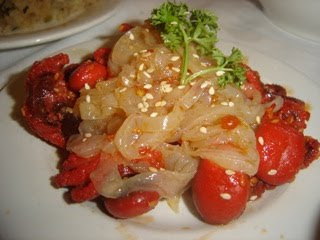 Baby octopus and jellyfish
And this one was for you, Dad!  We couldn't go the duck tongues, but these baby octopus were great.  They were chilled and dressed with sesame and a little chilli.  This was good jellyfish, too - kind of half crunchy, half chewy, a little like al dente rice noodles perhaps.  The taste is similarly "nothing" - just a carrier for the dressing. 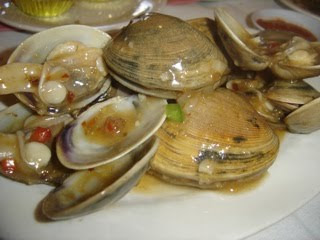 Pipis, $17
I got overexcited and ordered these pipis.  FAIL.  Many were barely opened and they were dressed in a gloppy sauce which belonged in a bain marie in the food court next door, not coating expensive seafood. 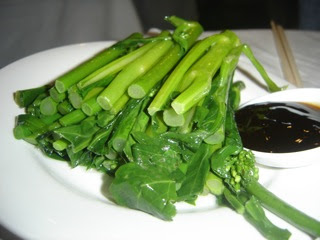 Chinese broccoli with oyster sauce
Looks yummy, right?  WRONG - the stems were so woody, I had to revert to childhood and spit it out in my napkin.  Sorry if TMI! 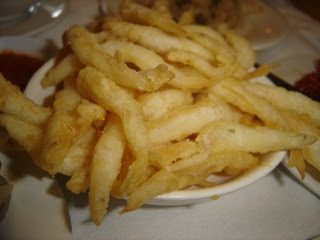 Whitebait
These tiny fish are lightly battered, fried, and eaten whole.  See the tiny black eye in the fish looking to the right?  The kids loved these - "Mum, did the fish turn into chips?" 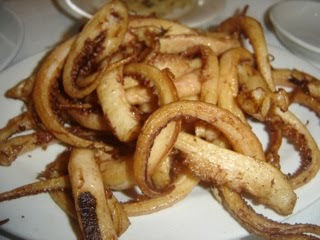 Squid
A tentacular tangle of deliciousness!  I love the contrast of frizzled suckers and juicy, fat legs. 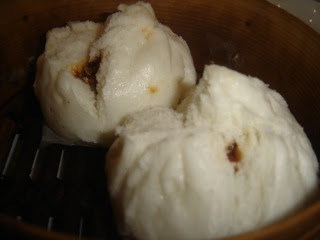 Char siu bao
Plume had soared, floundered, and now returned to dizzying heights with a fabulous grand finale.  These BBQ pork buns were absolutely amazing.  The dough was so fluffy and tender, concealing juicy, fragrant BBQ pork slices within.  These always come in sets of 2, and as kids, there would always be a fight over who got the last one (I am one of 3 siblings).  Despite my protests that I could not eat any more, a sisterly squabble ensued over these, just like old times. 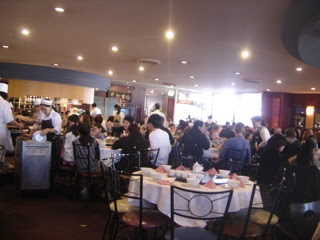 Plume is notoriously expensive, but is it worth the extra dough?  The dumplings and the bao were really, really good, but when you front up to pay, it stings a bit.  If you eat yum cha regularly like I do, it stings too much to make it my regular haunt.  I would recommend it for a special occasion.  For everyday, I like Gold Leaf Docklands or Sunshine for the balance of price and quality, plus Sunshine has the chandelier X factor.  A bit of glam on a Sunday morning never goes astray!