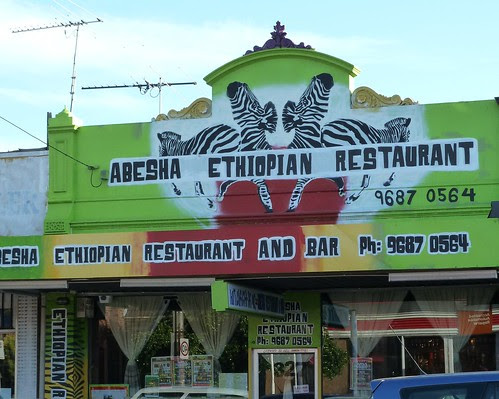 "you know the food's going to be good when the outside of the building is painted like a rasta zebra", says mobile reviewer Shain Singh of Abesha on Urbanspoon.  Following this logic we chose Abesha as the venue for the inaugural Westside Food Bloggers' Meetup last December. 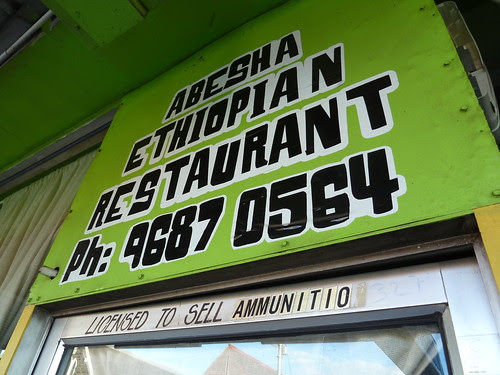 The gun shop next door used to be on Abesha's current premises and the old sticker still makes me laugh.  Footscray does have its fair share of odd combination businesses but injera and bullets would take the cake! 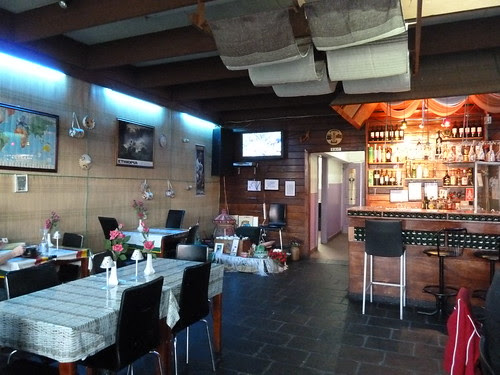 It's cool inside with a slate floor and the traditional Ethiopian coffee ceremony corner that so many restaurants share.  Above Ethiopian music videos play.  I love the particular beat that their music has and the videos are so joyous. 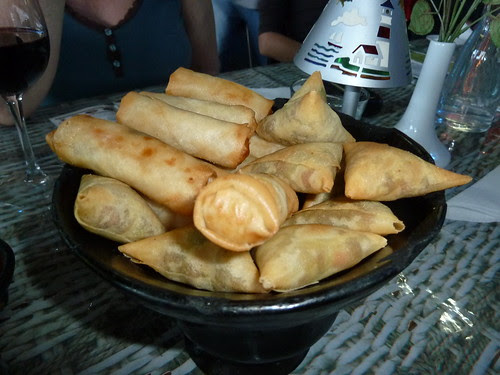 We left it up to the good folks at Abesha to bring us their choice of dishes.  I tried to get all the names but we were all having too much of a nice time to stress too much, so here is a small selection, the names of which I am confident.  Above are a mixed plate of sambusa which are pastry-wrapped goodies resembling samosas.  I had a curried vegie one that was quite nice. 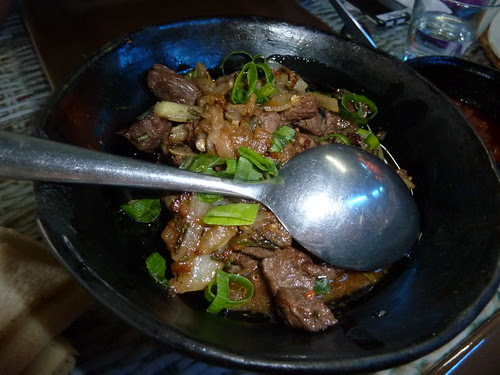 Lega tibs
Tibs generally means that the meat is in chunks and the preparation will be dry, like a stir-fry, rather than a stew.  I thought this was great, although others were so-so.  The meat was neither tough nor overly tender, cooked in butter with onion.  I do like African Town's tibs the best though, particularly as they have lots of fresh green chilli. 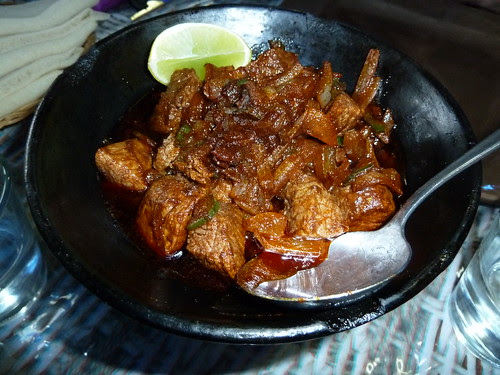 Gored gored
This was delicious.  Chunks of beef cooked in a similar fashion to the tibs, in butter with onion but with the addition of berbere, Ethiopia's national spice blend. 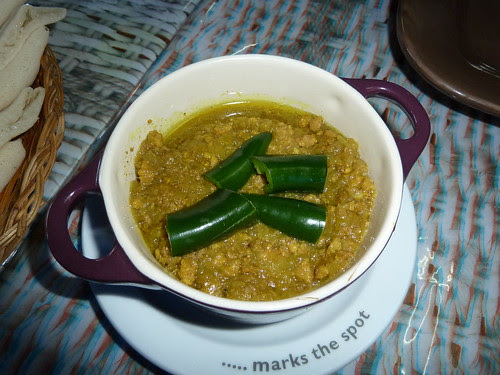 Aletcha wat
Wat in a dish description will mean it is a "wet" curry or stew whereas aletcha or alicha dishes will mean there is no berbere or hot spice, that it will be mild with the use of turmeric, ginger and garlic.﻿  This was a minced meat dish that was very mild and very delicious. 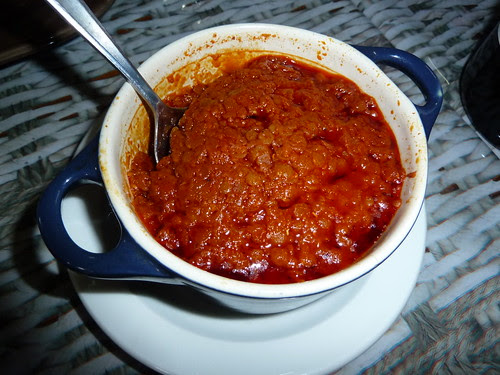 Yemisir wat
This is a stew of red lentils similar to the aletcha wat, the above minced meat dish, but here cooked with tender lentils and berbere hot red spice.  The ginger was particularly prominent here and the lentils were very well cooked, not at all mushy and still retaining their shape. 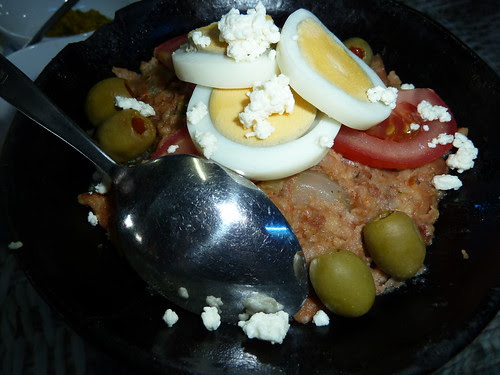 Ful
This is a mashed fava or broad bean dish which is common across much of the Middle East and East Africa.  It is even seen in Syria and Lebanon where the broad beans are left whole and drizzled with yoghurt and olive oil (recipe from a friend coming soon).  Others on the table enjoyed this version but I found it too plain, being more used to having the beans spiced and dressed with more cheese and oil.  Other good versions in Footscray can be found at African Cottage and Khartoum Centre Restaurant. 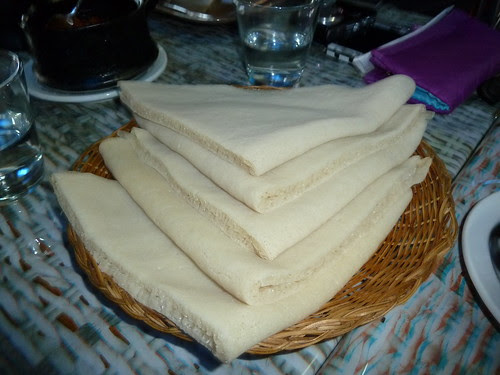 Injera
Ah, the best reason for eating Ethiopian food!  Sometimes I want to lie back and put this over my eyes a la cucumbers.  It is so soft, cool and delicious.  I put small dollops of each dish on my plate and used small pieces to pinch up morsels of each dish.  Mister did comment that the taste of each dish was quite different when not eaten with injera, as injera has quite a pronounced sour flavour, similar to sourdough bread, unlike something neutral like rice. 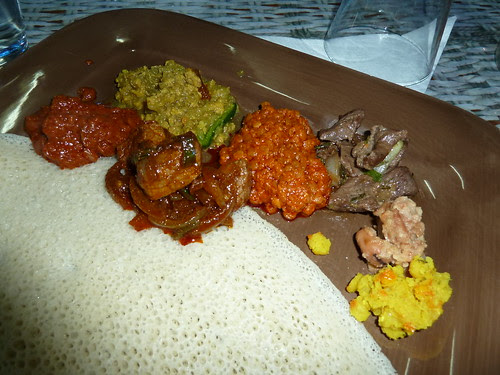 The service was lovely and beers were cheap at just $5, although beware the $8 corkage.  I did find the food somewhat oily, which I am sure is authentic - in many countries around the world, cooking oil is the main source of calories.  The portion sizes did seem smaller compared to other local Ethiopian options but it was hard to judge in a large group meal situation.  Nevertheless, I really enjoyed the food, and the company too!