Mock meat.  If you're a meat-eater, what's the point?  It seems obvious, but consider - why walk when you can drive?  Why grow vegetables when you can buy them from the shop?  Because sometimes the less obvious option, that might initially seem like a mere conceit, is actually pleasurable in itself. The White Lotus is a real Melbourne fixture.  It is a genuine family-run business and all the mock meats are made on the premises.  There is a strong tradition of vegetarianism in Buddhism, and Buddhist cuisine has evolved as a unique entity, focusing on creating mock meats out of "beans, taro, yam, gluten and flour by [the] chef Shirley Lee", to quote their menu. 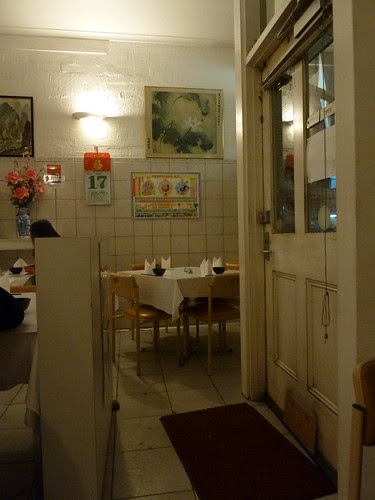 So old school, I love it.  Napkins in little hats, red lanterns, plastic flowers - almost the vision of a suburban Chinese restaurant.  But instead of those restaurant's relative opulence, with dark carpet and fake gold trim, The White Lotus' white tiled walls give it a slight air of austerity. 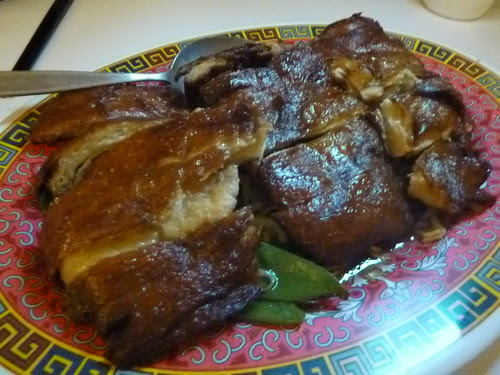 
The mock duck is anything but austere, however.  I lifted a piece suspiciously to my mouth and felt my eyebrows rise in unison with those of my dining companions.  It was really, really good!  The "skin" was crispy and underneath had a layer of tasty "fat", just like real duck skin.  The "meat" was juicy and rich - the main differentiating factor was that it lacked the grain that real meat has.  But the taste!  It actually tasted like duck but with no off-putting greasiness.  I have no idea how they did it.  The sauce was light, soy-based and the duck came on snow peas and bean sprouts.  Divine!  When we went to pay, we saw a family of four, three of whom all had their own individual plates of duck.  It was that good. 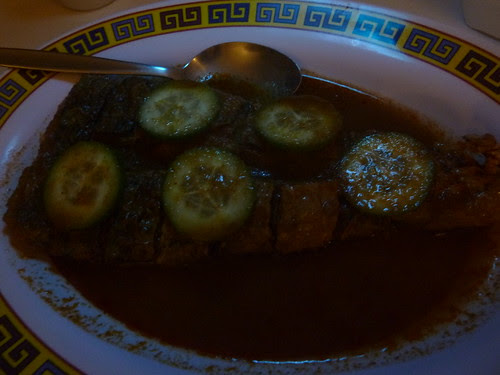 
This tamarind fish won Cheap Eats' vegetarian dish of the year back in 2007.  It is really incredible.  Apparently the gluten is layered somehow to produce a very delicate, almost flaky texture, just like real fish.  The crispy skin is made from a layer of beancurd over a layer of nori seaweed to give the scent of the sea.  The sauce was fabulous of itself - very much like Assam sauce apparently, based on sour tamarind but mellowed with a little sweetness and perhaps tomato. 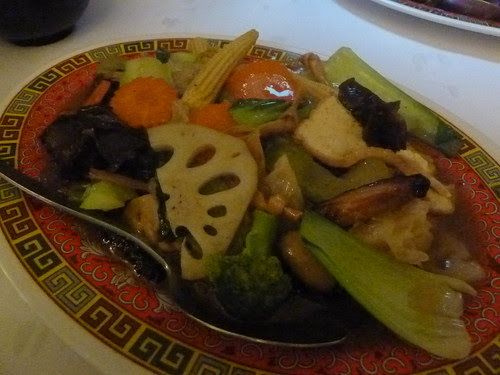 White Lotus Special Vegetable Combination, $16
These vegies were okay - the White Lotus uses no garlic, onion or anything else from the allium family and I noticed the lack of garlic in this dish.  I also doubt they use MSG.  Nevertheless this worked as a palate cleanser for the other two much stronger-flavoured dishes.  It included interesting Chinese ingredients such as lotus buds, white fungus, black fungus and lotus root.  The black fungus is often found in spring rolls - look for the little black strips 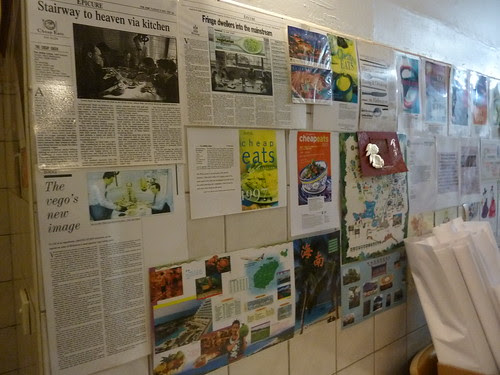 I really respect vegetarians.  For me, meat is something of a carnal pleasure - I can't resist that charred, fatty, rounded mouth feel it has.  I get really annoyed when Anthony Bourdain or other chefs bag vegetarians because to me it is a beautiful philosophy and something, try as I might, I don't know if I have the strength to maintain.  In both Hindu and Buddhist cultures there are traditions of on-off vegetarianism which people may take up as a spiritual exercise.  I like that idea.

Meanwhile, if you do eat meat, why bother going to White Lotus?  Because the bottom line is, it tastes awesome.

P.S.  Vegetarians and vegans, did you know there is a vegetarian yum cha place in Box Hill??