UPDATE:  This restaurant is now closed and as of August 2012, most shops in Westville Central 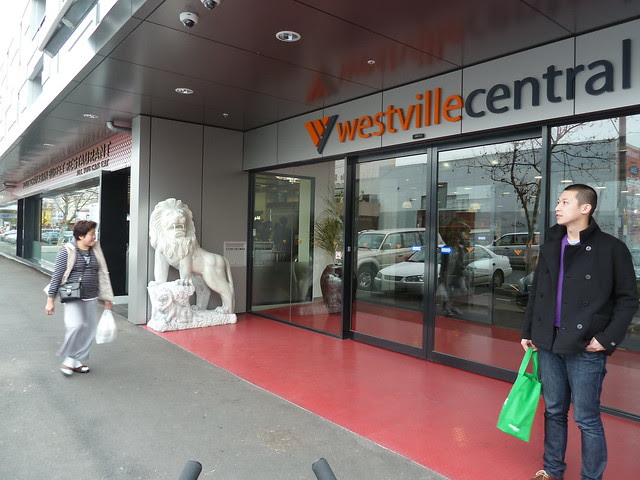 The Westville Central apartment and shopping complex has recently opened up the top of Nicholson Street, giving us lots of new nooks and crannies to investigate.  Its flagship store seems to be the expansive (and expensive) Footscray Asian Buffet Restaurant, which in its short lifespan seems to have dramatically plummeting prices as the weeks have gone by.  I think it is dear because they have all-you-can-eat seafood but if you don't really want to do nothing but pig out on prawns, the price has made it kind of off limits.  They are down to $17.99 for an adult for a weekday lunch, though, so maybe it's worth trying. 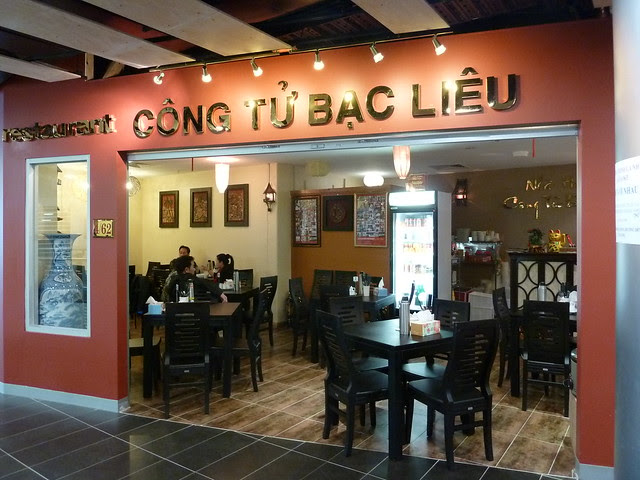 Nha Hang Cong Tu Bac Lieu (or, "the long name place") is a dear little restaurant tucked away inside offering a Southern Vietnamese-influenced menu that punches above its weight. 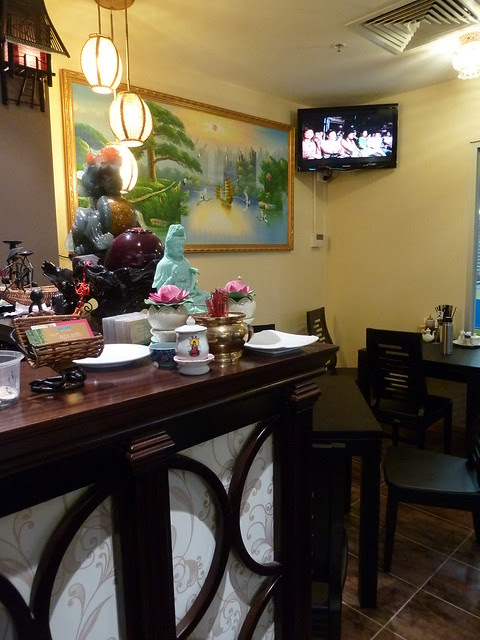 I love the thoughtful decor and the menu is pretty cool too, with quite a few unusual dishes like Cha Ca Chien Com Chay or "fish paste on crispy rice", caramelised shrimp with pork and goat casserole.  Sadly a lot of these more unusual things were not available that day - hopefully it was just a recently-opened thing. 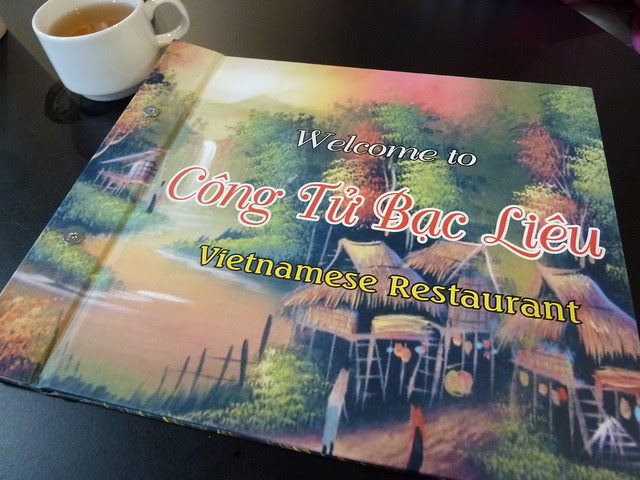 Pandan tea comes as standard which is a refreshing, floral South Vietnamese touch. 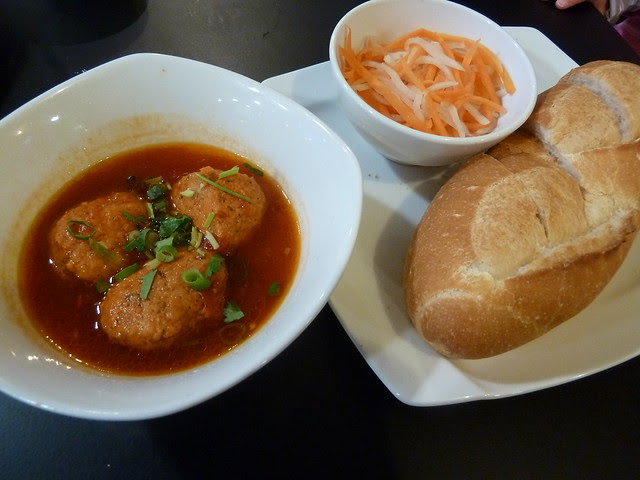 A DIY sandwich with meatballs and pickled carrot and daikon.  The meatballs were really good, pleasantly fatty and so juicy.  They were so soft and tender, it somehow defies physics that they stay together.  In hindsight this was probably a bit overpriced when the same thing, un-deconstructed at Nhu Lan is $3.80 but relatively overall it is still cheap. 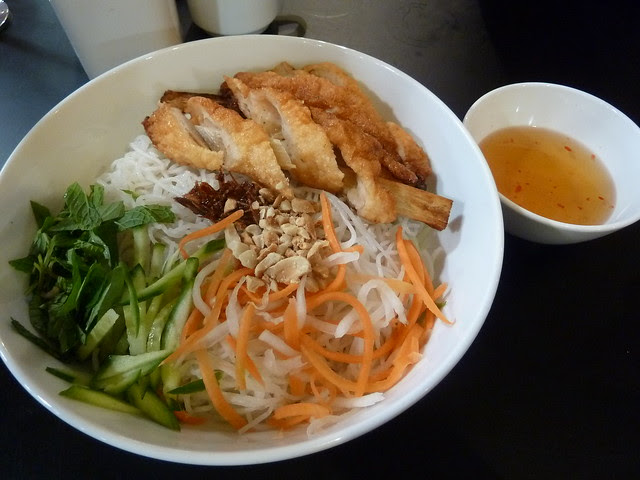 If you haven't gathered by now, I love bun salads.  Minus the nuts and depending on what meat you choose, they are virtually fat free.  Sugarcane prawns are a kind of prawn/fish paste formed around a sugarcane stalk and grilled/fried.  This was a good version - the prawns were not as plump as say, Sen's but still really good.  The salad was spanking fresh and I would wager the golden, thready shallots were fried on the premises. 
This was an excellent version of a classic.  The pork chop was really tender and tasty with a not overpoweringly sweet marinade.  The "cake" on the left is cha trung and it's a kind of steamed meatloaf made with pork mince, rice vermicelli noodles, black wood ear fungus and then topped with egg.  You can see a recipe here (thanks to Wandering Chopsticks).  Above is the bi or shredded pork skin with rice powder.  This is a great option for kids as there are just a few token vegetables but they get to try a lot of different textures.  It came with a delicious bowl of chicken broth. 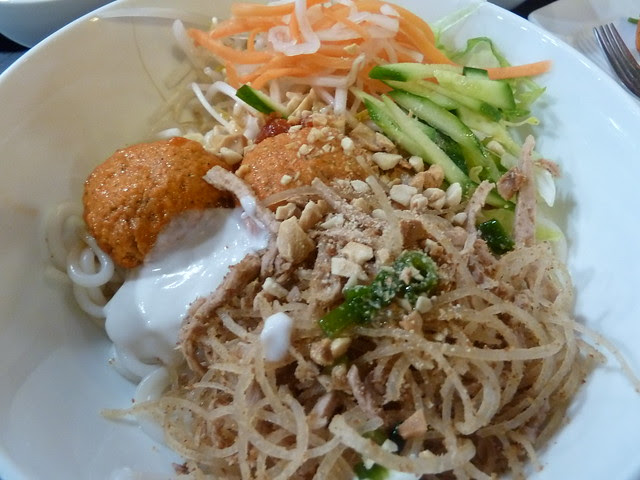 Billy had tweeted somewhat teasingly when he first had this that he had just eaten a Vietnamese dish he had never had before.  If you know Billy, that is saying something!  Indeed, these Soc Trang-style noodles are totally new to me too and they are fantastic.  Soc Trang is a province deep in the south of Vietnam.  Its original Khmer name was Srok Kh'leang meaning "silver depository" as it was the location of the Khmer (old Cambodia) king's silver treasury.  It comprised thick, white, spaghetti-like bun bo Hue noodles, meatballs as featured above, salad, bi and crazy crazy COCONUT CREAM!

The coconut coated everything giving it all luscious slipperiness while the tangy tomato of the meatballs shone through.  The coconut made it taste slightly Thai which might represent Soc Trang's location in the deep delta.  I shared Billy's delight in this unusual and unique regional dish.  See here for more info.  Interestingly, the Bac Lieu in Cong Tu Bac Lieu's name is a neighbouring province to Soc Trang while Tra Vinh just down Nicholson Street is yet another neighbouring province.

I really hope NHCTBL's gaps in the menu are only temporary as it is so refreshing to find regional specialties among the sizzling plates.  Meanwhile Westville Central's shops are slowly filling up.  Next to NHCTBL is a bubble tea place that as well as pearl drinks, sells balut (fertilised chicken eggs).  Cool! 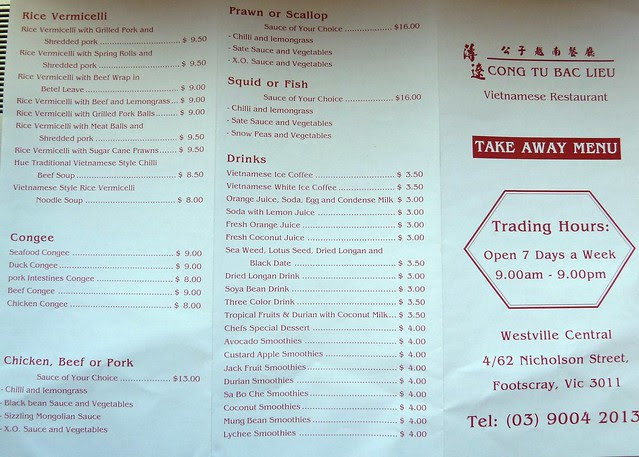 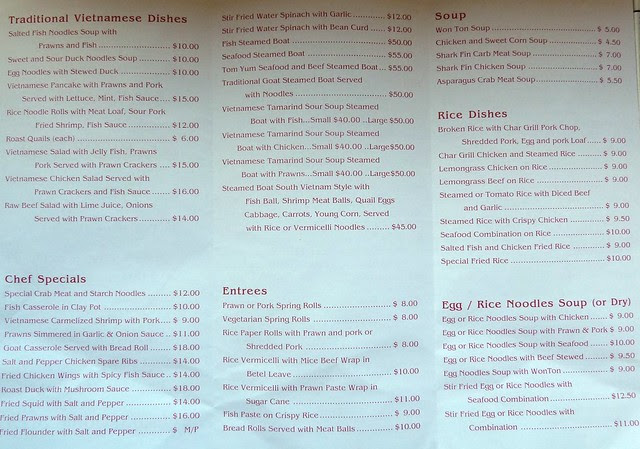