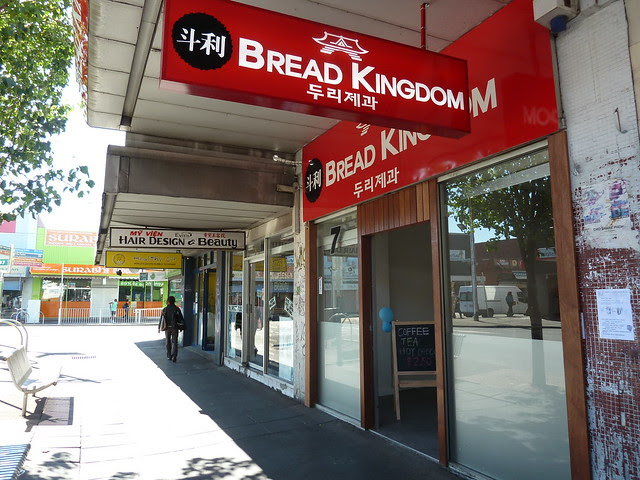 Footscray has gone Gangnam style!  In the space of a week, not one but two new Korean businesses have opened on our fair streets.  Bread Kingdom is the latest addition, a Korean bakery specialising in fluffy cakes and other sweet treats. 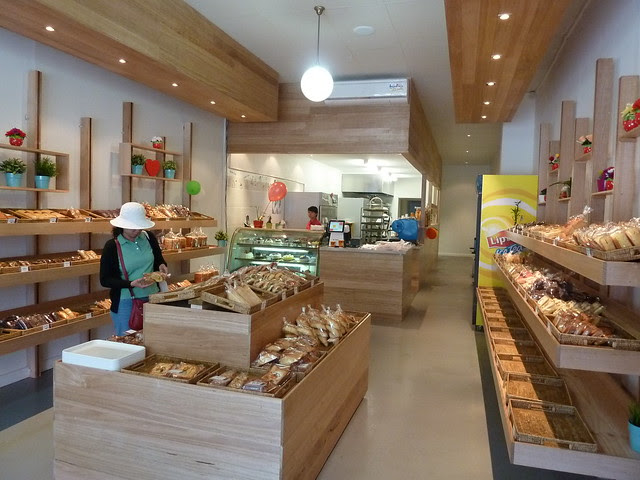 It was early in the morning when I stopped by so the baskets weren't fully loaded, but I still took my time weighing up the flavour of my mid-morning blood sugar spike. 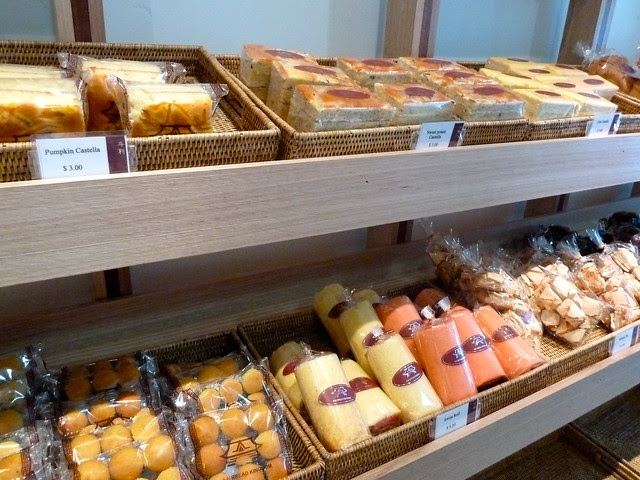 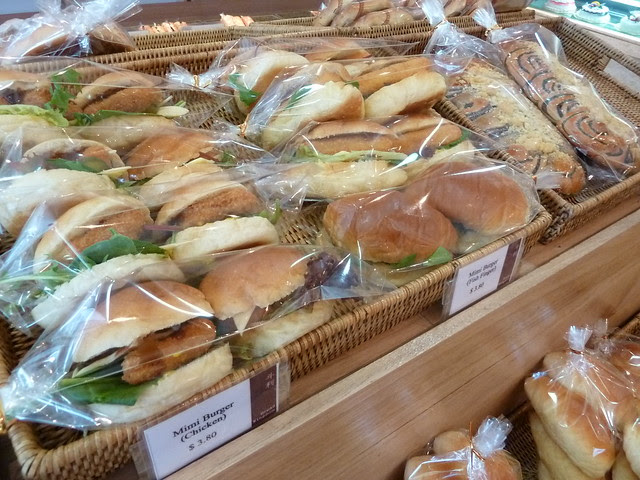 There are savouries too, like these mini burgers, croque monsieurs and toasts with an egg cracked in the middle, each one wrapped in crisp, shiny cellophane.  Everything's very reasonably priced so you can get yourself a great little spread for not much dosh. 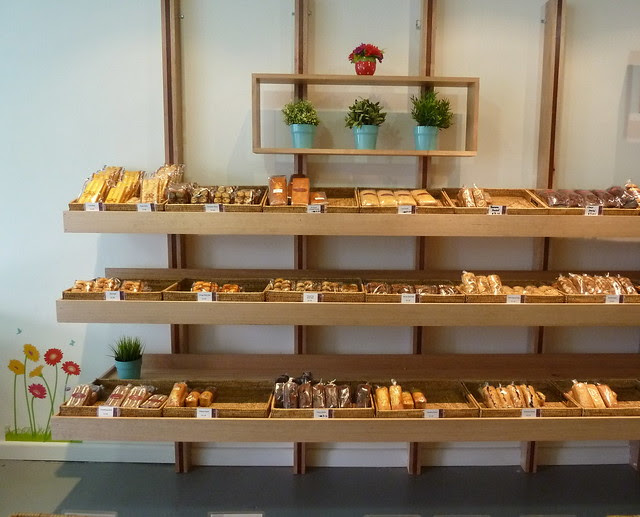 I love Asian breads.  They don't seem so much kneaded as spun, like fairy floss.  This means that for each earnest Sourdough Kitchen fruit bun, I could cram in at least five Breadtop baked goods, each one bristling with different combinations of pork floss, Kewpie mayo and loads of buttery margarine.  YUM. 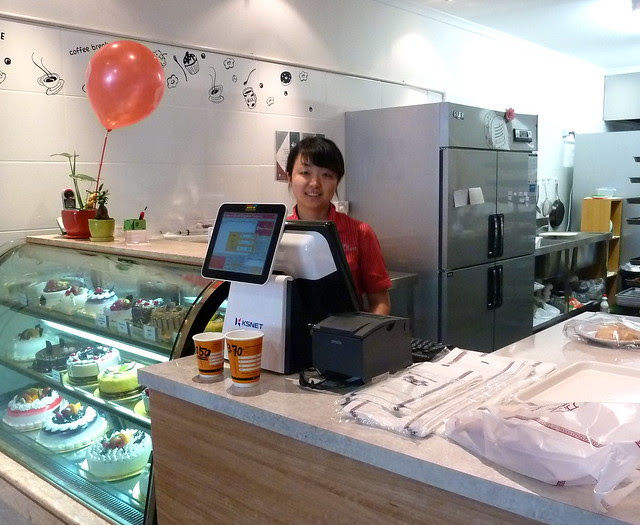 This is super-sweet Janet, the owner-operator of this franchise of Bread Kingdom, who you're likely to see seconds after entering as she springs up to you with a tray of samples.  She'd written to me out of the blue earlier in the week to tell me she'd opened up.  I introduced myself after paying for my goodies. 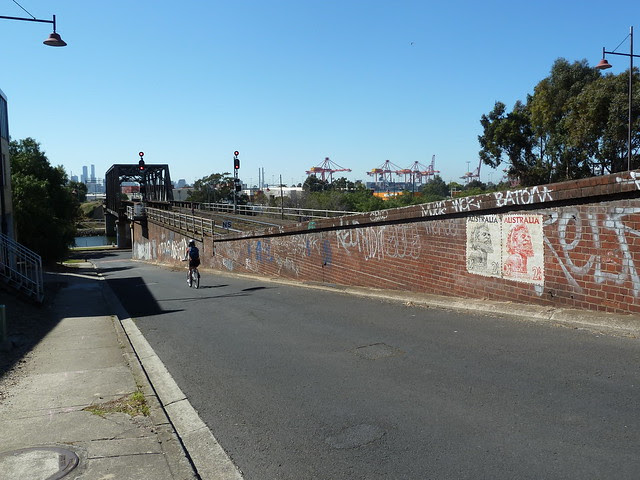 Because the station's in the way, it's easy to forget that it's a mere 9-minute walk down to the river... 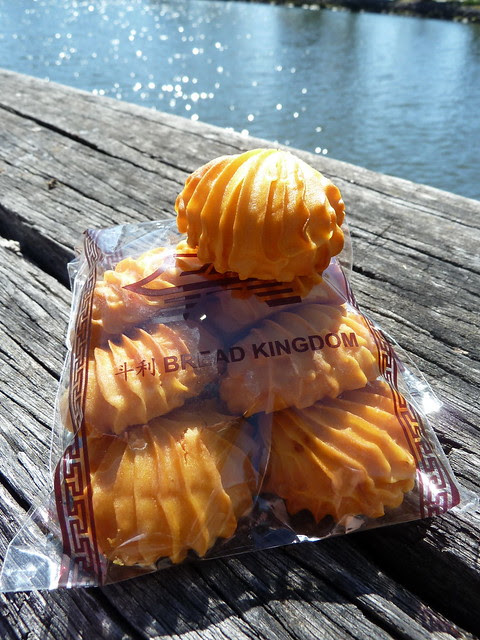 ...and what a lovely place to spread out in the sunshine and unwrap your treats, with palm trees waving above and people fishing languidly beside you.  These are "shell balls", piped cookies with an extremely tender crumb like the crumbliest shortbread.  Apparently they are made with zero flour - just condensed milk, regular milk, eggs, baking powder and surprise ingredient, white bean paste!  The bean paste (white beans as in like cannellini or navy) gives the cookies body and also adds loads of protein.  The orange flavour (above) is delicious, made with real orange peel in the mix - there's also coffee and green tea flavours.  And they are definitely 100% gluten and wheat free - I have checked with Janet that the baking powder is indeed so (McKenzie's brand).  Silly yaks, get on down! 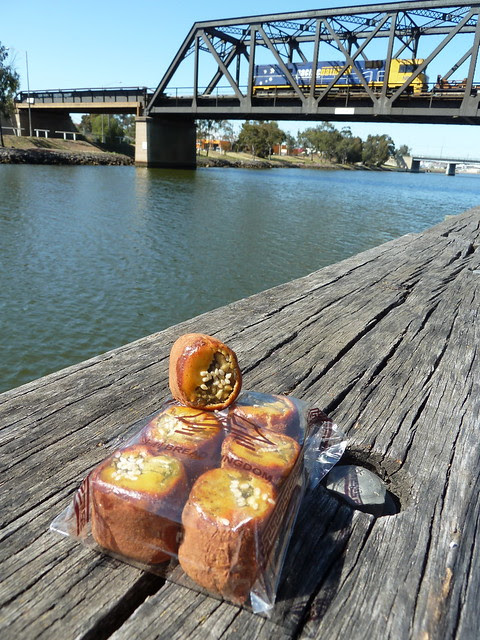 These are manju, kind of like moon cakes with a thin, not-too-sweet dough dusted with a little cinnamon and wrapped around jade-green sweet bean paste.  Yummy!  PS:  The vast majority of goods are made in store and are made fresh each day. 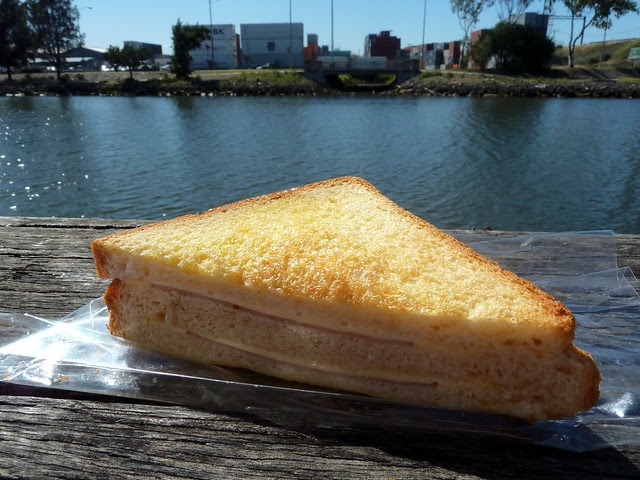 Yes, I am telling you to eat a cold, triple-decker, plastic cheese and ham sandwich.  Why?  Because it is SO DARN YUMMY.  I admit I would never have bought this but Janet had it out as a sample.  I went round and round the store and I still couldn't bring myself to leave without buying it.  The bread is soft yet crisp with golden margarine/butter, the melted cheese, the salty ham...  You might think I've lost my mind but I loved it!  Sometimes the wrongest things are the rightest. 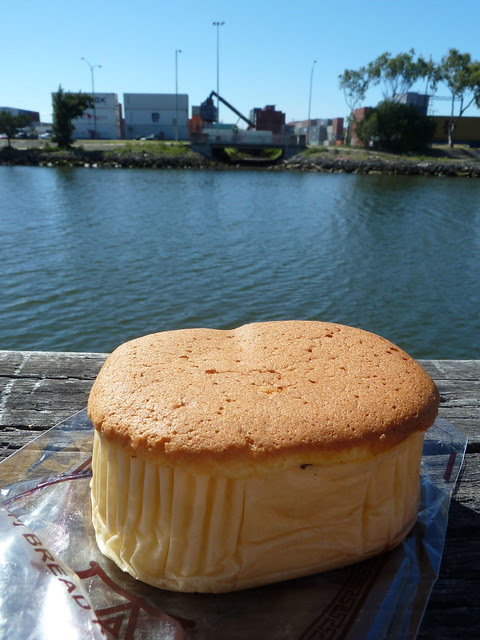 Janet threw in this freebie for us and it was a light, airy, chiffon-style sponge with just a touch of rich egginess.  Quite plain, but like sponge or tea cake, I think it's meant to be like that.

Bread Kingdom have a coffee machine ($2.50 coffees!  Party like it's 2001!) and a few small tables up the back so you can sit in and share some coffee and cakes.  The hot tip for next time is their "rice donut", made with sticky rice powder and cinnamon sugar - the rice powder is specially imported from Korea, so it's as authentic as possible.  Could it be that Footscray will now be famous for not one, but TWO donut varieties?

PS:  If you are vegan and/or interested in Korean food, you should read Alien's Day Out, a super-cool blog about eating 100% vegan in Seoul, South Korea.  Ever grateful to the reader who sent it in after I (I now realise stupidly) said Korean was not vego friendly.  :-)