To me, leftovers are like dominos.  Each skerrick, each tidbit does not get thrown out but joins the next meal in an endlessly delicious loop.  That bit of leftover rice is perfect mixed into a spinach and ricotta pie...and that last scoop of ricotta is perfect spread on a thick bit of toast, topped with frozen berries, and grilled till soft, warm, gooey and sweet.

The point when it gets a bit tricky, though, is when I'm going away for a while and need to clear out the fridge.  Sometimes it's kind of awesome - bacon, featuring in today's breakfast, lunch AND dinner! - but it's a real challenge making a dinner out of a manky end bit of cheese and a pile of cucumbers.

In the spirit of the fridge clean-out, then, I present to you a banquet of a blog amnesty post, bringing together all the treats and tidbits I've enjoyed over the last few months.  Join me in clearing out the virtual crisper drawer and making a gorgeous word salad out of it all.  Then we'll be ready to enjoy all the new and exciting treats that 2015 is set to deliver! 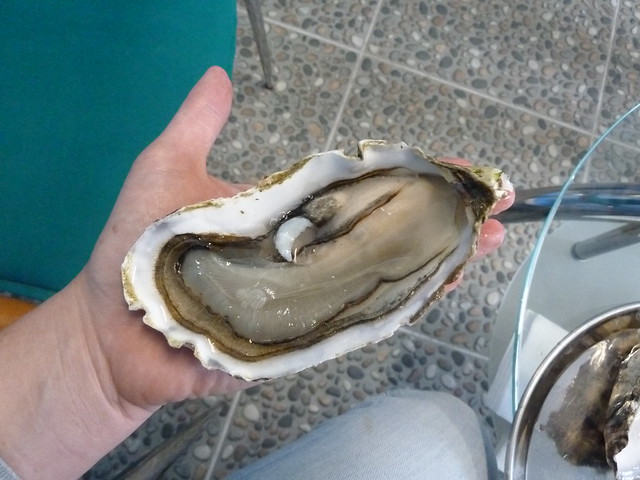 FYI, this post is going to be pretty epic.  Pretty much as epic as this oyster I ate! 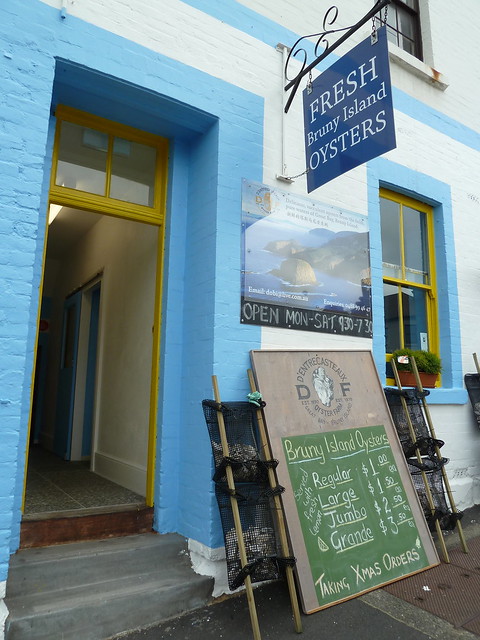 It was from these guys and was amazing, going from minerally and sharp at first chew, to creamy and unctuous at the end.  'Twas et during a trip to Hobart which I just loved every minute of. 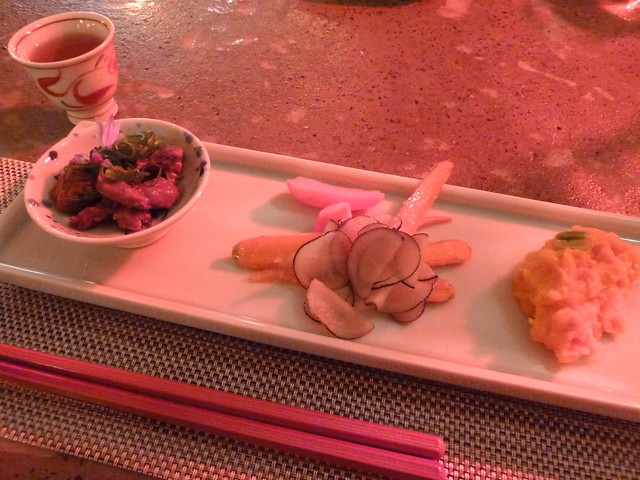 The food highlight (apart from the above oyster) was the degustation and matched sake at Three Japanese.  This place is proud to not do the usual sushi and teriyaki chicken thing, and to serve food that Japanese people would apparently go out to eat in Japan - not necessarily what westerners expect.  The sakes we tried were incredible and so varied.  If you thought like I did that clear sake was essentially metho, this is where to go to have your mind thoroughly blown.  Food highlights - chawanmushi savoury custard with sea urchin, and sesame-encrusted rice ball in sublime chicken stock. 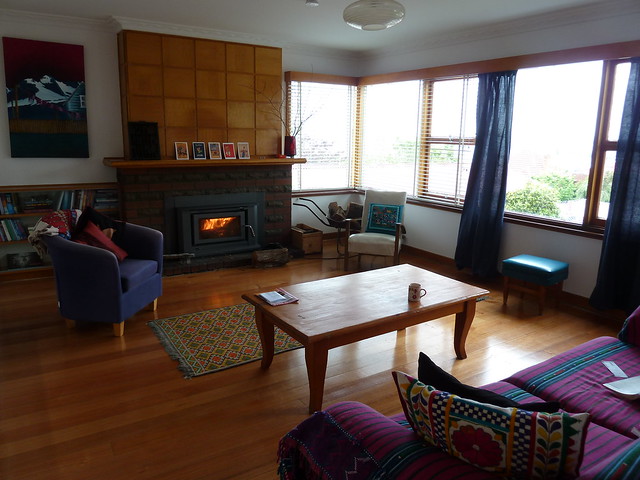 I just have to show you where I stayed - a gorgeous Air BnB in West Hobart.  I love the architecture in Hobart.  The Tuscan toilet block units Melbourne is so enamoured with have not yet spread there, and long may they never.  Look at that roaring fire!  Not visible are the harbour views from every room in the house.  It was very hard to get on that bus to the airport. 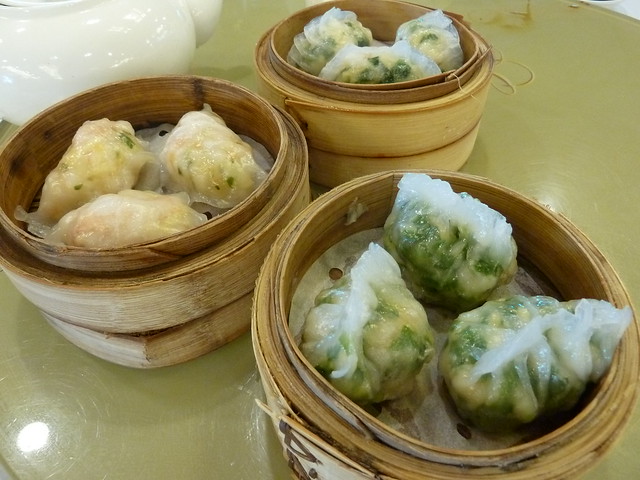 But get on I did, back to the west.  Even giant oysters can't trump the yum cha at Gold Leaf Sunshine.  This continues to be my go-to, not just in the west, but anywhere in Melbourne.  (Recently tried elsewhere - Golden Dragon Palace, Templestowe [overpriced and yawningly average]; Me Wah, Hobart [strange, staid, expensive and unremarkable]; Tao Tao House, Hawthorn [exxy, boring]. 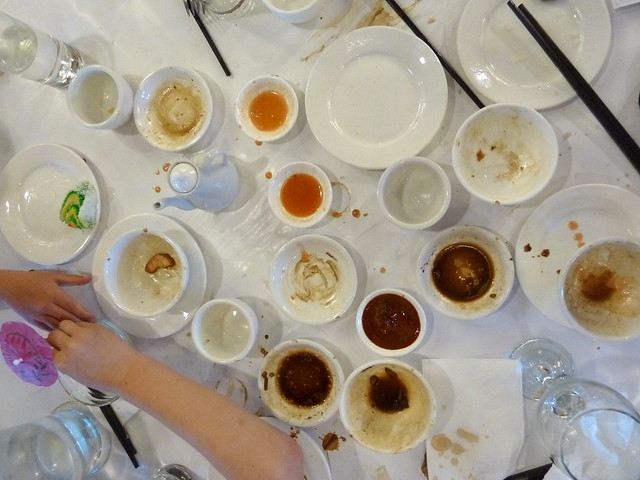 Oh, Gold Leaf, I do heart you! 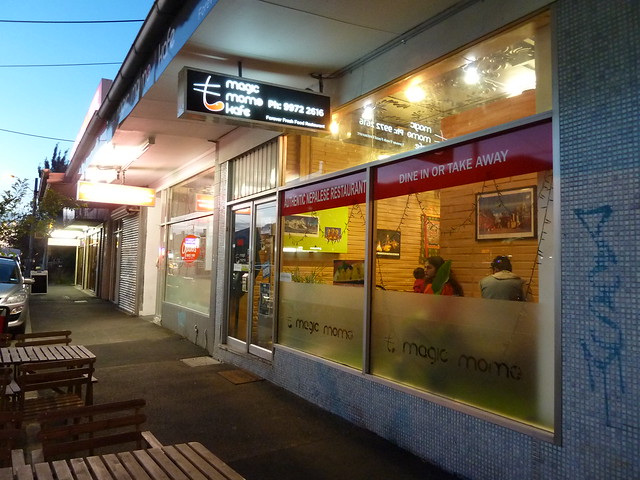 Speaking of dumplings, we recently decided to give Magic Momo in West Footscray another go.  The guys who own this place are so nice and are trying so hard.  In the last year or so they redid the whole menu to focus exclusively on Nepalese food. 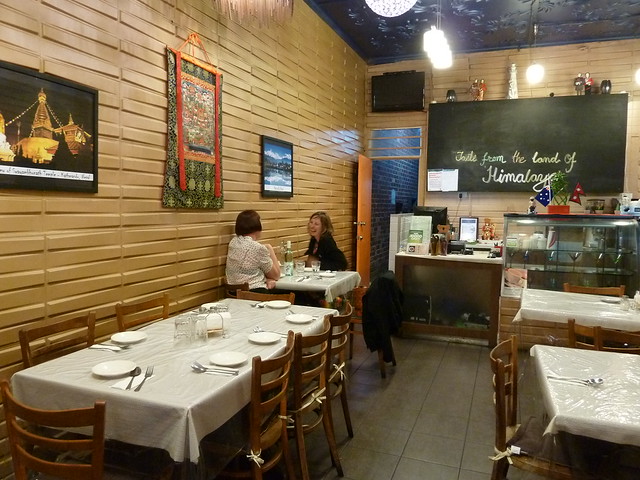 A lot of the south Asian restaurants in West Footscray and surrounds have the atmospherics of a bus shelter.  Hats off to Magic Momo who have gone to some effort with colourful piccies and posters and nice tunes playing. 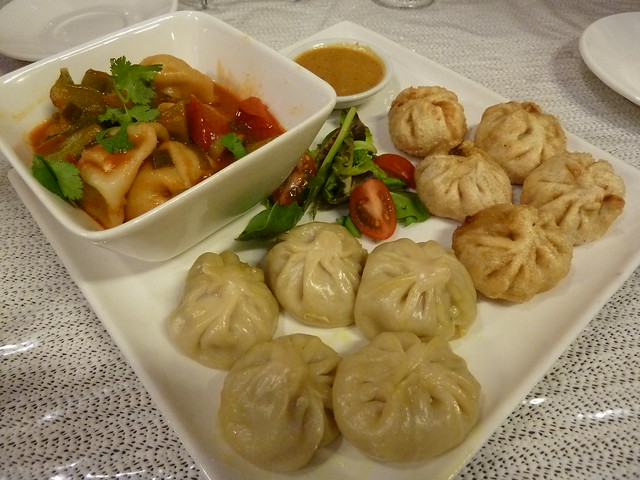 The momo here are really pretty good.  Here we have steamed, fried and in a spicy sauce. 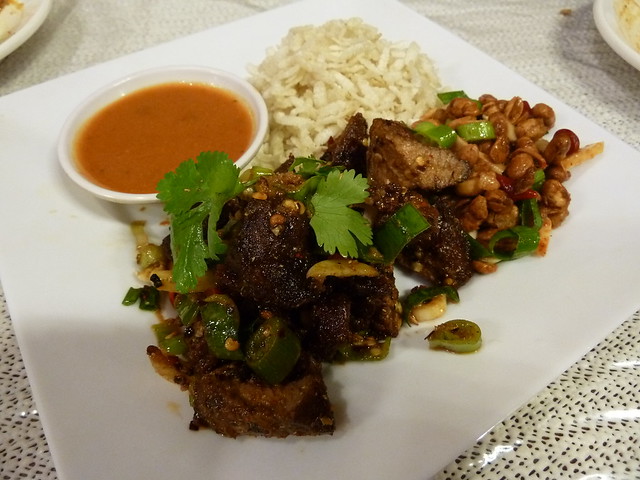 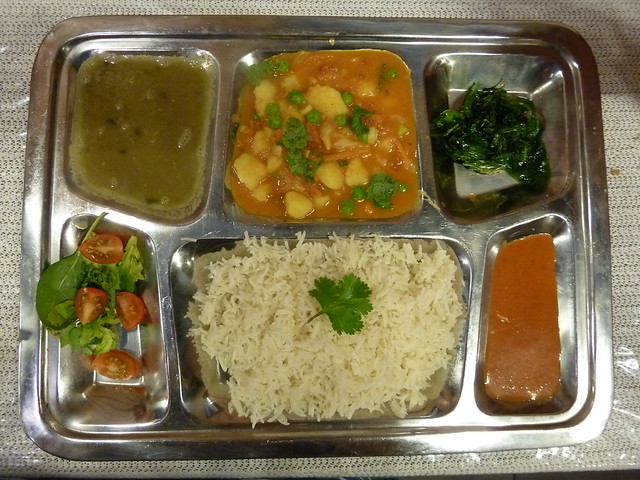 Also had this vegetarian thali-style dish which we weren't mad about - everything on the plate needed more oomph.  Go, bring a BYO bottle and give Magic Momo a try.  I think you will be pleasantly surprised. 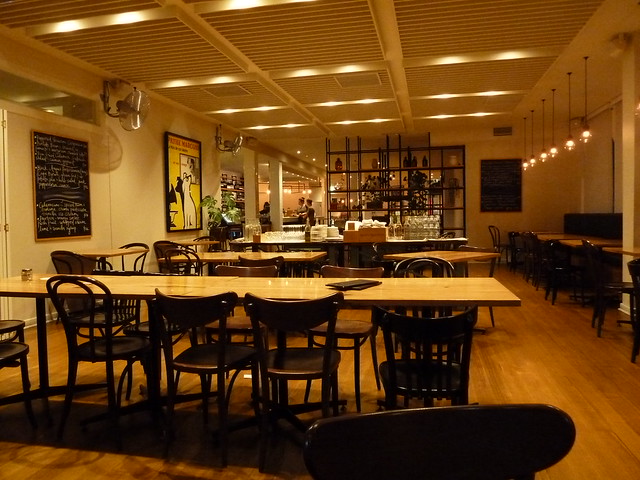 Over December we also really got into the Plough.  Scott Thomas, who used to run the Courthouse in North Melbourne and the Montague in South Melbourne, recently took over as head chef and the food has done a complete 180. 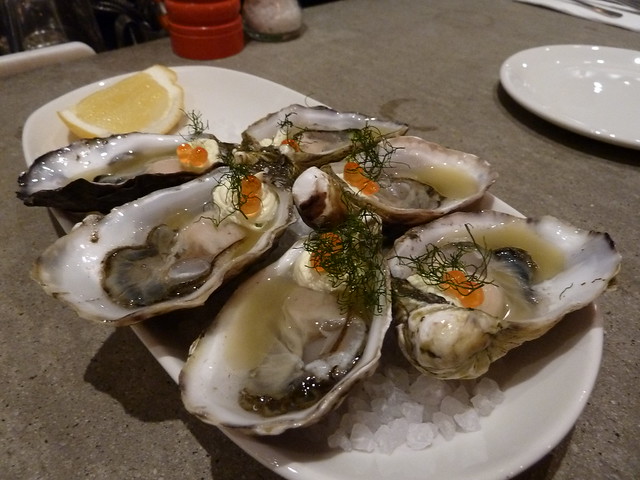 LOOOOOOVED these oysters with creme fraiche and fish roe!!!  Such an inspired combination. 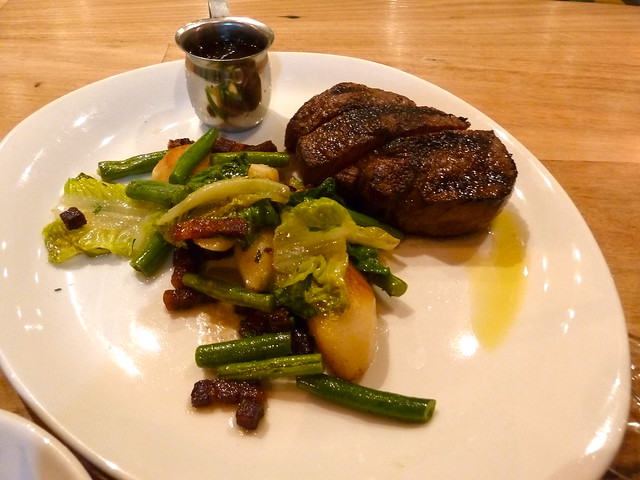 We have eaten a lot of things on the menu now and are always very happy.  There are a few small misfires, like kipflers in duck fat that weren't crispy enough, or a millet salad that needed a bit more zing.  But on the whole, I think the food here is fab.  Congrats on snaring Scott Thomas and long may his steady hand steer this plough. 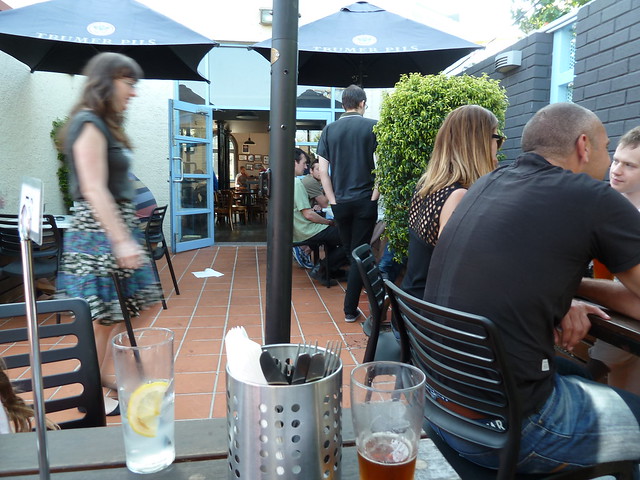 The other big news in the Footscray pub scene is that Sean Donovan has sold the Station!  This news was met with much devastation.  I have never blogged about it, but the Station is one of my most regular haunts.  We went back with trepidation to see if it was still any good. 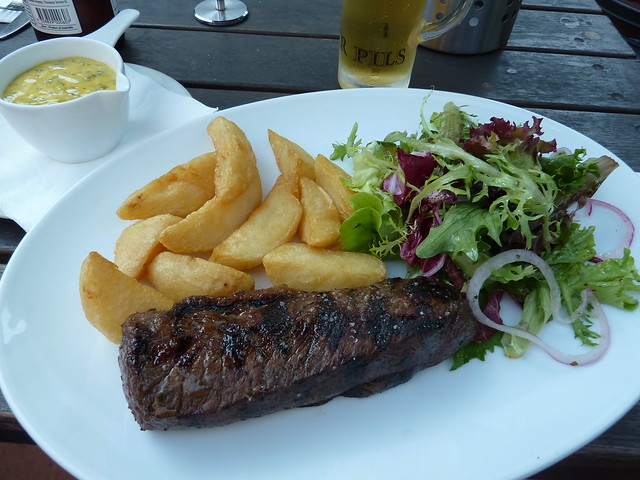 Well, a rump like this does not lie.  Still as gorgeous as ever.  People think the Station is too expensive, but their entry-level steak is $28 (including chips, salad and sauce) and is bloody amazing.  A steak at most other pubs in Melbourne would be around the same price, and most are nowhere near as good.  Try it before you knock it! 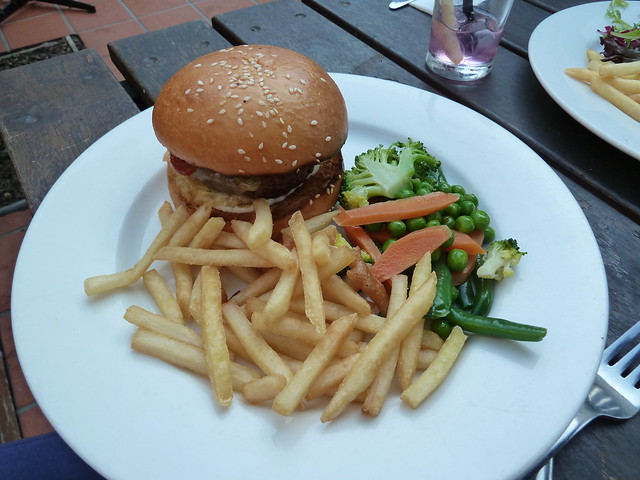 PS: Did you know the Station do possibly the best pub kids' meals in Melbourne?  They're not cheap - about $18 from memory, which includes drink and ice cream - but much better quality than the normal crappy offerings.  And the ice cream had real vanilla beans in it. 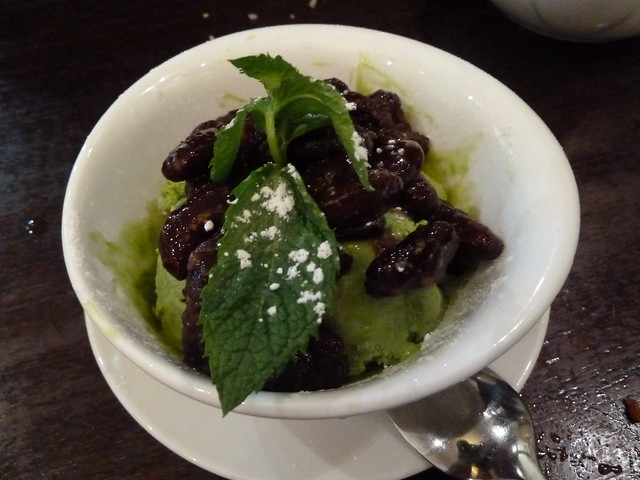 Speaking of ice cream, you must try the green tea ice cream at Sapa Hills.  You met Long in this post and Ha, his wife, makes this ice cream at home for the restaurant.  It's delicious, richly flavoured, refreshing and not too sweet.  Totally going back to try the black sesame and coconut flavours. 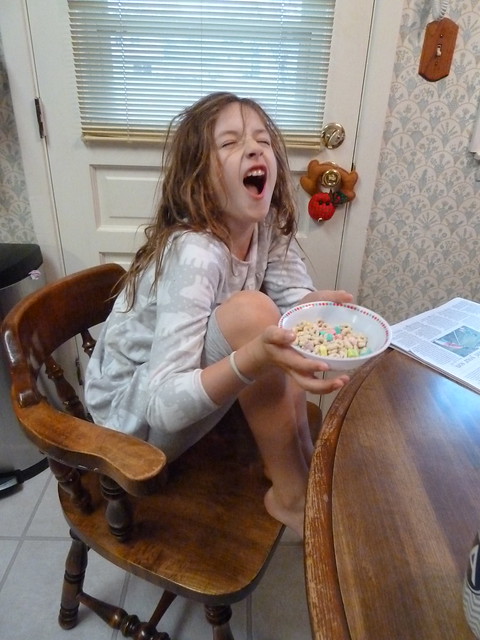 I know our banquet table is beginning to groan, but let me just wedge a few more delicious treats into those gaps.  Just a few weeks ago we got back from an amazing two-week trip to Chicago, where my children proceeded to claim their culinary birthright in the form of Lucky Charms (cereal with mini marshmallows), ranch dressing, mozzarella sticks and other nutritionally disastrous delights. 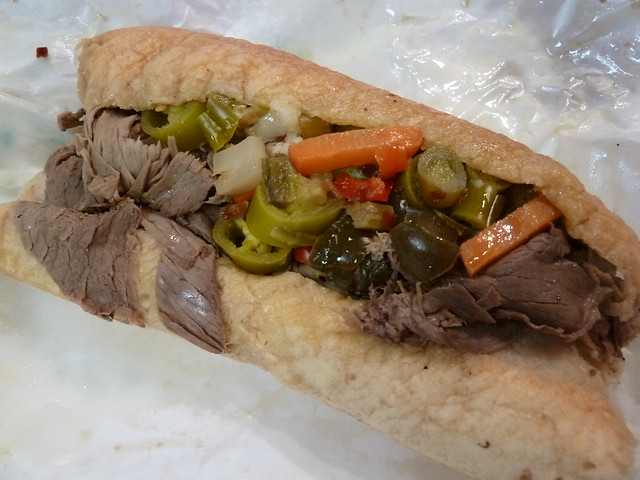 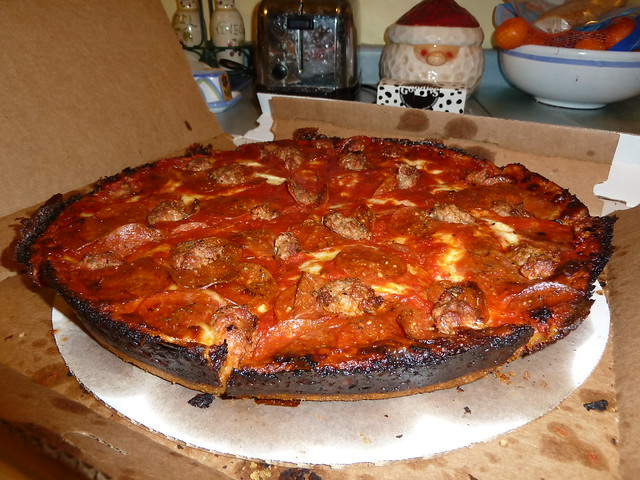 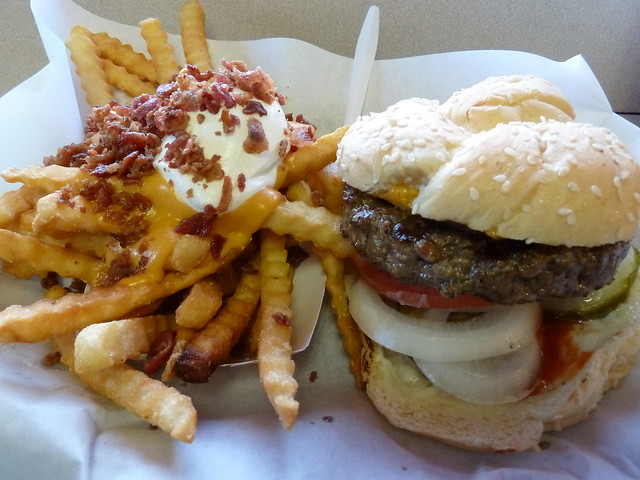 ...and Paradise Pup's drip-down-your-forearms juicy burgers and fries with sour cream, bacon, and Merkts spreadable cheddar!!!  Some of these things we ate while watching Diners, Drive-ins and Dives on Food Network, which is kind of like drinking Bollinger when you're already completely pissed.  It was the most deliciously debauched two weeks ever. 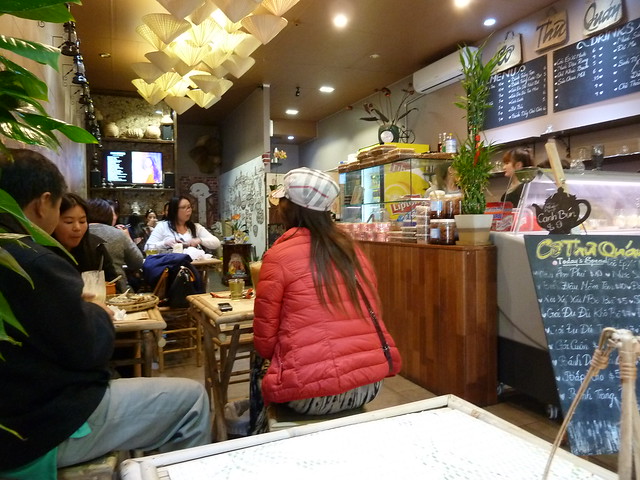 But much as I love Chicago food in all its colon-blocking glory, it was yet again time to come home to treats like those at Co Thu Quan.  I continue to be completely enamoured with this fast-paced, cute-as-a-button and uncompromisingly Vietnamese cafe, tucked away inside Little Saigon market. 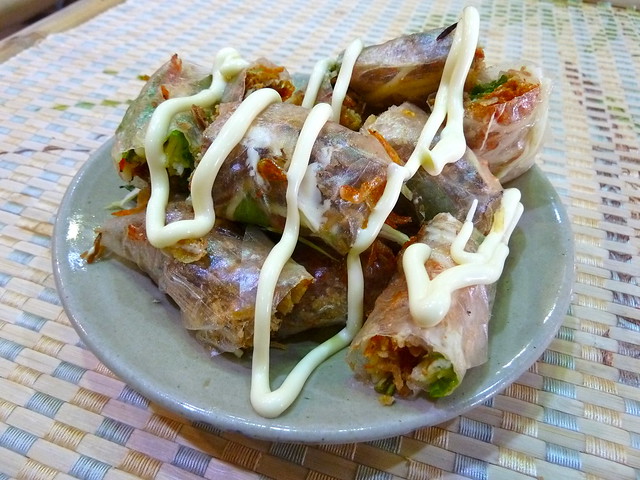 And it is here that I am delighted to present their banh trang cuon as the Footscray Food Blog dish of 2014.  These are rice paper rolls, made with either a different rice paper or a different process so that the skins are slightly crackly and tantalisingly al dente.  They're filled with julienned sour green mango, tiny dried prawns and spicy, rich beef jerky.  They are completely amazing, and just five bucks a plate.  Run, don't walk! 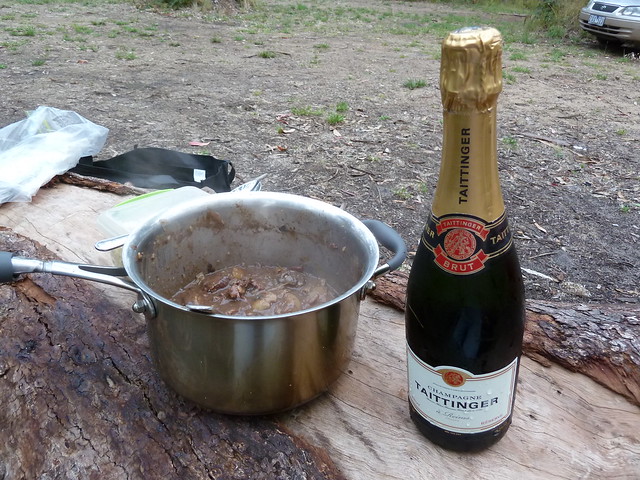 And so that concludes this pot luck of a post!  I feel refreshed and ready for all the delicious things 2015 will bring.  My fervent hope for Footscray is that as gentrification continues at breakneck pace, while we may be having lots of fun with what's new, let us continue to appreciate what we already have.  Will you join me in a cheers to that?

Posted by Lauren aka Ms Baklover at 3:30 PM