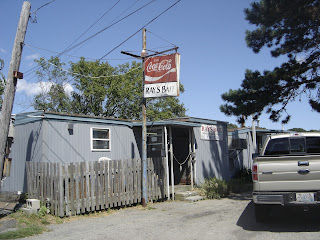 New England, the area of the US of which Rhode Island is a part, is probably best known for its seafood.  Thick, creamy clam chowder is enjoyed across the region, Maine is known for its lobster, while Maryland loves its crab cakes.  In Rhode Island, clam cakes and "stuffies" are the favourites.  As Quahog.org explains, the former is a fried ball of dough mixed with chopped clams, while "stuffies" are a bread stuffing mixed with chopped clams and baked in a clam shell. 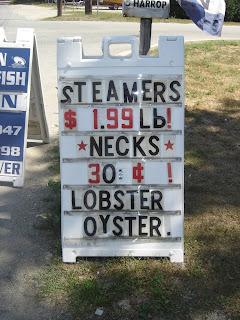 Of course, anything that is the "signature" food of an area is ripe for tourist ripoffs, particularly with something like seafood.  With just a few hours to go before our whirlwind trip of Rhode Island drew to a close, we were on a mission to find a "locals only" seafood shack. 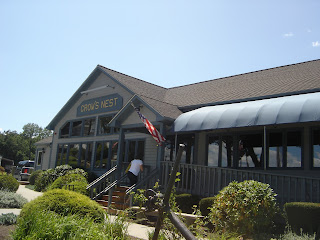 Just past the airport is the village of Warwick, and after a picturesque walk along an inlet leading into Apponaug Cove, we found the Crow's Nest.  This restaurant has been in the same location since the mid-sixties, and has been serving many of the same seafood favourites ever since.  It was packed with the blue rinse set, which I thought was either a great sign or a really, really bad one.  Luckily it turned out to be the former. 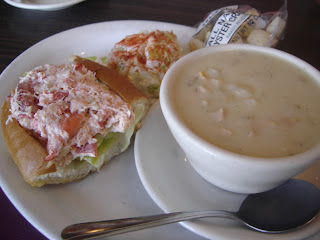 Cup of chowder and 1/2 lobster roll
Chowder, a thick soup made from clams, bacon, potatoes, onion, and herbs & spices, normally comes New England-style (white and creamy) or Manhattan-style (tomato base).  Unfortunately the Crow's Nest didn't serve the clear, broth-like version indigenous to Rhode Island, but they more than made up for it with their classic New England style.  This is high on my list of things to learn to make - so smooth, comforting, yet the taste of the clams lightens it up.  Also served is a half lobster roll, which was insanely generous with lobster - concealed beneath the shredded lobster/mayo mix were huge chunks from the claws. 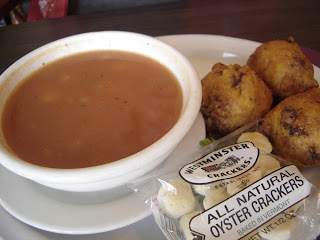 Three clam cakes with a bowl of chowder, $7
I was not so much a fan of this Manhattan-style one.  It was thin and I didn't think the chunks of potato worked as well with the bitey tomato flavour.  The clam cakes to the right were awesome though - I suspect the batter was made with cornmeal, and they were neither too light nor too dense. 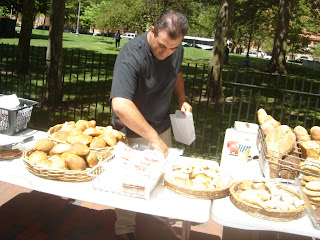 So we had had our "hot weenies" and our seafood - Rhode Island was two for two.  At a small farmer's market in the city centre, I spied a man selling "pizza strips," the last local delicacy on my hit list of RI classics.  You could say these are pieces of pizza without the cheese, served at room temperature, but I think that would be doing them a disservice.  These particular pizza strips were so tasty, fragrant with olive oil, and the pizza sauce so rich and thick.  I will try this at home - when the sauce is this good, why ruin it with cheese? 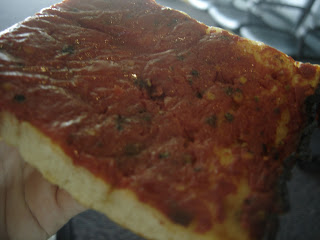 I loved Rhode Island - the place I probably expected the least from on our trip turned out to be my favourite.  The pizza strips were 3 for $1, and when I opened up the paper bag at the airport, what we found inside sums up this delightful part of the USA - the man had given us 4 instead of 3.


This is Footscray Food Blog's 100th post!  Blogging has become a creative outlet for me that I really treasure.  It has also been wonderful to meet and continue to meet so many fun, interesting people through the blogosphere.  Thank you so much for reading, subscribing, and all your comments.  I now have a Facebook page - you can "like" the blog officially now (see button to the right, if reading on the site).  I'm not sure how it will fit in, but it could become another space for readers and writer/s to interact.
My American food journey is almost at an end, and I will bring you more Footscray delights very soon.  Until then, thank you!

Posted by Lauren aka Ms Baklover at 8:01 AM