Margie's Candies is something of a Chicago legend.  Running at its original location in Bucktown since 1921, it has served up homemade candies and legendary icecream sundaes to (allegedly) Al Capone, the Beatles, and generations of Chicagoans.  Now run by the original proprietor's son, it has opened a second shop on the North Side, which was within walking distance of our pad during our recent "holiday from the holiday" in downtown Chicago. 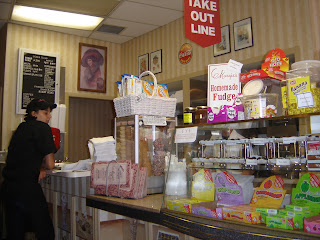 The sundaes are served in a huge white clamshell and are loaded with ice cream (there is one with 25 scoops) and a cavalcade of whipped cream, nuts, caramel, bananas, cherries, and more.  Our choice came with wafer biscuits and a gravy boat of hot, homemade chocolate fudge sauce.  Look at those fat fingers, hovering in anticipation! 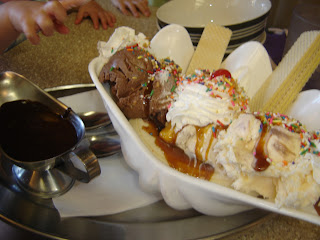 What, you want a critical review?  How could you not absolutely love it?  Even I, who tried to order a Diet Coke and got a quizzically-raised eyebrow, just had to dig in. 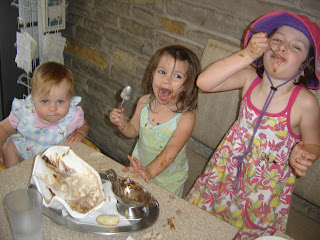 I think the fact that my oldest looks like she is about to puke is quite telling.

Posted by Lauren aka Ms Baklover at 8:10 AM