One of the things I love after coming home after a long absence is noticing all the little changes in the world around.  I have magically skipped the depths of winter and reemerged in streets studded by blossoming trees.  It was a treat to come home and see the garlic I had planted has grown tall and promising on its own, even without watering or weeding for many weeks.  One of the things I was most excited about, however, was the impending opening of the Korean BBQ House at the old site of Thai Tho in Hopkins St. 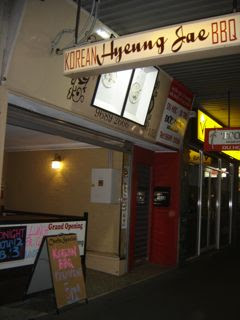 Supper Club girls, I know we have our date booked, and I tried to wait, I really did.  But after a freezing walk, icy wine clutched in hands, who can resist the siren song of sizzling meat and the waft of glowing charcoal?! 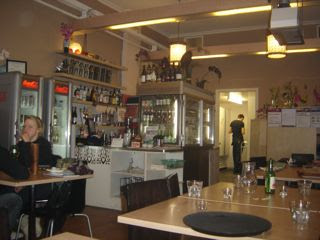 The fit-out is pleasant, with inconspicuous extractor fans above each table.  Very incongruous hip hop bumped and ground on the stereo all night.  The menus have a cute list of Korean greetings at the front as well as lots of droolworthy pictures.  We opted for the $25 per head banquet, which offered 4 courses.  It's all about the value, people!  Nothing to do with being greedy at all! 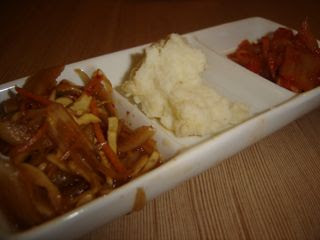 Complimentary appetisers arrived first.  On the right is kim chi or fermented cabbage in chilli sauce - I was not mad about this, finding it a bit one-dimensional.  The cabbage tasted flat and the chilli was neither hot nor tasty.  The white blob in the centre was some kind of potato salad, which wasn't to my taste.  On the left, bringing up the rear, was a simple salad of julienned vegetables in a sesame dressing, which was in fact very nice. 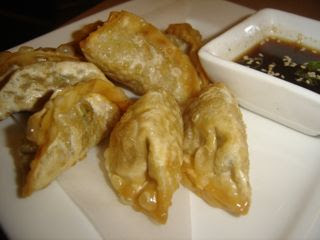 Mandu (vegetable)
These mandu or dumplings were excellent.  Bite-size pockets of tasty, smooth vegetable filling, with a delightful contrast between their fat bodies and the crispy crest on each one.  Vegetable dumplings are often a true test of a restaurant in my book, as they are often mushy and bland.  We couldn't pick what the filling was (potato, perhaps?) but it was just delicious, especially dunked in the light, soy & sesame dipping sauce. 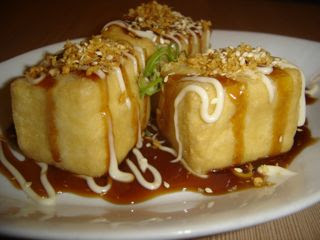 Agedashi tofu, $6
A reader had raved about the tofu so we ordered this as well.  Oh, god!  The most delicious, quivering, silky-soft tofu, fried in a very light dusting of flour.  It was drizzled with Japanese mayonnaise and teriyaki sauce, and topped with a crunchy sesame seed blend.  Absolutely unreal!

Now, I'm not sure how authentic this is, as agedashi tofu I have had in the past has been dressed with dashi (Japanese seaweed and bonito stock) and crowned with bonito flakes that dance and flutter eerily when presented to you.  In fact, I really am somewhat of a Korean food novice, so I can't judge the authenticity of everything we ate tonight.  This is somewhat liberating, however, as in this situation you are guided by taste alone rather than splitting hairs of what is authentic and what is not. 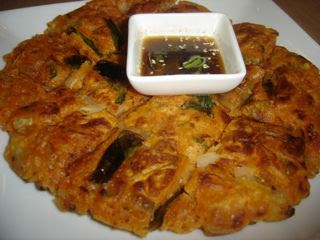 Kim chi pancake
Top marks for this jeon or Korean pancake!  Kim chi and other vegetables were bound in a tasty batter and fried until seriously crispy.  Cut into squares and dipped in the same light, sesame & soy sauce as the dumplings, it was totally unreal.  The bubbly, crunchy edges contrasted beautifully with the tasty veg and pleasantly springy dough inside.  The jeon reminded me of the Japanese okonomiyaki, a fat pancake of cabbage and other vegies, drizzled with a special brown sauce and Japanese mayonnaise.  Hyeung Jae has a choice of seafood or kim chi, and this kim chi version was absolutely excellent.  While I wasn't mad about the fermented, chilli cabbage on its own, once bound in the batter and augmented by other vegies, it was a winner. 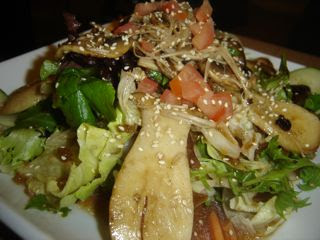 Mushroom salad
Three types of mushroom adorned this fabulous salad - enoki, button, and great, fat-stalked ones, like something out of a Korean fairytale.  The mushrooms were lightly cooked and reclined on a refreshing tangle of gourmet lettuce, cucumber, and carrot.  The dressing was a light, tangy blend of mild vinegar, sesame, soy, and perhaps a kind of mashed bean, which set off the mushroom's umami-liciousness.

Up until this point and without us even noticing, everything we had eaten was 100% vegetarian.  With the emphasis on BBQ'd meats, Korean probably isn't known as the most vegetarian-friendly cuisine, but vegetarians would be well-looked after at Hyeung Jae. 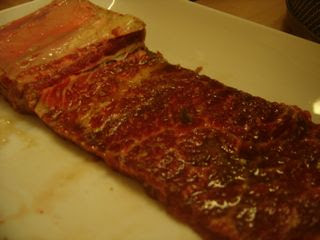 Galbi (butterflied beef ribs)
Hyeung Jae have a large selection of BBQ meats, ranging from galbi and galbisal (cuts from the ribs), to wagyu, ox tongue, squid, and scallop.  A portable BBQ is brought to your table, smoking pleasantly with real charcoal.  Our banquet included galbi, butterflied beef ribs, and slices of pork belly. 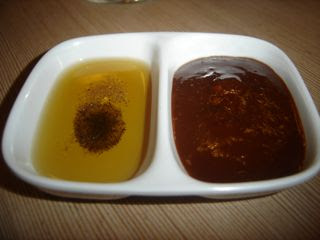 The meats are cooked deftly by the waitstaff tableside.  As the charcoal heats up and the meats begin to sizzle enticingly, you are presented with a bowl of rice; a basket of lettuce, raw garlic, and green chilli; and a neat little dish of seasoned sesame oil and Korean bean sauce (similar to hoi sin) for dipping. 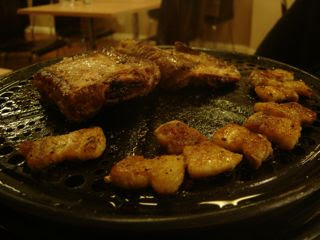 As each piece of meat is done, it is carefully snipped with scissors and placed on your waiting bowl of rice.  You may either wrap it in lettuce and dip, or gobble it up straight away.  Oh, the flavour!  The beef is super tasty, juicy, and tender, while the pork belly is divine - little caramelised chunks of porky, fatty flavour.  I had thought pork belly couldn't be cooked quickly like this, that it needed slow cooking to gelatinise the fat - oh, how deliciously, crispily, sinfully wrong I was!

We had a lovely chat to the young woman manning our BBQ.  She was passionate about Footscray's future and decried the lack of nightlife around these parts.  She was excited, as I am, about the upcoming redevelopments of Forges and the Royal Hotel.  My vision would be a cool cafe or two, a bar - just a small one perhaps, and small shops accessible to artists and niche retailers.  I'm sure there will end up being the inevitable Gloria Jeans and Boost Juice, but Footscray is for everyone! 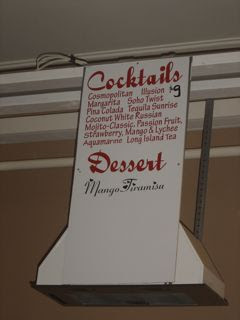 Hyeung Jae have a separate lunch menu, which is superlative value at $10 and under.  I'm looking forward to trying the classic bibimbap, vegies and meat atop rice crisped in a hot stone bowl.  There's also japchae, Korean noodles made from sweet potato, or jajangmyun, black bean noodles, as well as mixed seafood with gochujang, hot pepper sauce, for just $10!  There's a full cocktail menu, and happy hour is between 4pm and 6pm!

Hyeung Jae means "brothers" in Korean, and this fantastic little restaurant has got what it takes to become a long-lived and much-loved member of the Footscray family.

P.S. Incidentally, I am planning another Korean BBQ expedition, and because I am meeting a friend halfway between our places, Hyeung Jae is not an option.  Can anyone recommend any of the 3 BBQ houses in Victoria St, West Melbourne, or perhaps Hwaro in the city? Or is there somewhere else altogether?

Posted by Lauren aka Ms Baklover at 6:45 AM