Hot on the heels of her dosa discovery mission, Footscray Food Blog welcomes back the paan-chewing, ramen-slurping Lizard for another guest review.  It seems the quest for good BBQ meats in Footscray is not as easy as one had thought... 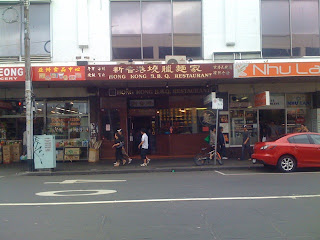 One of the features of a good Chinese restaurant is usually when its name comes with the BYO sticking stoutly on the end, with cheaper-than-IKEA chairs and tables hosting little baskets of condiments ranging from chilli sauce to soy sauce and vinegar. The restaurant should be filled with herbal-smelling grandmothers and poorly laminated menus, the plastic peeling back to expose paper that’s already been stained somehow by various liquids of dining. It’s almost as someone should write a book titled “Feng Shui Of Fine Food: The Signs Of An Excellent Chinese Restaurant”. 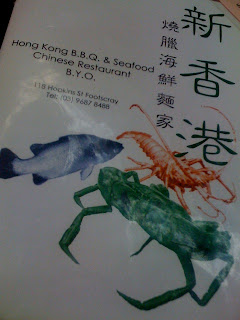 Hong Kong BBQ & Seafood Chinese Restaurant BYO, in Footscray, had all of those favourable signs above, as I seated myself opposite my mother, taking care to check the table for any stickiness or hidden oil spots (favourable signs – but not so favourable for those who wear expensive clothes).

My mother adores Hot n’ Sour soup, and I adore BBQ meats. I cannot pass a shop window of hanging BBQ meats… Crispy Pork, Peking Duck, Char Siu (Sweet) Pork, Soy Chicken, without causing a scene. As a matter of fact, I used to live in Abbotsford and I tasted every BBQ restaurant’s produce until I found my clear favourite in Victoria Street’s Little Vietnam. But I digress. 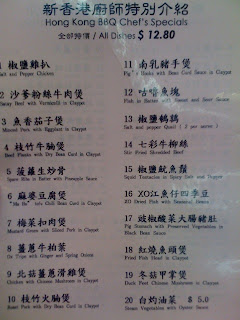 The dour hostess waited impatiently as my mother and I scoured the Specials menu (a light reading to arouse our appetites), noting Salt and Pepper Duck Tongues, Pig Hooks, Mongolian Deer, before settling for the old-time favourites: Hot n’ Sour Soup, Two Roast (Char Siu Pork and Peking Duck) on Rice, and Steamed Greens with Oyster Sauce. The total came to $18.80, not too bad for two people. 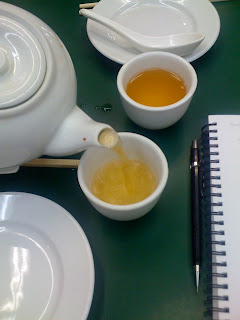 Mother and I were getting into reminiscing about past meals at other Chinese restaurants, including that one delicious Hot n’ Sour soup at a Thai restaurant, but we had been only talking for 3 minutes when our dishes arrived – certain dishes will always be lightning fast, the amount of time for the stone-faced men in the shop window to dice the roast meats with their oversized cleavers and for the greens to steam nicely. 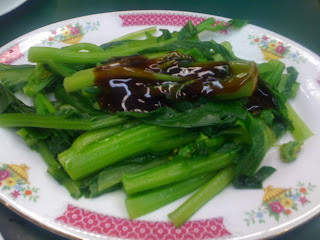 At first glance… only the Steamed Greens looked appetising. The roast meat that sat on top of the rice looked as though it was 70% fat to 30% meat. The Hot n’ Sour soup – well – it reminded me of this one waiter, at the pub I was a dish jockey at, who would pour both sour cream and sweet chilli into a small bowl, and mix it up before dipping his wedges into it. 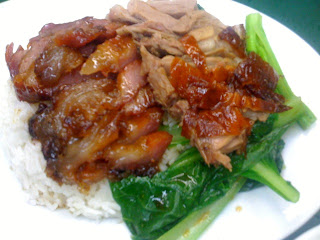 Tasting the Char Siu Pork first, my worse fears were confirmed – what meat there was, overcooked and flaking, a worse sort of contrast to the greasy fat that overpowered the sweet red marinade. The Peking Duck was better, but the duck must have come from Australia’s Next Top Model: Duck Version – too much bone, not enough meat. The skin was still nice, with star anise flavours. 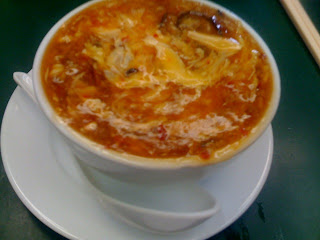 Now, I haven’t had much Hot n’ Sour soup – the ones I’ve had in the past were thin, and it took some convincing by my mother that the gelatinous soup was indeed a true version of the famous soup. I tasted it – but to be frank, it tasted just like sweet chilli sauce with chunks of beancurd. Mother agreed that it was very disappointing, as it did not have the sour kick that must accompany the spiciness. It might have well been called Hot n’ Sweet Soup instead.

According to my mother, she had visited this restaurant some years ago, and its dishes had been much better – the fading proof is stuck on the glass outside, proudly proclaiming its “Good Eats” nominations for 2005 and 2006. Four years is plenty of time for any good restaurant to go into decline, be it changes in suppliers, chefs or managers. Hong Kong BBQ & Seafood Chinese Restaurant BYO is just an example of how fickle the restaurant industry can be, with new restaurants popping up every day, and old favourites becoming stagnant, dying every day as well.

So naturally we ride the wave of trendiness, rushing to a recommended restaurant within weeks of hearing it, to taste the dishes before even the slightest alternation changes the whole experience for better or worse.

Oh Lizard!  I know that when BBQ is good, it's very very good, and when it is bad, it is horrid.  This looks to fall in the latter category.  A shame, as I had been there years ago too and enjoyed it.  I guess Hong Kong BBQ needs a second chance, but really, why risk such a mediocre meal when there are so many fabulous feasts out there for the finding?

Update: This was the only place open at 9.30am the other day to buy char siu for Singapore noodles - and the pork was so good I ate half of it on the way home!  Will have to revisit.

Posted by Lauren aka Ms Baklover at 8:45 AM