Cantonese food - the food of south-eastern China and Hong Kong - was the first Chinese regional cuisine to gain a foothold in Australia, and has since become the most popular.  Over time it has morphed to suit mainstream Australian tastes, giving us "Chinese-Australian" classics such as sweet & sour pork and beef & black bean, served with a side of fried rice.  Rather than becoming a shadow of its former self, this food court "Chinese food" is real Cantonese food in a funhouse mirror - its proportions all wrong, the colours are oversaturated, and it is only vaguely reminiscent of its origins. 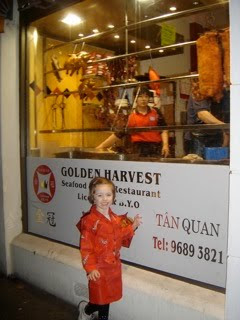 Many Australians grew up eating at "the local Chinese", usually a place with apricot-coloured napkins, knives and forks on the table, and a "mysterious East"-style name like "Jade Pagoda" or "Emperor's Garden."  If you've never tried a real Cantonese restaurant, you're in for a treat.  Golden Harvest in Footscray is a great example.  Like many restaurants of this type, it has its BBQ meats hanging in the window.  I had a "roast on rice" for lunch a while ago and was unimpressed, but penny aka jeroxie highly recommended them, so we decided they deserved another chance. 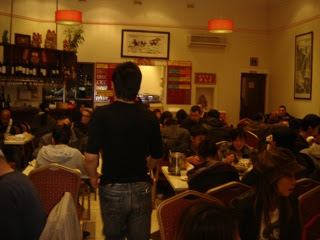 It was packed that Saturday night and we just squeezed onto a table in the corner.  Waiters buzzed about to the sound of the heavy thock thock of the cleaver on the big wooden chopping board, as the BBQ meat chef chopped up pork bellies or roast duck. 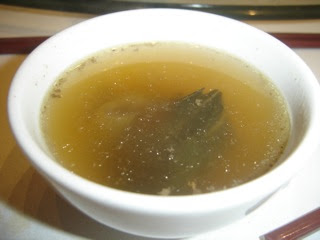 "House soup"
At these BBQ restaurants, you will often get a complimentary "house soup" to start.  If they forget, just ask. 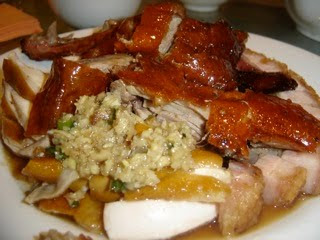 Mixed roast (3 kinds) $29.80
Here we have great soya chicken topped with a ginger "relish," and heavenly crispy pork.  The pork is my favourite BBQ meat - it's like a layer cake with juicy meat topped with a big chunk of fat, then crispy skin icing.  They serve it with a light, sweet soy.  The duck was good, but a bit greasy. 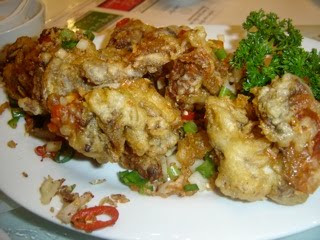 Soft shell crab with spicy salt & chilli, $19.80
If there's a soft shell crab to be found, you can bet the Baklovers will be nearby.  The crabs are harvested at a particular stage of development so that the shell is not fully formed.  This means you can eat the entire thing - shell, meat, and crispy batter in one heavenly mouthful!  I love the "sprinkle" of lightly wokked garlic, spring onion, and chilli that comes over these salt-and-pepper style dishes.  It contrasts so well with the crispy deep-fried goodness. 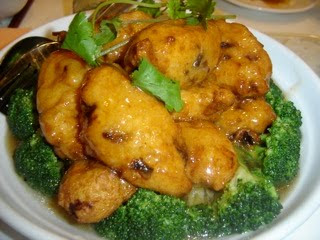 Pi-Pa bean curd, $19.80
Thank you penny for this awesome rec!  These are deep-fried quenelles of soft tofu, studded with Chinese sausage.  Their sweet name comes from their ovoid shape which resembles a traditional instrument, the pipa, that looks somewhat like a lute.  These came in a light but tasty sauce thickened with cornflour, atop lightly cooked broccoli. 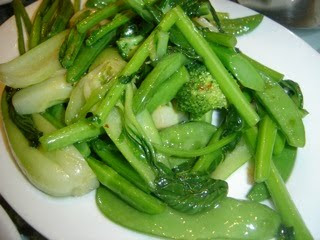 Stir-fried seasonal vegetables, $11.80
What is it about Cantonese-style vegetables that is so good?  Please don't burst my bubble and say MSG.  Seriously though, these were so crunchy, tasty, and fresh.  Cornflour-based sauces are much maligned, and for good reason when you consider the technicolour gloop masquerading as Chinese fare in food court bain-maries.  When used judiciously, though, cornflour makes a light sauce cling to the vegetables, which really brings out their flavour. 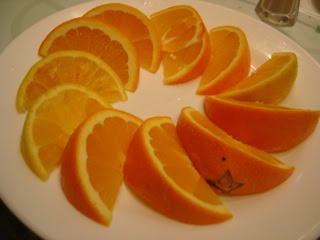 I never feel weighed down after this kind of food.  The pork is fatty, but I find that naturally stops you from overeating it.  I could happily eat nothing but the vegetables with steamed rice and a little soy sauce, all washed down with jasmine tea.  The complimentary orange slices were a lovely fresh touch to end a great meal.