Every time I crossed Moonee Ponds junction, it was there, in the corner of my eye.  A beaten-up weatherboard, just like those that used to dominate Richmond when I first lived there fifteen years ago, now spruced up or demolished to make way for units.  A small sign proclaimed "The Iliad" to the passing traffic on Ascot Vale Road, the facade of this little restaurant hidden behind twisted grapevines.

This restaurant became something of a touchstone for Mr Baklover and I.  "Imagine," I would ponder, wine in hand, one hip against the counter, "The old yiayia in the back, folding dolmades...."  When we heard that it was rumored to be threatened with compulsory acquisition to make way for a new development, we thumped our fists on the kitchen counter, sloshing our wine, fervent in our defence of the underdog.  So finally, on a rare babysitter evening, we ignored the siren song of dosa and dumplings emanating from Footscray and headed to Moonee Ponds. 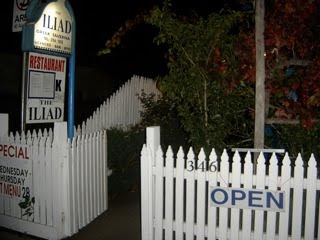 Firstly, I have to say that I am very much Our Man in Hanoi's "Vietnamese woman."  He ruminates on his sweetheart:

When I leave receipts in my wallet she will find them and later ask me questions about why I paid so much for certain items.

She loves flowers and buys them all the time.  I dare not buy them for her as she’ll ask me how much I paid.  And I’m sure it would be too much.

So true.  I will modify my whole menu rather than be forced to buy those sad specimens of herbs from Coles, de-rooted and anemic in their plastic bags, for outrageously inflated prices.  My husband is banned from doing the shopping since the time he once came back once with a designer box of Kleenex, and I had a conniption at the thought of how many boxes of "Polar Serene" 180s that could have bought from down in Footscray.  I am so used to paying less than $15 to waddle out of a restaurant stuffed to the gills with fresh, amazing flavours, that at $38.50 each, the Iliad's banquet was facing an uphill battle from the get-go. 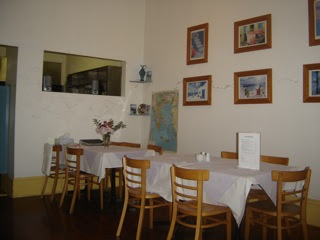 Inside, music strained ineffectively to be heard over the roar of an extractor fan.  The large dining room is pleasant, but its high ceilings and wooden floors amplified even the smallest sound.  Our chairs scraped self-consciously in and then out on the wooden floor as we moved from one table to another, trying to escape the fan noise and gain some privacy, but it droned on incessantly. 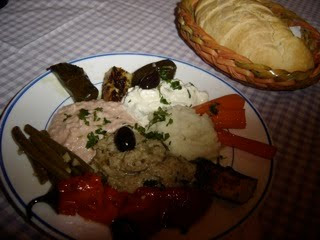 The banquet offered the best value. It began with homemade bread and a mixed platter of dips and pickled vegetables.  Tzatziki, taramosalata (fish roe), eggplant, and skordalia (garlic potato) would have been great with the warm bread if they had been a little warmer themselves.  Alas, the dips, dolmades, olives, and pickled vegies was tooth-achingly cold.  I do understand the need for health and safety, but restaurants serve cheeses at close to room temperature, so why not dips?  The pickled vegetables, particularly the green beans and the carrots, were good though. 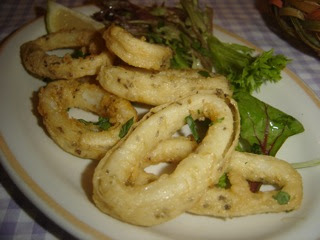 Calamari rings, which were very lightly battered and cooked quickly.  These were really, really yummy. 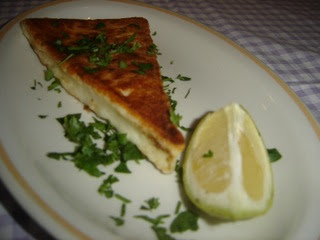 Saganaki, the famous Greek cheese that is pan-fried and eaten hot, with a little lemon if you like.  This one was too thick, in my opinion, and not cooked long enough, so that it was merely warm. 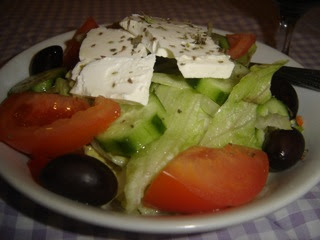 Greek salad, unremarkable except for the excellent feta on top that was so smooth and creamy.  This is the authentic way to make Greek salad, in that the feta is in a wedge on top, rather than crumbled throughout. 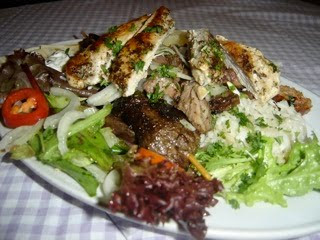 Mixed meat platter with chicken fillet, lamb souvlaki, kefthedes (meatballs), and a little lamb gyros.  Sadly, this was an anticlimax.  The meat was underseasoned, the chicken was somewhat dry, and some pieces of lamb tough.  All the while, the extractor fan thundered on.  Gazing out onto the forlorn concrete courtyard, I began to yawn.  We declined our included coffee and escaped outside, free of the infernal fan.  Through the frigid, still night air, we marched briskly to our car with arms folded defensively - full, yet unfulfilled.

Posted by Lauren aka Ms Baklover at 7:42 AM