"You totally ruined it!  Take that!" 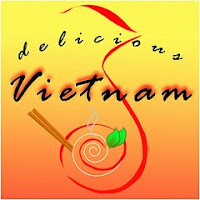 As the old black and white TV flickers, two brothers and their cousin wrestle on the floor, replaying the epic struggle they have just witnessed.  The battle of the banh mi is being waged again, this time between beefy twins Footscray and Richmond, as their little cousin Preston - small yet feisty - lands a lucky punch or two.  As the coffee table is knocked over and the glasses of soda go flying, the boys are a blur of arms and legs, and it's impossible to tell one from the other.

We are so lucky here in Melbourne, Australia, to have a number of Vietnamese neighbourhoods woven into the fabric of our city.  Melbourne loves her Vietnamese sons.  Which plucky young one will win the blind banh mi battle?

For this month's Delicious Vietnam, the brainchild of Anh of A Food Lover's Journey and Hong & Kim of Ravenous Couple, I want to share with you our latest Melbourne food blogger meetup and homage to one of Melbourne's best-loved Vietnamese imports - the banh mi.  Following the success of #balutfest and the victory of favourite son Springvale in the hot vit lon department, Billy of Half-Eaten had the brilliant idea of arranging a blind banh mi taste test to judge which bakery made the best pork roll.  The blind testing was crucial to eliminate local bias. Not that yours truly would suffer from that AT ALL...  :) 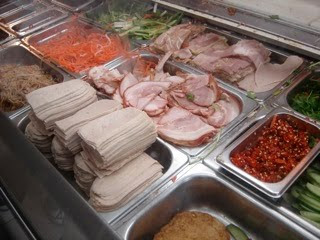 Banh mi fixings.  From left to right: gio lua, char siu, "jellymeat"
Banh mi are a Vietnamese take on a classic French sandwich.  They can have many fillings, like BBQ chicken, meatballs, roast pork, or even tofu, but the classic is banh mi thit nguoi or "mixed ham roll."  This starts with a crunchy bread roll, which is deftly sliced and spread with a chiaroscuro of flavour - a shimmering streak of pale egg mayo (aka "butter") on one side, and rich, dark pâté on the other.  Three kinds of ham are normally added - gio lua, a pale Vietnamese "sausage" of pounded pork, often seen in a banana leaf-wrapped cylinder; char siu or Chinese-style BBQ pork, often with a red edge; and a type of head cheese (affectionately known by us as "jellymeat"), which is various porky odds and ends, pressed together and bound with aspic.  The meaty trio is topped with sweet pickled carrots, often mixed with similarly pickled white radish or onion; cucumber; coriander/cilantro; fresh chilli; and a sprinkle of Maggi sauce. 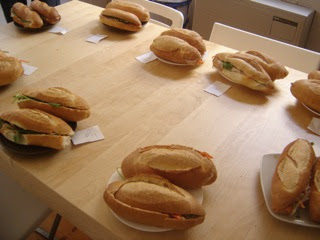 I arrived at the our "kitchen stadium" (penny aka jeroxie's cosy kitchen) and added my wager of 6 rolls from Footscray's finest bakeries to the growing pile on the table.  We started nervously at the piles of banh mi, dormant in their white paper packages.  Billy had devised an ingenious "blind tasting" system where all tasters would be unaware of the provenance of each roll.  With a nervous gulp of tea, we began our quest, slowly munching our way through 18 carefully segmented sandwiches.  Screwed up noses contrasted with emphatic nodding of heads as carrot and crumbs piled up in our laps like a snowdrift. 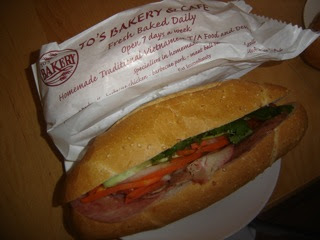 What I discovered was the best sandwiches began with good bread.  For me, banh mi cannot be made with regular, Australian-style white bread that is thick, chewy, and with a soft crust.  My favourite rolls had crackly crusts that shattered when you bit in, covering you in a confetti of crumbs and crust.  The interior of the bread should be quite airy and with an open crumb, so the filling takes centre stage.  The meat had to be fresh, tasty, and not too fatty; the pâté rich, non-grainy, and equally distributed; and the salad zingy with sweet vinegar, but not overpowering. 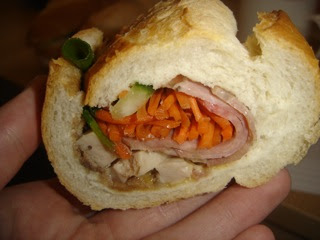 Banh mi sushi!
Sports fans - there was a clear winner.  Both everyone's individual top score and our totalled combined top score pointed to Nhu Lan of Footscray as the far and away victor!  In my own notes, Nhu Lan scored full marks for their excellent crusty bread and fresh, balanced ham combination.  I deducted marks for salad and overall flavour, which I find somewhat bemusing as I often buy a salad-only banh mi from Nhu Lan, so enamored am I of their pickled carrots.  This little shop is the busiest bakery in Footscray by far, and it's also the most expensive, at $3.80 for a banh mi thit nguoi compared to $3.20 - $3.50 elsewhere.  But let's be serious - for such freshness, flavour, and variety, how can you call $3.80 expensive?! On the scorecard above, the numbers along the top correspond to the following bakeries.  You can see each taster's individual scores, and the numbers in circles down the bottom are the bakeries' overall rankings.

That night, a battle was waged in my belly.  Over twenty-seven different pieces of ham roiled in a sea of egg butter, and a single, crisp green apple was all I could manage for dinner.  This fighter is hanging up her banh mi boots.

Thank you Billy for organising the battle and to Penny for hosting it.  I look forward to future food forays!

Posted by Lauren aka Ms Baklover at 7:58 PM