I have just come back from a weekend in Rhode Island, Baltimore, and NYC, in which I think I have eaten nothing but meat, cheese, and white flour.  Vietnamese Buddhist vegetarian cuisine could not be a better counterpoint to my "street meat" weekend!  Thank you so much to Deb from Bear Head Soup for coming to my rescue again while I am overseas and sending in another Footscray review for your enjoyment. 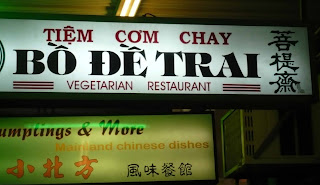 I’ve walked past Bo De Trai several times and have often wondered about what a vegetarian Vietnamese restaurant might be like. There isn’t always a lot of people in there so that made me a little hesitant too. How wrong I was. 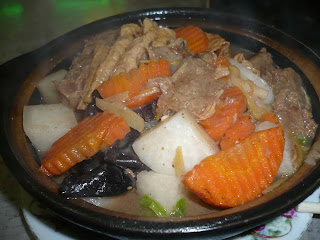 I chose the imitation claypot lam (sic) or tu buu tay cam as suggested in a review, on the wall at Bo De Trai, by John Weldon in The Age from 2003.

It was absolutely delicious and I could easily have returned the next day and had the same thing. In his review of Bo De Trai, John Weldon says of the imitation claypot lamb, “gentle on the spice and heavy on the comfort side,” and I completely agree. 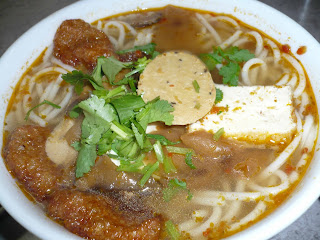 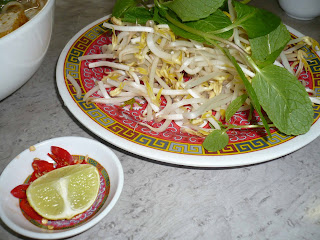 A couple of days later I returned to have a different meal, just to make sure that the fabness of the first dish wasn’t a fluke.

This was a lovely spicy soup with the thicker rice noodles, as you would find in the traditional bun bo hue. It was topped by TVP type sausage slice and some sliced fried tofu. I think the beef was replicated by fried gluten. There also some shitake mushrooms in the soup and some other vegetable or mushroom, I couldn’t quite figure out what it was. The dish came with a plate of mung bean sprouts and mint and a dish with fresh chilli and a wedge of lemon. It was a delicious soup, perfect with its spice for a cold Melbourne day.

Bo De Trai is owned by the Quang Minh Buddhist Temple in Braybrook and is staffed by volunteers. Some of the volunteers have little English, but I was lucky and was able to speak to someone on my first visit. It was a Friday night and she had worked all day and then came to Bo De Trai to work there as a volunteer and was able to tell me a little about the place.

The décor is basic but the food more than makes up for it and I am really looking forward to a return visit to try some more dishes.

Thank you Deb!  This has been on my "to-try" list for some time.  I really want to try Bun Bo Hue but as I am a gutless offal avoider, this might be my chance to sample the chilli and the spices, at least.

This is the last stop in the west... next stop, the Midwest!  I have lots of artery-clogging American goodness coming up next, but if you want any more Melbourne-based reviews for the next 6 weeks, you are going to have to help me out!  You could write a review of a restaurant or a food store, or even a recipe with an interesting, locally-obtainable ingredient.  Email footscrayfoodblog@gmail.com.

Posted by Lauren aka Ms Baklover at 8:20 AM