Oh, why could my husband not have been Vietnamese?  Instead, he had to be from the meat-and-cheese capital of the world.  Every time I come back to Chicago, instead of eating light, tangy Vietnamese coleslaw and cleansing, refreshing pho, I "have" to eat pizza, hot dogs, burgers, and beef sandwiches dripping with juice.  At least this trip I do not have a car, so I am forced to walk everywhere to get my fix of classic American food.  Sounds balanced - until you get something delivered! 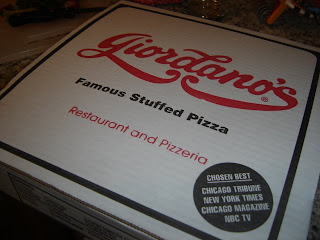 Giordano's is a chain that makes Chicago-style deep dish pizza.  I normally don't like chains, but in this case, the chain is right up there with the mom-and-pop hole-in-the-wall joints. 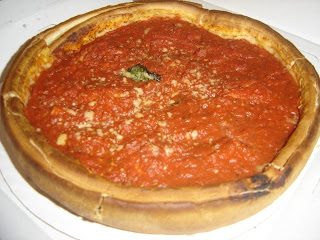 A deep dish pizza has a thicker base than a normal pizza, and the dough comes right up the sides.  It's layered first with cheese, then with toppings, then with sauce.  The sauce is often then sprinkled with just a little Parmesan.  It's really not as rich as people would think. 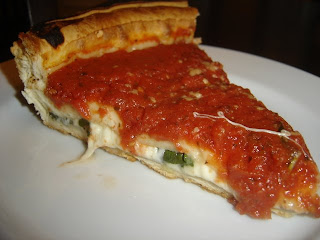 This spinach deep dish was so, so good.  The sauce was so thick, tomatoey and rich.  On a deep dish, I prefer toppings like spinach that don't need to be crisped for good flavour (e.g. pepperoni).  Giordano's crust is stuffed with cheese.  Other places will line the crust with cheese, so that it caramelizes between the crust and the pan.  Giordano's crust is doughy; other places might have a cornmeal element to theirs.

Posted by Lauren aka Ms Baklover at 8:02 AM