Do you trust your beautician?  Against my better judgment, I do, from the eyelash tint I never knew I needed to the hair product I never knew I wanted, which inevitably joins its cohorts stuffed up the back of the cupboard, unused.  Arguably however this trust comes from the fact I walk out of the salon with change from $30 no matter how many treatments and products I have had.  I am glad that my dear friend Ms C trusts her beautician too, as that particular lady's recommendation led us to Nick's Grill. 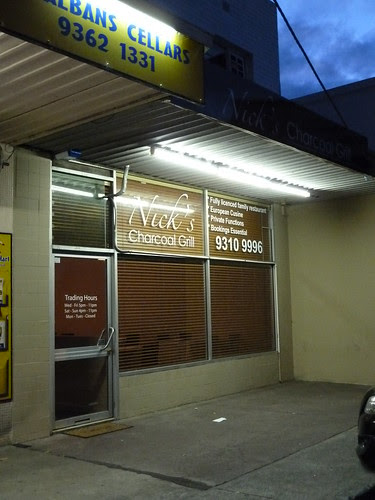 Kenny recently pointed out that "little shop strips that look a bit run down are gems", and by this logic, Nick's certainly is a diamond in the rough, tucked away in a strip in outer St Albans.  The family who run this little Macedonian hideaway have been much-loved caterers to the Macedonian community for years, and son Nick has become the earnest, genuine and friendly maitre d' for their new venture. 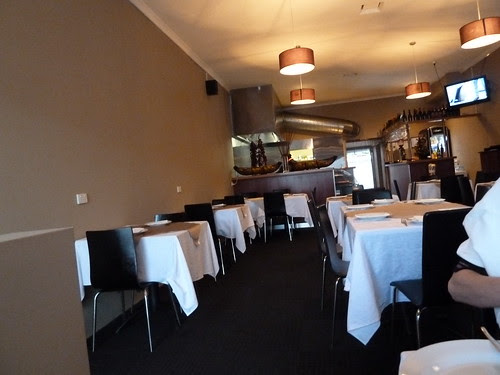 Nick's specialises in grilled meats and from our table, we could watch dad firing up the grill in an open kitchen.  They have been open for around three months. 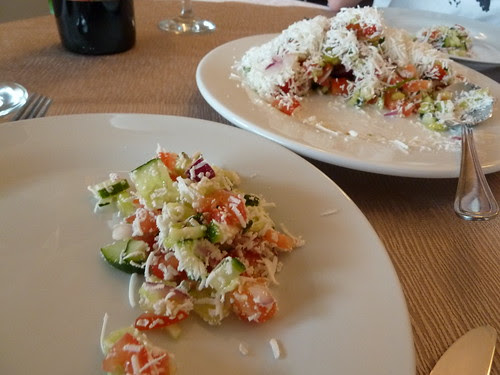 Sopska, $8
﻿This salad came highly recommended, and with good reason.  It was similar to a Greek salad in its ingredients - fresh tomato, cucumber, a little red onion and sheep's or goat's milk cheese.  However, here the vegetables were chopped into small pieces rather than the large chunks one associates with Greek salad and the cheese was grated on top, a la Parmesan on pasta.  It was so delicious - I could have eaten this alone with bread quite happily.  The vegetables were super fresh and the dressing light, lemony and tangy. 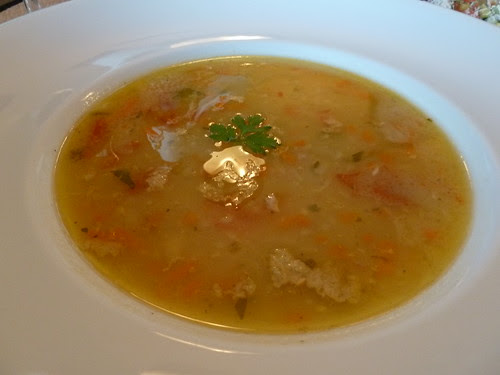 This soup is a soon-to-be menu item and we were lucky enough to be offered a taste.  It was simply divine - a thick, rich broth with carrot, potato and fat flakes of pink rainbow trout.  I have never had good luck with fish soups or curries as the fish needs a very careful hand or it disintegrates or goes mushy and grainy.  The fish flavour in this was superb, present but not at all overpowering.  The broth was thick, rich and unctuous, as fine as the best lobster bisque.  It is Nick's dad's special recipe, perfected through years of cooking in Germany.  I can't speak highly enough of this wonderful soup.  With a swish of its Macednonian petticoats, it has nudged pho off its pedestal as my favourite soup of all time.  Big call but justified!!! 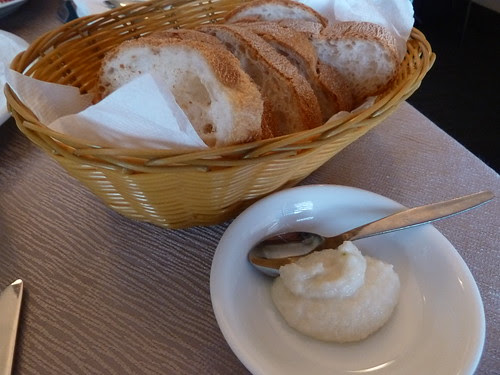 Pleasantly coarse, crunchy Continental bread was per﻿fect for wiping up every last drop of soup and salad.  The dip is makalo which is a hot garlic paste similar to Lebanese toum.  It was brash and almost acrid, great to spread on the bread and then dip in the soup.  First dates, beware! 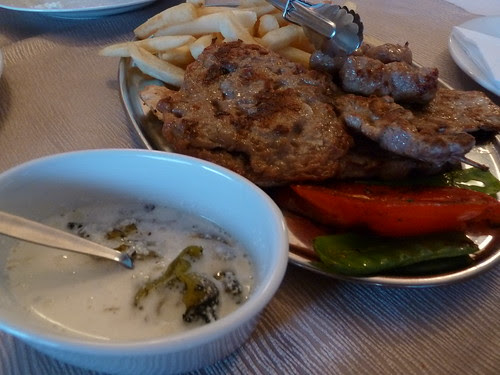 Mixed grill, $26
Time for the main event.  Most of Nick's meat platters are $17 or so and come with your choice of meat, be it cevapi or skinless sausages, raznjici or skewers, various cutlets and patties.  They all come with chips and vegies.  We went for the mixed grill for a bit of everything.  The cevaps and the very similar pork pljeskavica or hamburger were great, with a pleasantly springy and even spongey consistency similar to Vietnamese 'kebab' or 'roast pork', the sausage-like, skewered tubes or balls sold at Ba Le and Nhu Lan (I don't know the Vietnamese for them - please enlighten me if you do!).  A simple piece of grilled chicken breast was perfectly cooked and delicious.  The meats went perfectly with the makalo, served here thinned with oil and I think broth, its garlic flavour tempered somewhat.
We were so full by this stage and got defeated fast, though, only managing a bite or two of the other meats before surrendering.  I am actually not that big of a carnivore and would have liked less chips and more of the wonderful grilled capsicum.  The chips were somewhat unremarkable.  The Croatian Club in Footscray has a very similar mixed grill of just cevapi and raznjici, but their vegies (capsicum, onion and mushroom) are abundant and heavenly, plus their chips are crispier and have a special spice mix on them (I acknowledge Croatian and Macedonian are different cuisines, of course!)  Next time I will choose a single platter of just one meat and share that, and hope that there will be more room for more vegies.
The standout dish was still the rainbow trout soup, coming soon to the menu and in my opinion, it can't come soon enough.  They were so kind to give us such a generous sample (and they hadn't busted me taking photos, at least not at that stage!)  Just like in the beauty shop, we got more than we came for, but unlike yet another bottle of hair product, this soup is definitely something I now cannot live without.