What are the three sweetest words in the English language? 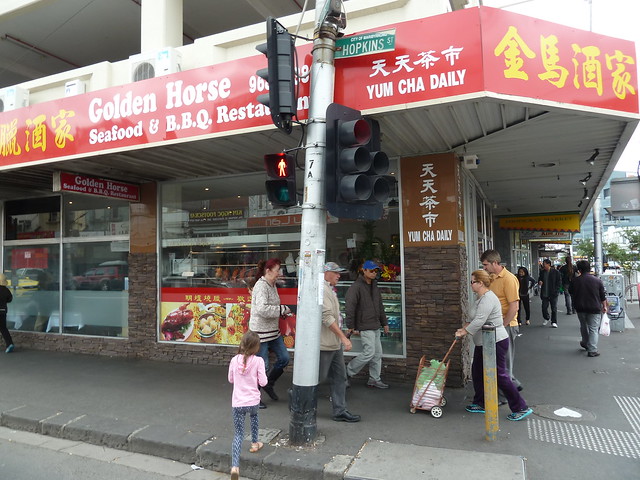 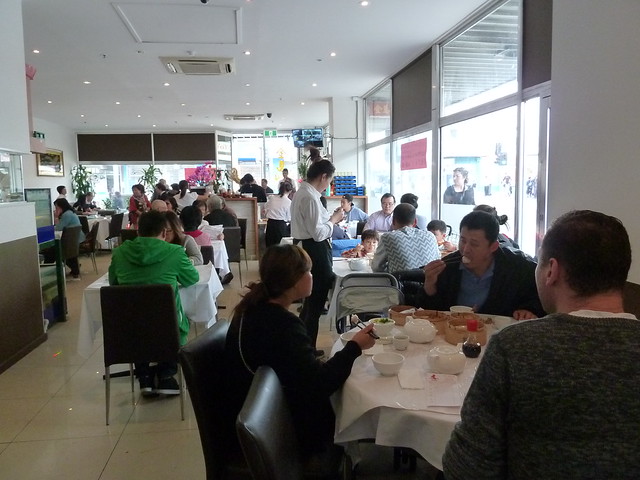 The Golden Horse has just opened on possibly Footscray's best corner site, and is ready to feed you these sweet nothings seven days a week. 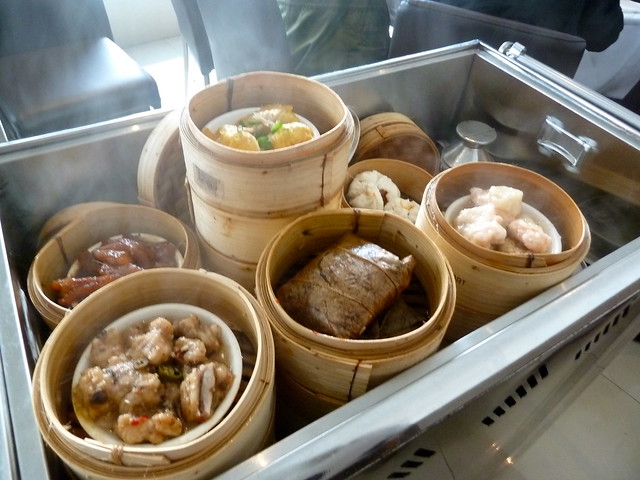 There aren't many small yum cha restaurants like this around.  Usually when a yum cha place is small, it means no trolleys, or a very small range of food.  That's not the case here.  Golden Horse have a great range of dim sum, and it's not dumbed down - I spied chicken feet, pork ribs, tendon and silken tofu with prawn. 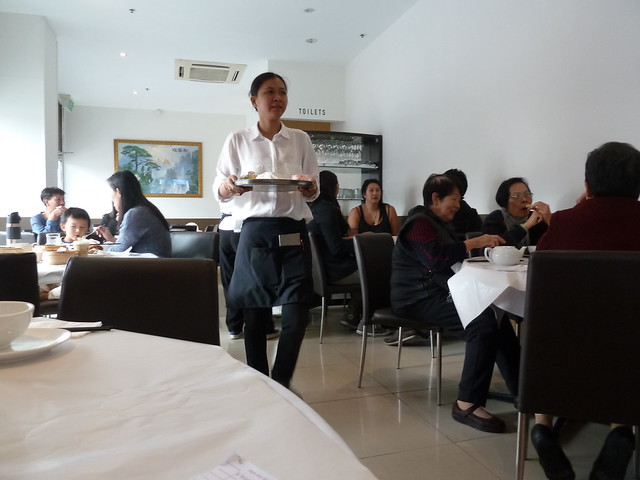 The small space does mean it's tricky to get a table of exactly the size you require, which means you might have to share a table.  I felt pretty sorry for the couple who had to share an eight-seater with me and my three grotty kids, but luckily the first trolley hit within seconds of sitting, so I could plug them with food straight away. 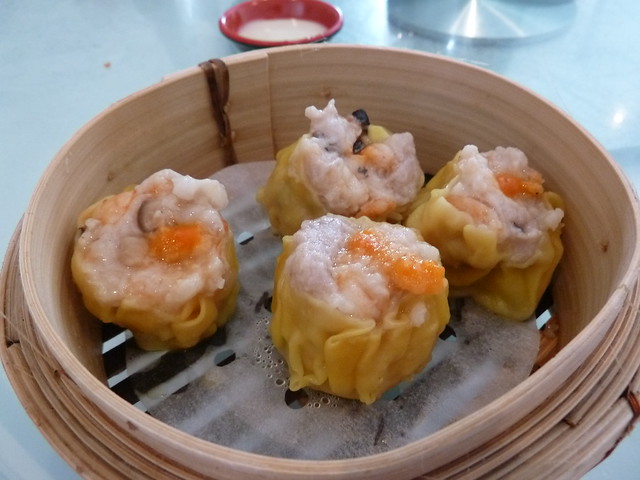 Shu mai, or "the ones with the dot on top" as they're known in our family.  They're made from prawn and pork with a wonton wrapper enclosing the bottom and sides.  These were really chunky and quite awesome.  Love how you get four to a basket rather than the usual three! 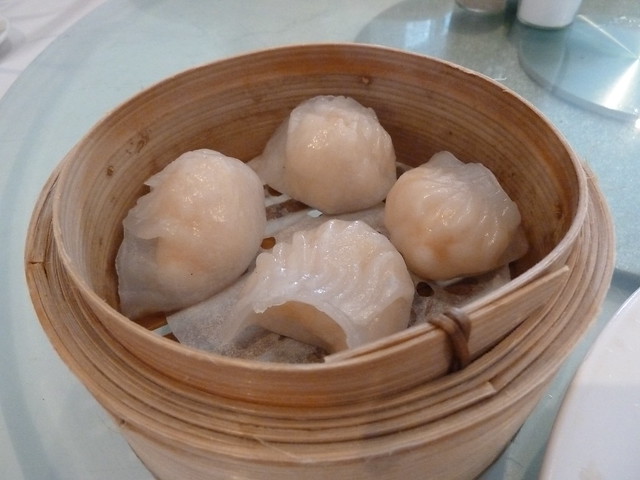 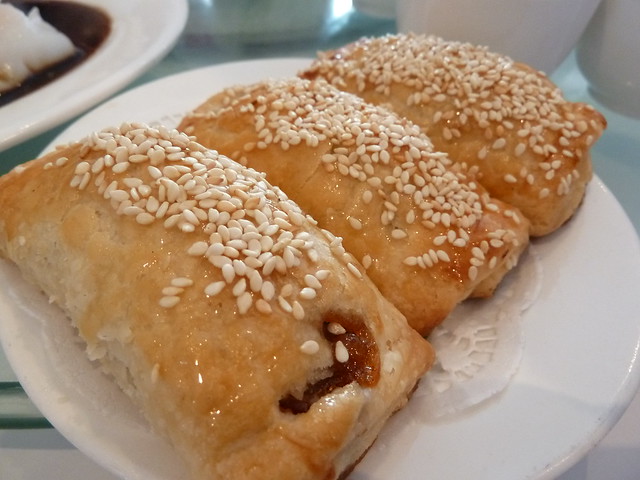 Ridiculously amazing pastry - short, flaky, feathery and totally melt-in-the-mouth.  It was curled around a jammy BBQ pork filling.  Pounce the minute you see these come out of the kitchen. 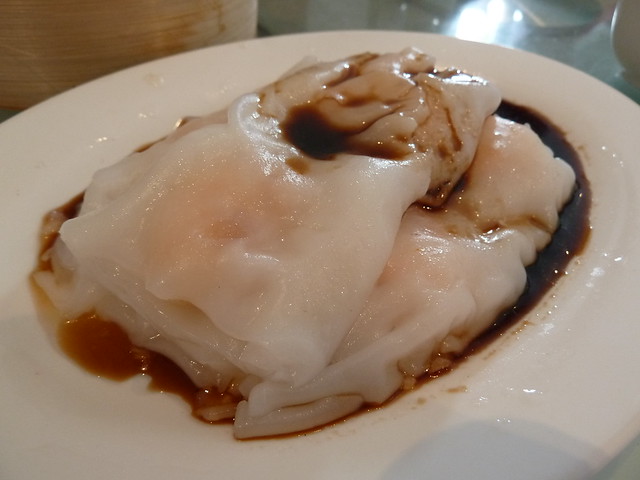 These prawn noodle rolls are one of my favourite things - big noodle sheets (like lasagne sheets) flopped around prawns.  Pro tip - attack these with an empty bowl, ie, not one full of soy sauce.  The sauce with these is really light and sweet and deserves to be enjoyed on its own. 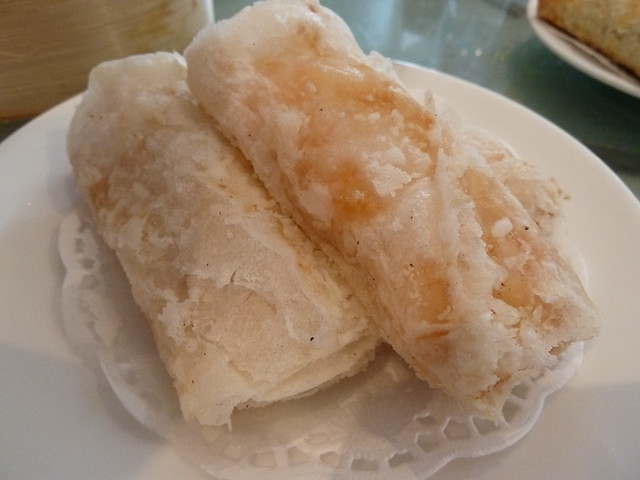 Crisp prawn rolls, I believe wrapped in rice paper, served with a little dish of mayo.  Also try the very similar golden brown-coloured variety, where the prawn is wrapped in fried bean curd skin (those ones come with a violently coloured yet delicious sweet-and-sour sauce). 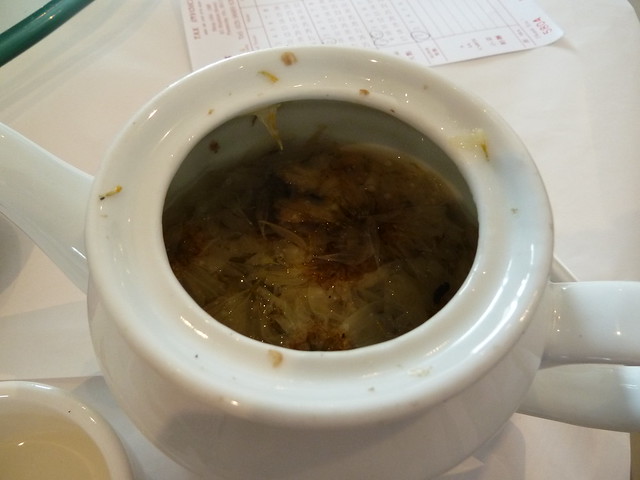 Forgo the standard jasmine and order some chrysanthemum tea.  It has a fresh taste, a little like chamomile but much more gentle. 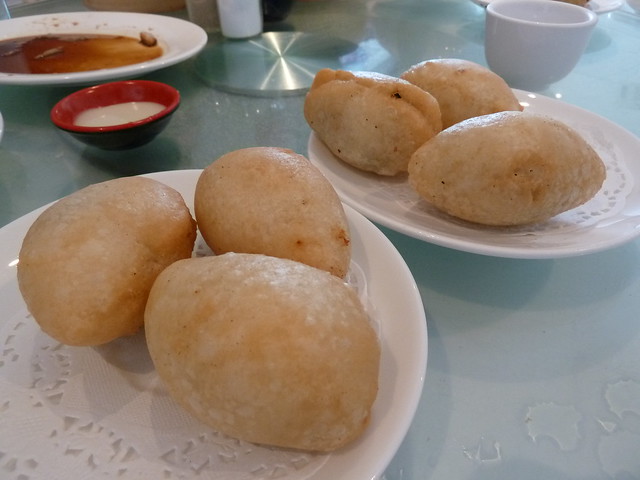 Ham sui gok, aka "football dumplings".  These have a glutinous rice flour batter around a filling - normally pork mince and a bit of mushroom. 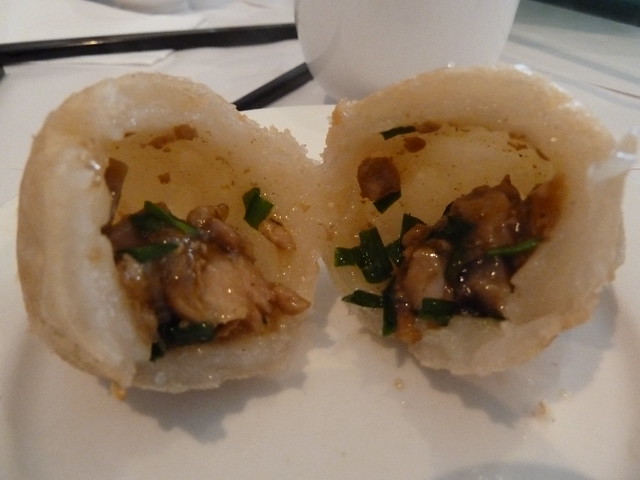 These ones had a pretty filling with chopped pork and a little (what I think is) Chinese chive.  With the perfect crisp exterior and warm, slightly gummy interior, they were great.  Try these with chilli sauce. 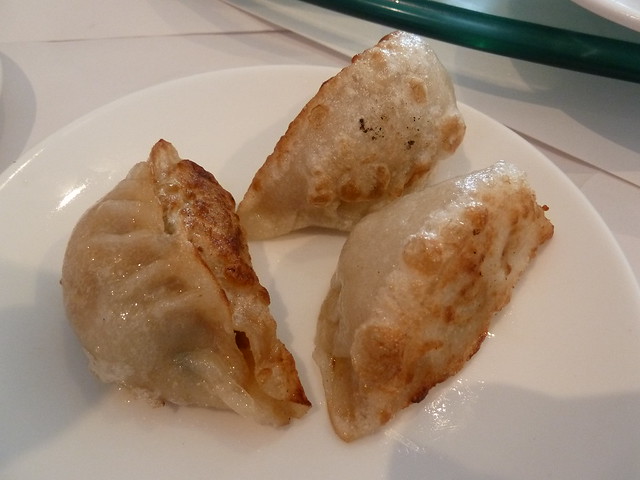 Wasn't a fan of these panfried dumps - they were not hot enough.  Honestly, I'm never a huge fan of this type of dumpling (jiao zi) at yum cha.  If you want fried dumplings, go order a whole plate for ten or so bucks at 1+1 across the road. 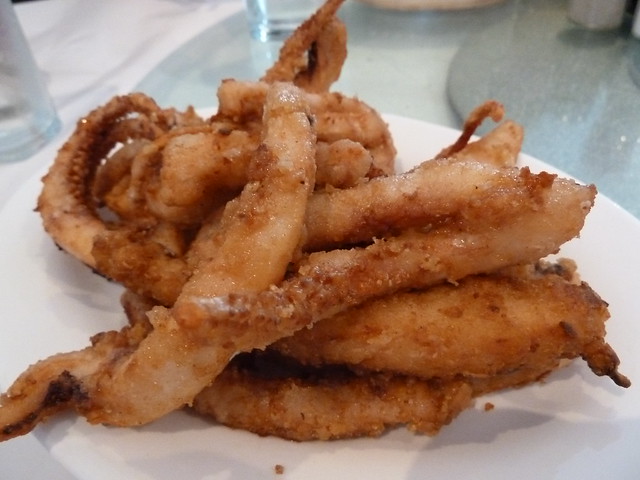 This squid obviously never skipped leg day.  Even though these calamari tentacles were really big, they weren't tough, and the light coating was great. 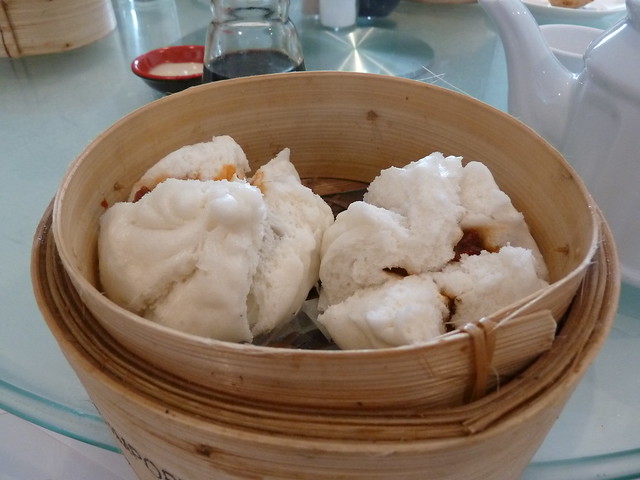 Just enough room for char siu bao - fluffy steamed buns with a warm dob of BBQ pork in the middle. 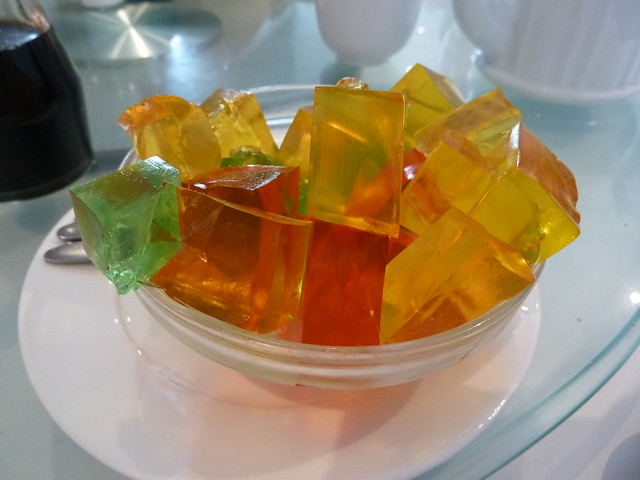 Something to keep the kids quiet while I go to pay the bill (which, for all of the above for a very greedy adult and three kids, came to $61.80)... 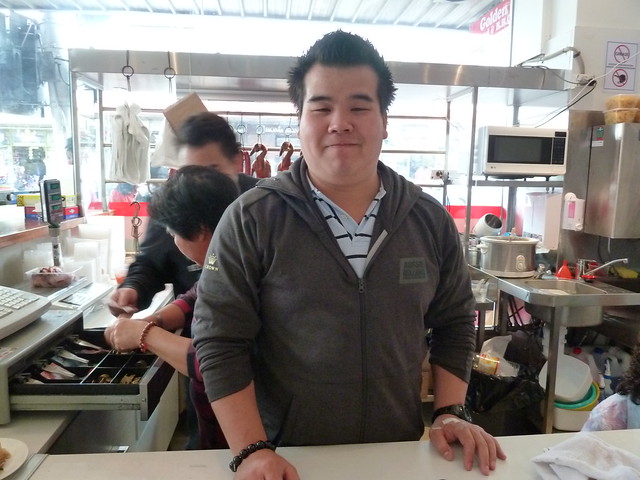 ...and after paying, I got chatting to Barry Diep, whose family restaurant this is.  All the yum cha is made in house.  There are some serious dumpling smarts going on here - one of the chefs is the ex-head chef of a Gold Leaf restaurant, and was coaxed out of retirement to saddle up the Golden Horse.  (Barry's uncle is one of the owners of the Gold Leaf chain, which includes Sunshine's Gold Leaf - a big favourite of mine.) 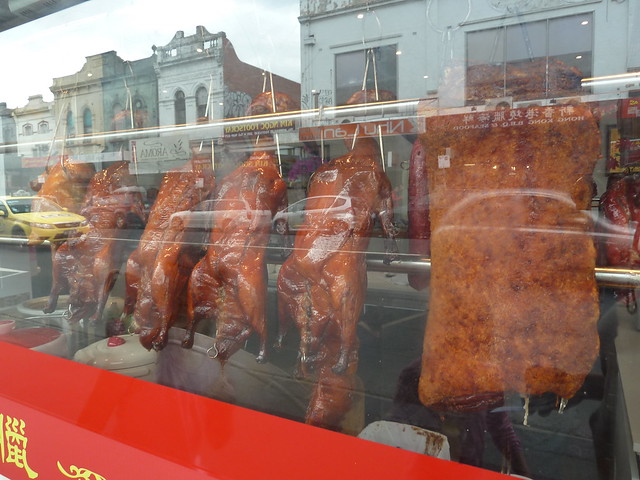 Barry's dad is also a chef at the Golden Horse.  He did his formal training in Hong Kong in the 1970s with an apparently very highly regarded chef of the time, and one of his fellow students was the current head chef of Laksa King.  He has been cooking since he was eight, including up and down the length of Vietnam.  As such, Barry reports that he was exposed to French techniques and ingredients.  His signature dish is snow crab with foie gras.  CAN YOU SAY HELL YES?! 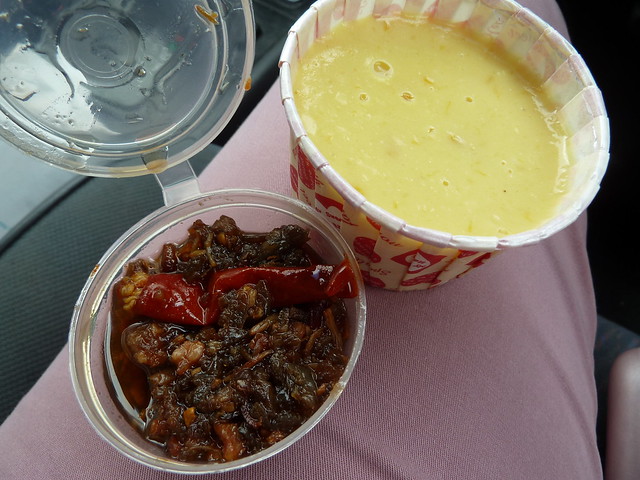 Dad's other specialty is his XO sauce.  Barry kindly gave me this little pot to take home and try, while the kids all got a mango pudding each.  The sauce is a knockout and the puds were all fantastic - they had tiny little real mango bits in them. 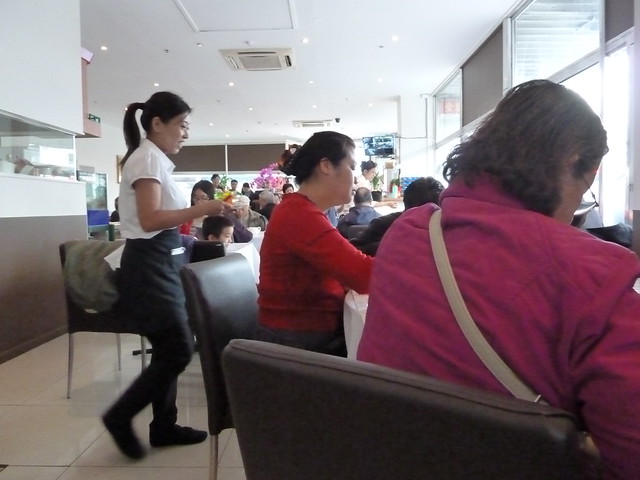 I really like the Golden Horse.  Eating yum cha in a big dim sum barn can feel like you're on a conveyer belt, but this is a really friendly little place.  This site is an iconic one for the suburb, and it feels so right to have a big, busy yum cha restaurant full of people right here in the guts of the 'scray.  I love that everything's made here, and afterwards the insatiable salt/MSG-induced thirst that normally attacks me after a yum cha session was nowhere to be found.  Can't wait to come back in the evening and try the a la carte stuff.

You could say Footscray is now a one-horse town, and I think it's all the better for it.

In case you missed Friday's post - Footscray Food Blog's next round of independent tours is now on sale!  Get the dates and details here...

Posted by Lauren aka Ms Baklover at 3:30 PM