Disclaimer:  I attended Sunshine Pho Fever as a non-paying guest. 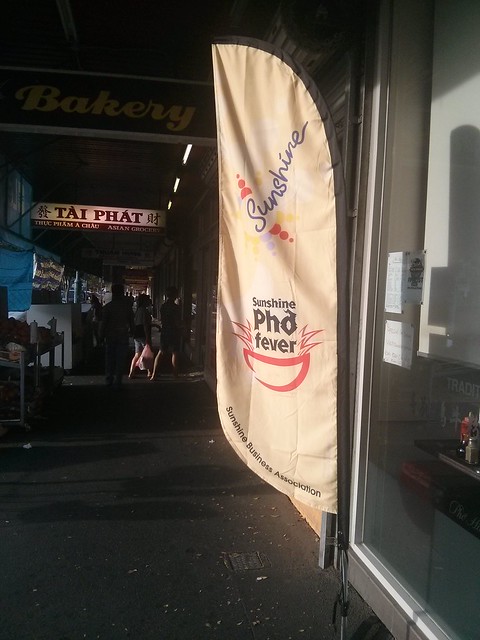 I first got bit by the bug in 2013.  Despite plenty of booster bowls throughout the year, the minute the invite landed on my desk, I felt the fever take hold yet again.  I was off to Hampshire Road to sample some of the finest soups Sunshine has to offer - presented as part of Sunshine Phở Fever. 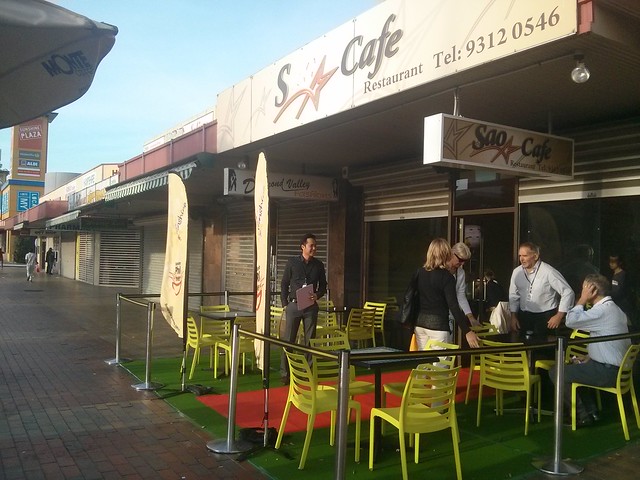 It was Phở Fever's second year, presented by the Sunshine Business Association as part of the Melbourne Food and Wine Festival.  The 2013 series was particularly epic, involving three huge bowls of phở, so this year's promised to be tweaked a little, adding other liquid refreshment alongside the signature soups. 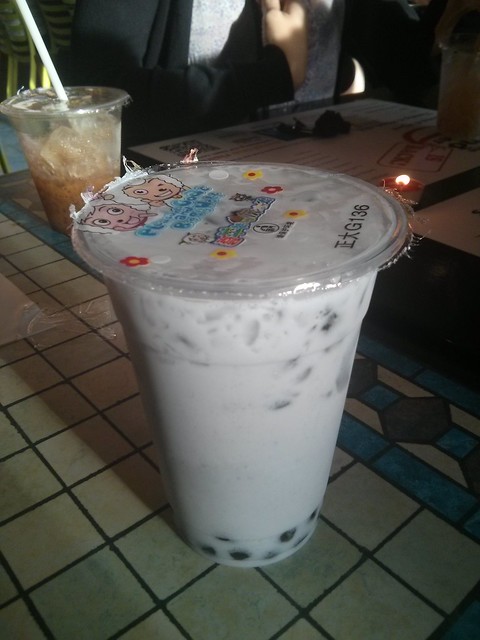 We kicked off at Sao Cafe, where we scored our choice of Vietnamese cold drink.  My taro bubble tea was fine but really, filled as they are with grass jelly cubes and chewy tapioca balls, these drinks are a meal in themselves.  Should have gone for a cafe sua da - but post-Rickshaw Run, I needed all the sleep I could get! 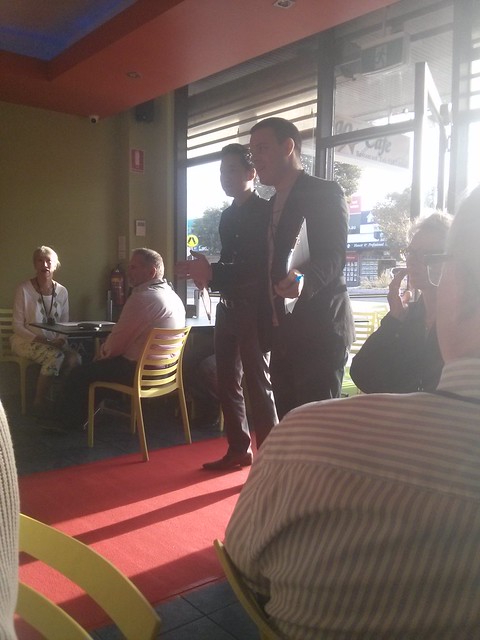 Simon of Brimbank Council and Win of the Sunshine Business Association were welcoming and informative hosts... 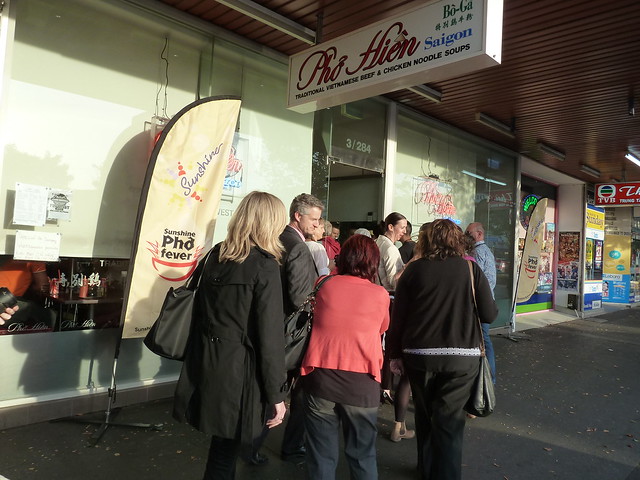 ...and after a short chat, we divided into two groups and were led us to our first stop - in my case, Phở Hien Saigon.  A recent SBS Feast competition voted the phở here the second best in Victoria.  (The winner?  iDo Kitchen in Albert Park - now closed, apparently!) 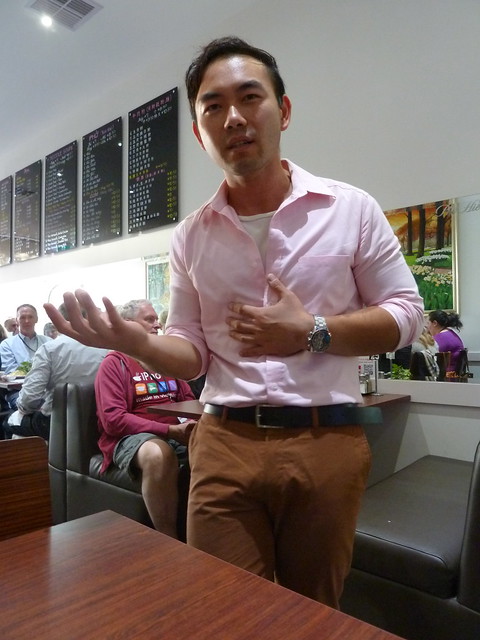 Owner Cung has had his restaurant for five years and in the last year has taken over the shop next door, doubling its size.  The phở recipe was originally his uncle's, but Cung has tweaked it in response to his customers' desire for a "less intense" flavour and a clear stock. 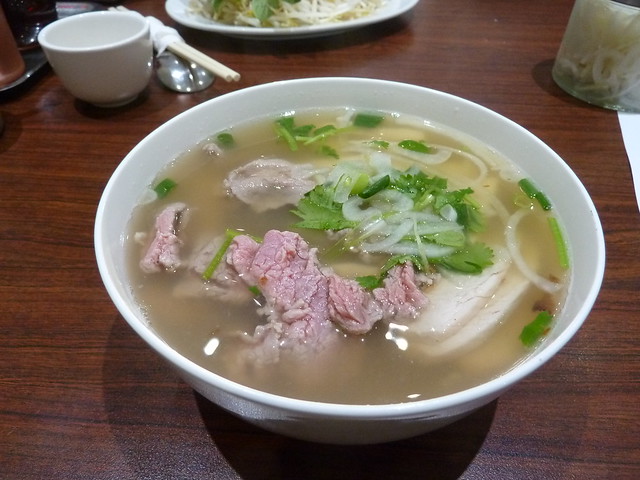 This is really good phở.  In some broths you can really taste the spices - the star anise and cinnamon - but Phở Hien Saigon's is milder and "cleaner".  Isn't it a pretty bowl, too?  "You do eat [with] your eyes," said Cung. 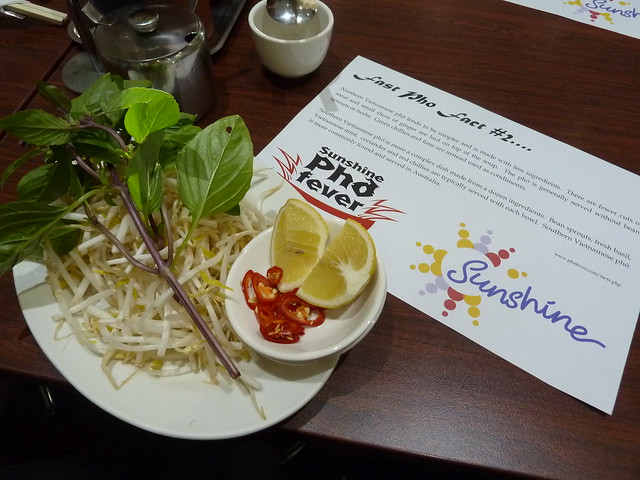 The broth here is a combination of beef and chicken stocks, made separately and combined to serve.  See the sugar canister on the table?  That's full of chilli oil.  I normally have this on the side to dip my meat into, but at Phở Hien Saigon, it's particularly good added to the broth itself. 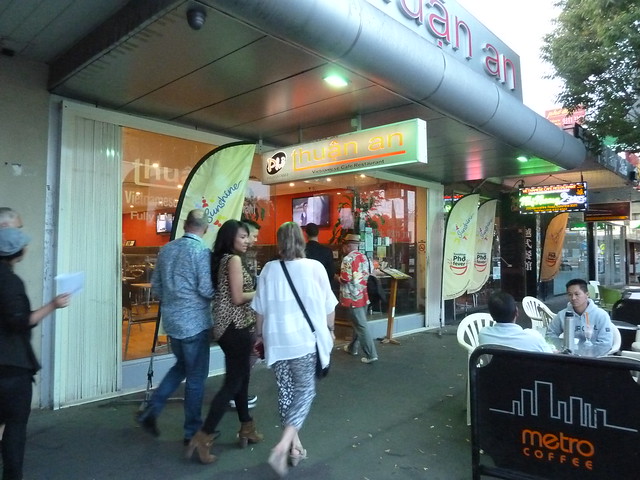 A short stroll down the street and we headed into Thuan An. 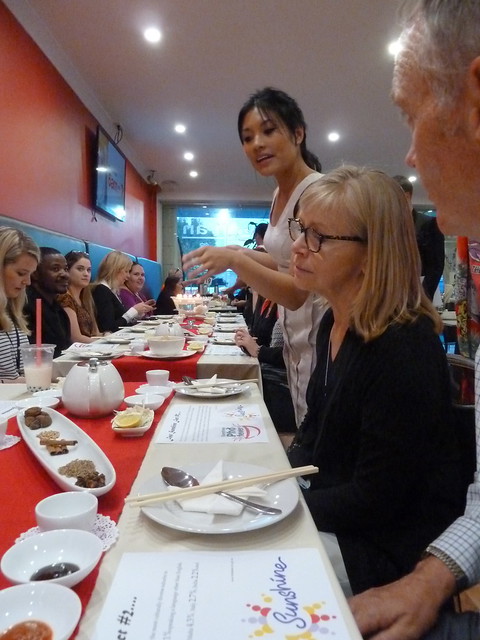 Here, Julie explained that her family's phở was neither strictly northern or strictly southern, but rather was adapted to "please both regions". 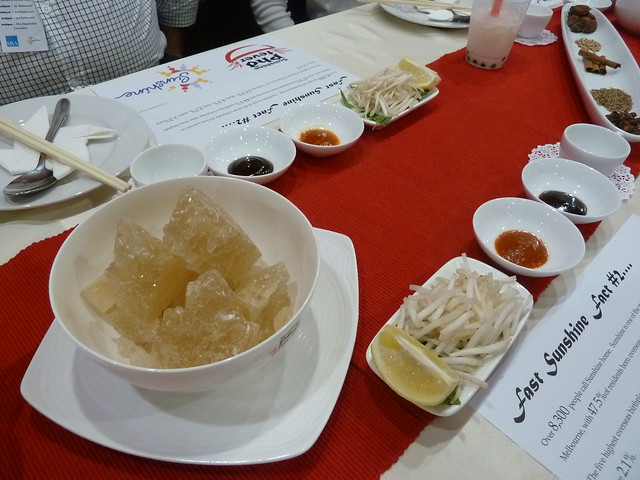 The table was beautifully set with some of the secrets of the phở pot - rock sugar for sweetness... 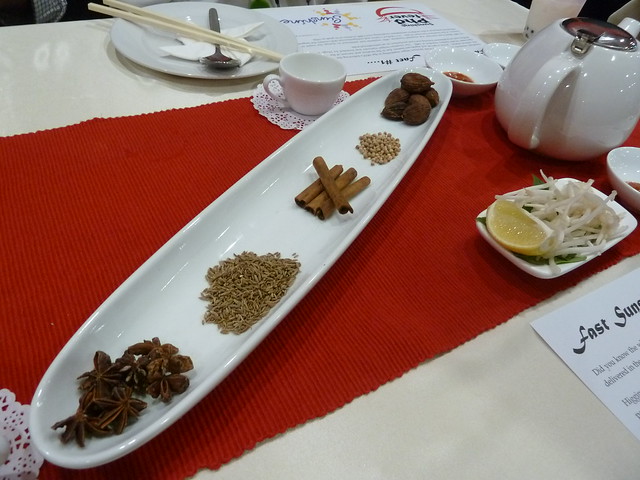 ...and spices, including star anise, cumin, cinnamon, coriander and black cardamon.  At Phở Hien Saigon, the broth bubbles for 12 hours, while at Thuan An, it's an 18-hour simmer.  Julie explained that each spice is added at a specific time point to draw out precisely the right amount of flavour.  These aren't all the spices that go into the mix, either - there are more, used in smaller quantities but no less important. 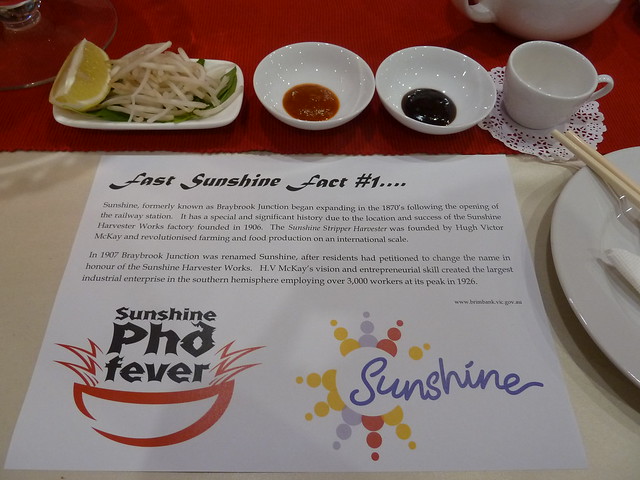 Thuan An had blanched and trimmed their bean shoots for us, which was a very nice touch.  Next door are two small bowls of chilli sauce and hoisin sauce.  People sometimes squirt these into the broth, but you're not really meant to - the idea is you dip your meat in them sparingly. 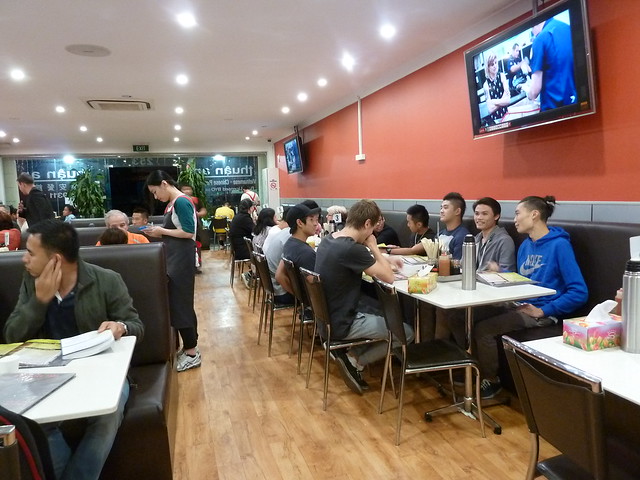 Julie explained that in Vietnam, phở is often a breakfast dish.  It's served in much smaller portions than here in Australia.  She reports that when folks head here fresh from Hanoi or Saigon, they are staggered at the size, particularly at Thuan An where the soup is served in enormous square bowls. 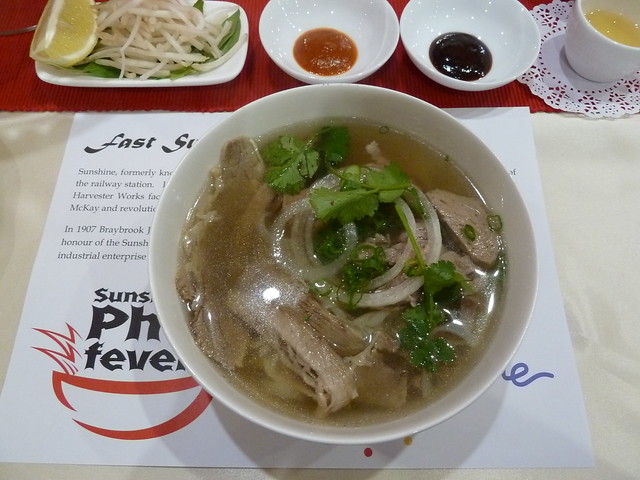 I thought I'd go wild and crazy and have a phở dac biet, which is phở with all the "bits" - brisket, beef ball, tendon and tripe.  In the end, I just like good old sliced beef and sliced chicken, though.  Thuan An's broth wasn't to my taste - I found it really sweet.  But what I did love was the sliced beef in this bowl - super thinly sliced and full of flavour.  Julie explains that Thuan An use scotch fillet (Phở Hien Saigon use round).  She says to come back and try other beef-based dishes, like the bo luc lac or diced beef with garlic - her parents are meat wholesalers so they know their stuff. 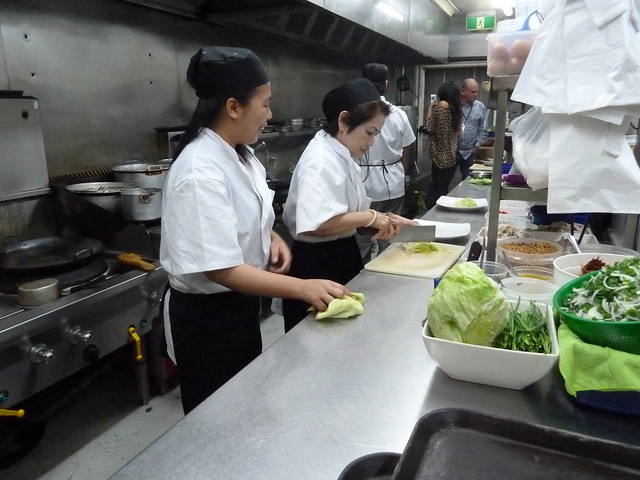 Next - what a treat, a peek in the kitchen! 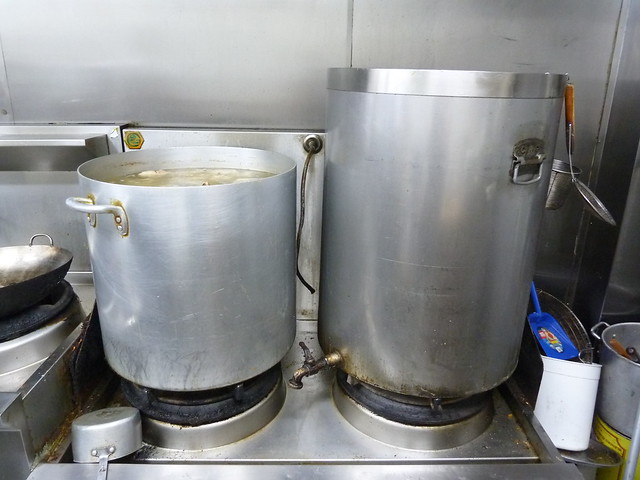 I don't know if I can call this a "pot" of phở.  More like a paddling pool's worth! 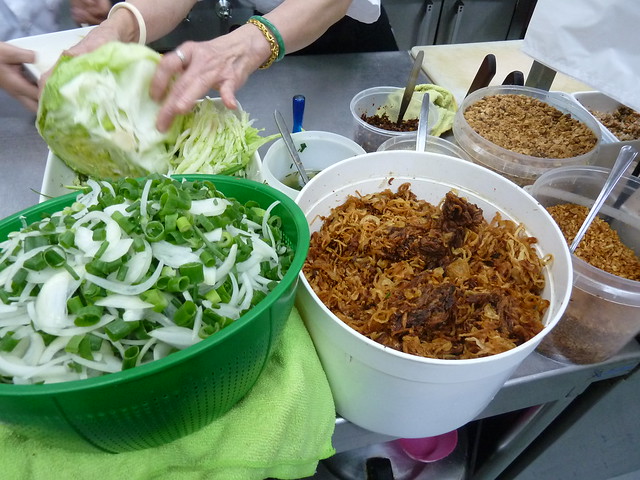 So much freshness.  I really need to come back soon and try more from the menu. 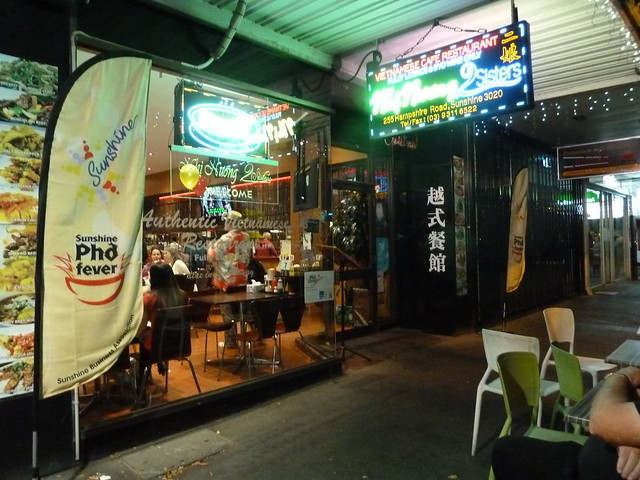 As we walked to the next spot, I swear I heard our bellies sloshing.  It was time for our last stop - Nhi Nuong (2 Sisters). 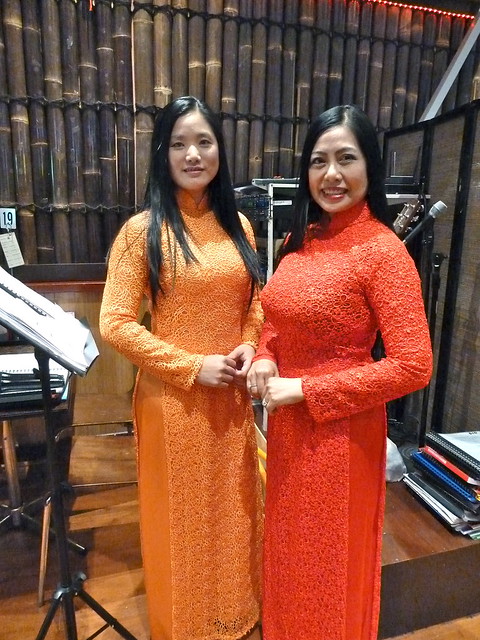 The sisters in question are Yen and Elizabeth, who as well as being passionate cooks, make up a talented musical duo.  They perform at the restaurant occasionally - you might catch them on a Friday or Saturday night. 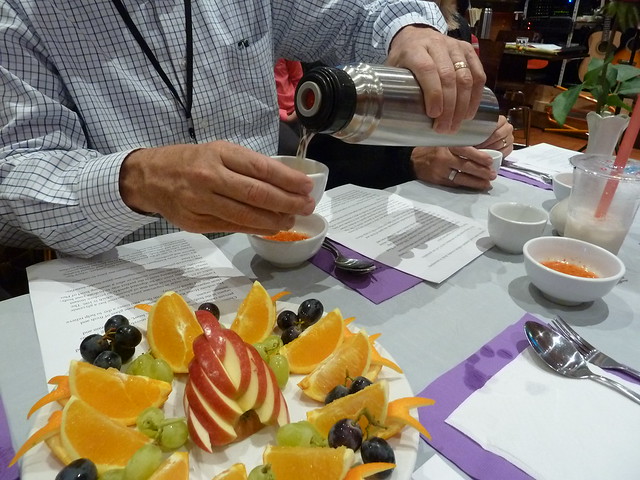 Elizabeth explained that the tea here is different to the standard jasmine you get elsewhere.  It's pandan tea, imported from Vietnam.  Apparently people come to Nhi Nuong just for the free tea! 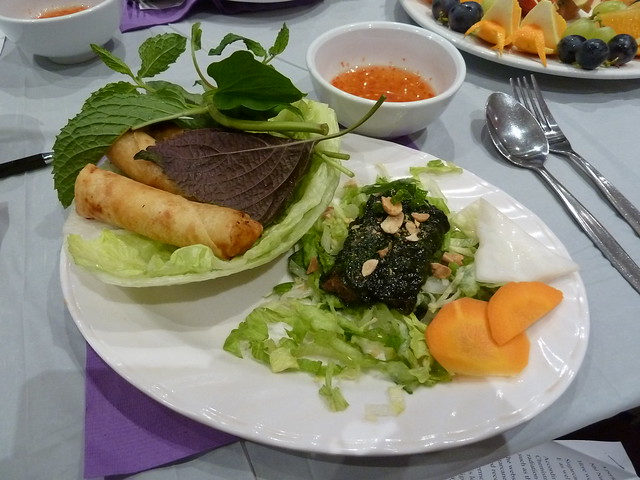 As well as beautifully carved fruit, we had really good beef in betel leaves (the betel leaves home grown in Queensland and specially sent down, apparently) and excellent, thick spring rolls.  Big points for inclusion of fish mint on the plate!  (PS:  You can read more about this and other unusual Asian herbs in this piece I wrote recently for The Age.) 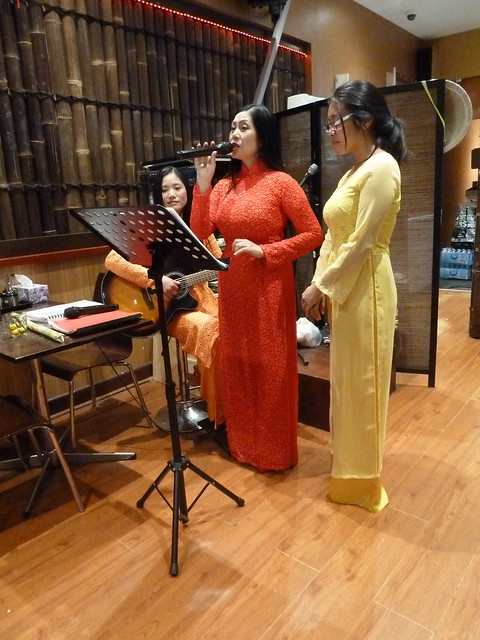 Elizabeth's daughter Daniella joined in to serenade us while we munched... 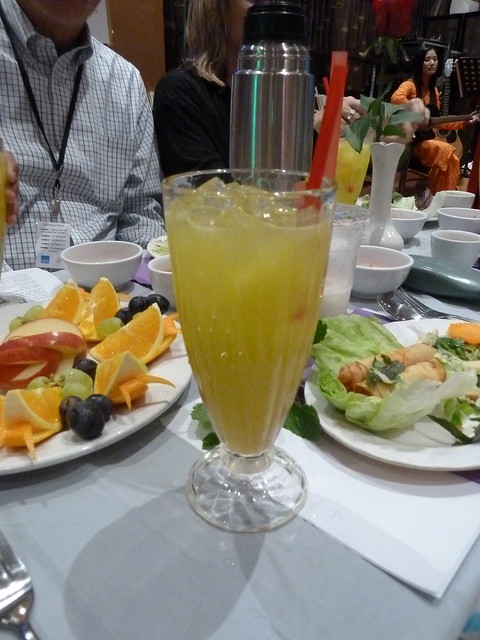 ...and then it was time for a long, cold glass of sugarcane juice.  This all-natural soft drink is made by feeding sugar canes through a wringer.  Elizabeth explained that back in Vietnam, kids would be given sections of cane to chew, particularly as they were waiting for dinner.  (Kind of like a Vietnamese Milky Way - won't ruin your appetite!)

Sunshine Phở Fever was a lovely evening, from the tangible pride of the business owners to the delicious food.  I was sitting near Paul from Kew who commented that eating phở like this is "like comparing shades of white".  In isolation, there isn't much to differentiate an ivory from a cream - but put them side by side and you can see the variations.  Likewise, I loved being able to eat different bowls of phở in such close proximity to each other, which is so useful in pinpointing exactly what your phở palate says.  And mine says - when it comes to phở, Sunshine is spoilt rotten.

Even if you think you can't stand hearing Gangnam Style one more time, watch this vid, featuring some of Sunshine's finest eats - it is an absolute cack!

Posted by Lauren aka Ms Baklover at 12:04 PM