One of the things I love most about the States is the perfusion of Latino food and culture throughout the country.  The Hispanic population of the States is growing and growing.  There are Latino TV channels, Latino radio stations, and whole neighbourhoods full of wonderful food, music, and culture.  Mexican food is right up there on my "to eat" list every time I return here, and top of that list is tacos al pastor. 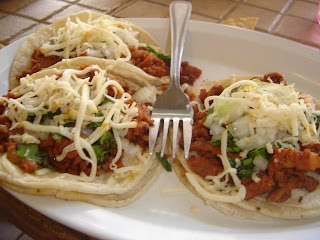 Tacos al pastor are tacos filled with chopped, seasoned pork.  The marinade varies widely on the taqueria, but is rich and tangy, with mild chilli.  The meat is piled on doubled-up soft corn tortillas.  Many taquerias will do either "American-style" tacos, with sour cream, tomato, and lettuce, or "Mexican-style," with chopped coriander (aka cilantro), raw onion, and cheese. 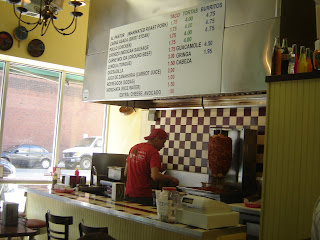 Tacos al pastor are a local interpretation of Lebanese shawarma, lamb on a vertical spit (similar to souvlaki or doner kebab).  Lebanese migration to Mexico began around 1880 in response to pressure from the fragmenting Ottoman Empire.  See here for a very interesting article about the intermingling of Lebanese and Mexican cuisine during this period.  Over time, the lamb became the more locally-available pork, a transition now only reflected in the name, "tacos al pastor" - shepherd's tacos.  Above you can see the spit, or "trompo", used in some restaurants to make tacos al pastor, although at the taqueria above, the raw meat was only presented on the spit; to serve, it was shaved off and fried on a hot plate. 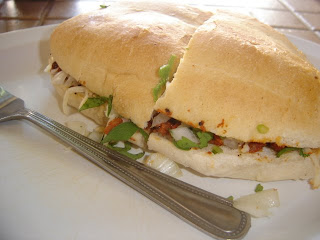 Another great Mexican street dish is the torta, a type of sandwich. The torta bread is soft and slightly sweet. This is torta al pastor. Divine!! 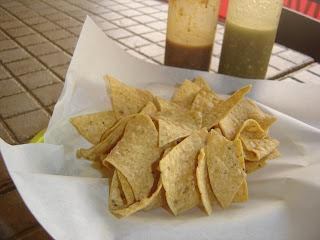 In every Mexican restaurant, while you wait for your food, you get an unlimited supply of homemade fried tortilla chips, usually with your choice of red or green salsa.  The red has a tomato base while the green is made with tomatillos, which resemble green tomatoes but are actually a separate vegetable altogether. 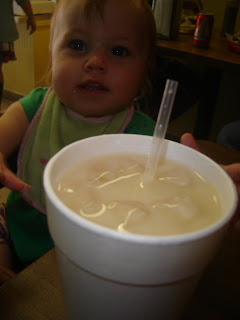 Another uniquely Mexican taste is horchata, a sweetened "milk" made from rice.  This refreshing, healthy drink is common across South America, but different countries use different bases, such as sesame seeds in Puerto Rico or different indigenous seeds in Nicaragua and El Salvador.  This tradition comes from Spain, where the drink was originally made with tigernuts, a type of tuber.  This plant and the tradition of making a beverage from it was brought to southern Spain by the Muslim "Moors," who ruled it from 711 to 1492.  This period, which spanned some of the darkest periods in medieval Christian Europe, saw huge developments in philosophy, science, and medicine.  It is known by many as La Convivencia ("the coexistence") for the relatively peaceful coexistence of Jews, Muslims, and Christians in Spain at this time. 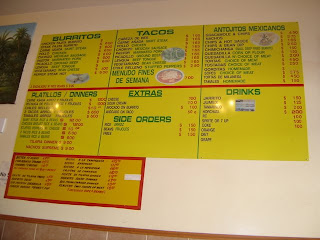 If I could import anything from the States to Australia, it would be a simple little taqueria like this one, Mr Salsa in Uptown. What passes for Mexican in Australia is nothing short of abysmal.  Real Mexican food is light, fresh, both very simple and very complex.  The regional variations are staggering.  I look forward to learning more... but always after a tacos al pastor starter!
Mr Salsa (map)
1025 W Montrose
Chicago IL
If you are exploring Chicago's restaurants, yelp.com is a great place to start.

Posted by Lauren aka Ms Baklover at 8:05 AM