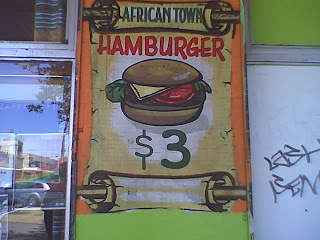 The first time I had Ethiopian food was when I was living in Washington DC.  Mr B and I got lost late at night trying to find a gig, and we ended up outside this little Ethiopian diner somewhere in the nation's capital.  We wandered inside and although we had no idea what was what, we were so delighted in the food, that was unlike anything we'd ever had.  Our hosts were just too hospitable - within a few minutes, the beautiful, hypnotic Ethiopian music and accompanying music videos was replaced by MTV! 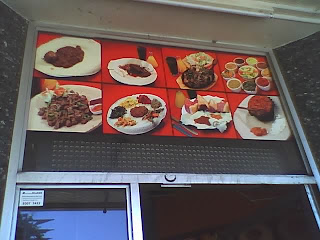 We were delighted to find so many Ethiopian restaurants to choose from when we moved to Footscray.  African Town became the firm favourite, although I must admit we became stuck in a rut and didn't try many others.  Don't let the crummy exterior put you off - step inside! 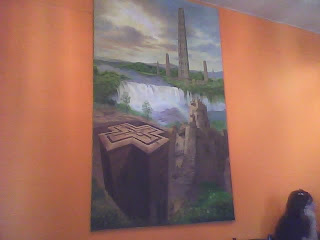 African Town always play Ethiopian pop music and I love its characteristic jangly rhythms, hand drum beats and the slightly staccato way the singers weave their tunes.  They have a bar where people come and go, stopping to chat and sip a short black (Ethiopia is the birthplace of coffee) or imbibe in a beer, Ethiopian or otherwise. 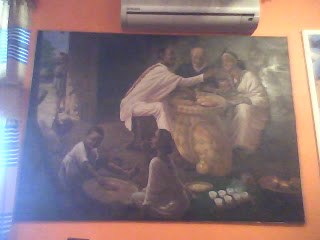 We chose a Non-Veg & Veg Combination ($18) and Lega Tibs ($10), which is cubes of lamb, onion and green chilli fried in butter and piled on injera (traditional Ethiopian bread): 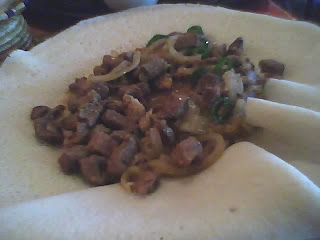 The Lega Tibs was good, with tender lamb, but I think they might have toned it down for us somewhat.  I would have liked lots more green chillies!  A word about injera:  it's made from a fermented batter, so it has a tangy sourdough taste.  It's cooked like a pancake that isn't flipped, so one side is covered in little bubbles, perfect for soaking up spicy juices.  Traditionally, it's made with a native Ethiopian grain called teff, but here in Australia it is made from a blend of different flours. 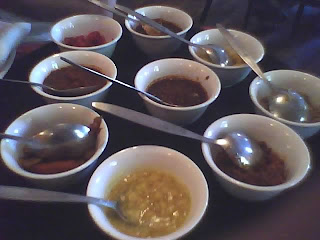 The combinations are a great way to try a bit of everything.  This one had nine different tastes, but not what was advertised on the menu.  I don't mind at all if restaurants substitute what is good on the day, but the last time I went to African Town, the exact same thing happened - they skipped some of the vegie dishes and replaced them with more meat ones, and I even think they repeated one.  Vegie dishes are often the most interesting - it's easy to make meat flavoursome, but to make a great vegie dish requires a defter hand.  Despite the great music and my cold Ethiopian beer, I began to feel a little disappointed.  There were no chicken pieces in the doro wat, it was mainly gravy, and not one of the dishes had any chilli heat.  This is not how I remember it being a few years ago, where each dish had its own discrete level of spiciness.  I wonder if now they are more popular, they are "dumbing down" their curries, as they think that is what the customer wants?
We had two Ethiopian beers each and it came to $22 each.  Despite my quibbles, the food was delicious and we were stuffed to bursting point.  The restaurant has really friendly service and a great atmosphere (they are really kid-friendly, too).  I just think it's time for me to spread my wings and find a new favourite.
African Town, cnr Nicholson & Irving Sts, Footscray

Posted by Lauren aka Ms Baklover at 7:02 PM