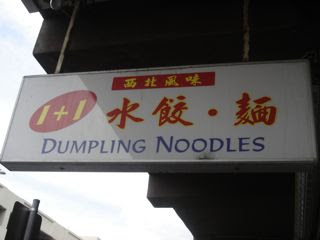 1+1 = 2, right?  A restaurant that is called, in part, "Dumpling Noodles", sells dumplings and noodles?  Nothing overly exciting there.  But this particular equation is a little more titillating than you might at first think, because the dumplings and noodles in question are actually Northwestern Chinese! 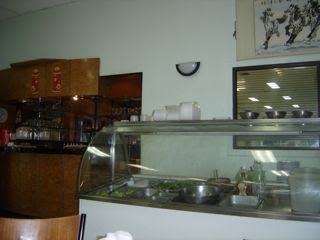 In this region of China, home to the Muslim Uighur people, lamb is widely eaten, wheat is the staple grain and potatoes are also enjoyed.  1+1 Dumpling Noodles will turn all your preconceptions of Chinese food on their head! 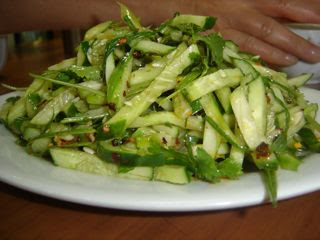 We started with the Spicy Salad ($6) - spanking fresh cucumber, spring onion and coriander in a sesame oil, rice vinegar and chilli dressing.  It burst with flavour and crunch.  We took this as an auspicious sign that we were in for something different, as mainstream Chinese cuisine avoids any raw foods, seeing them as too damp and cooling for the constitution. 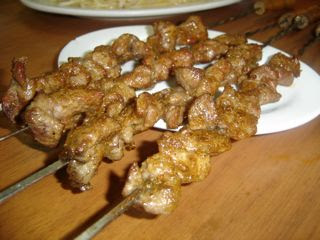 BBQ Lamb Skewers ($2 for 4) arrived, redolent with cumin.  It was a total trip to be sliding these tender, smoky morsels from long, wooden-handled skewers, surrounded by Chinese New Year kitsch and chopsticks, when our mouths were telling us we should be seated on Persian carpets, listening to qawwali!  These kebabs were seriously good. 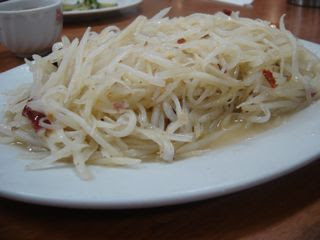 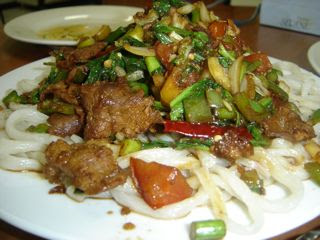 Boiled Noodles with Stir-Fried Pork/Lamb or Veg ($10) - very tender lamb with tomato, green capsicum, garlic chives and dried chillis on top of hand-made wheat noodles.  The meat was very tender and flavourful, in a simple sauce of soy and rice wine. 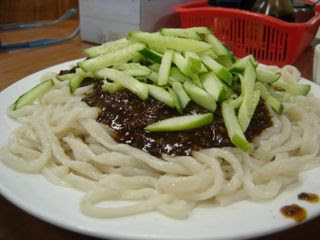 Noodles with Pork Mince Sauce ($9) - my dad makes this regularly with pork mince, brown bean sauce and hokkien noodles, and calls it Asian Spaghetti Bolognese.  Don't sneer - it's divine!  This version was good, but missing the sweetness one is used to with the brown bean sauce.  By far the standout of both noodle dishes was the noodles themselves.  Fat, juicy, toothsome, in irregular shapes and thicknesses that belie human hands rather than a cold metal extruder.  I could have eaten a whole plate of them with just a little (sacrilegious) butter.
Be warned though, the tables are sticky, the glass surfaces greasy and the bathrooms, abominable.  But if you are a patron of Camy's and the like, you'll just take such things in stride!
After so many new and exciting dishes, we couldn't go home without an encore, so the little theatre of Pho Tam's delicious iced coffees was a very worthy final act.
1+1 Dumpling Noodles, 84 Hopkins St, Footscray (opposite the market)

Posted by Lauren aka Ms Baklover at 8:21 AM