Last weekend, West Footscray Library put on a Vietnamese cooking class as part of the Chinese New Year celebrations.  I had visions of bubbling pots of stock for Pho, maybe even whipping up Bo 7 Mon, but we made rice paper rolls.  That is cool - they are so easy and healthy, and they deserve to be more widely made in non-Vietnamese kitchens, instead of being thought of as an exotic restaurant dish. 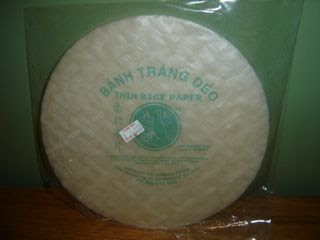 You'll need some rice paper sheets which you can get for next to nothing from any Asian grocer.  You can fill the rolls with just about anything, but the classic fillings are cooked pork neck, prawns, herbs such as perilla or mint, lettuce and rice vermicelli.  The prawns should be sliced in half lengthwise and the rice vermicelli soaked in boiling water until al dente.  You could also try bean sprouts, sliced fried tofu, grated carrot or white radish (try soaking overnight in rice vinegar and sugar first), julienned red capsicum, or deseeded and julienned cucumber. 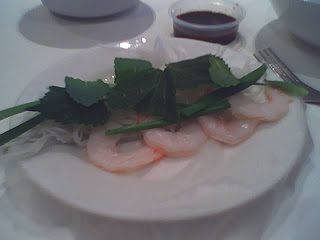 Fill a large bowl with warm water and soak the rice paper sheet until pliable.  Place on a plate or board and place your fillings in a line along the centre.  Don't over-fill!  Fold the bottom part of the roll closest to you up over the filling.  Fold the sides over towards the centre, then roll the whole thing away from you to form a neat parcel. 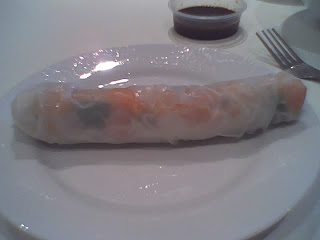 Eat with hoi sin dipping sauce.  I make mine with equal quantities hoi sin sauce and milk, with a dash of rice vinegar.  Heat until just before boiling and allow to cool.  Top with chopped peanuts.
These are so healthy, very low fat and very impressive!  My children love them, even though they are full of vegetables.  If you are going to make them ahead of time, wrap them in a damp tea towel so they don't harden.

Posted by Lauren aka Ms Baklover at 8:45 AM