I set out with two tasks - get an eyebrow wax and eat a banh xeo.  The beauty salon was packed, though, and the weather was decidedly un-subtropical, so I decided to opt for a stick-to-your-ribs lamb curry and a good read of my book. 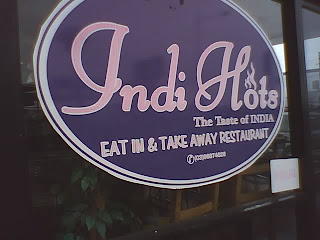 Indi Hots is at the far eastern end of the Footscray CBD.  The decor is basic, but the complex wafts of spice coming from the kitchen doors makes you realise they are just focused on the flavour.  The menu is written on a small whiteboard and various dishes glisten from the bain-marie.  You can choose from a chicken, egg, goat or vegie biryani, a thali (combo of 3 curries with 2 roti or rice) or a single bowl of curry, again with 2 roti or rice.  Nothing over $12, folks! 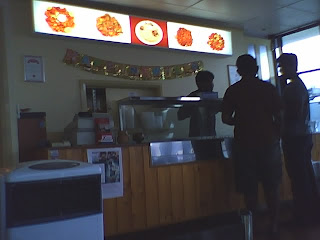 I was on a lamb-quest, but the very friendly server informed me that they only had goat.  Now I want to like goat like I want to be able to say I only use bicarb and vinegar to clean my bathroom, or like I want to be able to watch the whole of the PBS NewsHour with a concerned look on my face, nodding sagely, when in reality I fall asleep with my mouth open 5 minutes in.  Nevertheless, in a quest to better myself, I ordered a small goat with roti. 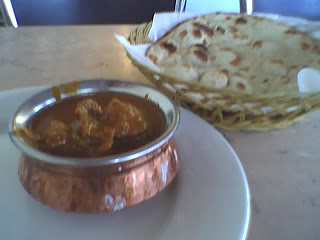 Now goat, if you have not had it, is like lamb on steroids.  It is so gamey it is outrageous.  This goat was good - really, really good.  The gravy was rich and redolent with really fresh spices, heady with cardamom and with an earthy base of cumin.  The meat was still on the bone (as is traditional), and it was truly melt-in-your-mouth.  If you are a goat fan, this is nirvana.  Me - I still have some way to go before I go the whole goat.  That said, I did lick the bowl clean. 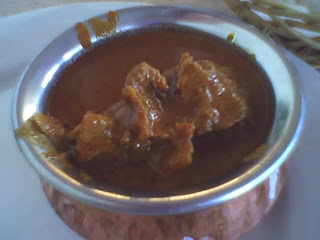 Thankfully, there is so much to love about Indi Hots, even if goat on the bone sounds totally unappealing to you.  The roti bread was fantastic - chewy, flavoursome but light.  Everyone knows naan, but roti is the Cinderella of Indian flat breads.  While naan is made with white flour and is usually leavened, roti is made of whole wheat flour and is cooked, rather like a tortilla, on an iron griddle.  I like both, but roti is much more flavoursome I think, due to the atta or sifted whole wheat flour used. 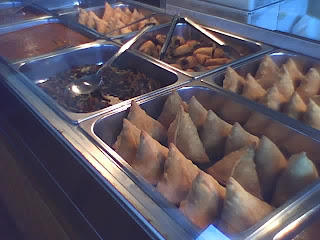 When I left, I had a look in the bain marie and it had filled up with a checkerboard of saucy delights.  There was the goat, as well as chicken and mixed vegetable curries, a dal, and an interesting dry-fried vegetable dish with peanuts.  Upon asking, the server explained it was tindora, which is apparently a type of gourd, also known as "Gentlemen's toes".  I am intrigued to try this next time!  There were also whole green chillies, fried in spongy chickpea batter, which customers were eating dipped in a little chutney, as well as a mini-Himalayan ranges of samosas, their little peaks standing upright in neat rows.
If you like your Indian food uncompromisingly authentic, Indi Hots should definitely be your next stop.  You will be rewarded with delightful service and a warm, inner glow.
Indi Hots, 5/68 Hopkins St, Footscray (near the corner of Hopkins & Moore)
See updated review here

Posted by Lauren aka Ms Baklover at 11:47 AM